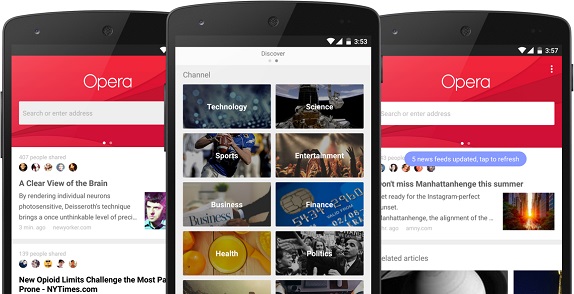 Seun* is a 55-year-old teacher who uses Opera News to stay informed on current events.

She says she just found it on her phone and started using it. Her tech-savvy teenage son, who is listening to our conversation, confirms that it came pre-installed on her android device.

She later complains that she’s tired of mostly seeing stories that are not true or misleading. Citing the announcement of when schools were opening this year as an example, she laments that a news story on Opera News said schools would not be opening, but they were.

Since it launched in 2018, Opera News has quietly made significant strides in Africa. With over 200 million monthly users, it’s already the biggest content publisher platform in Africa, with roughly 10,000 Opera News Hub stories every day. In terms of monetization, its revenue grew by 70% last year.

TechCabal recently spoke to Collins Udeme, the Editorial Manager for Opera News in Nigeria, to understand its journey.

“Opera News was born out of identifying an unmet need in the content industry. It was launched to provide a platform for smaller players on the street to share stories on what’s happening close to them,” he says.

Opera News first launched in Nigeria and Kenya in 2018 and then expanded to other markets like Egypt, South Africa, and Ghana in 2019.

In 2019, motivated by the desire to do more, the Opera News Hub launched to give people jobs first and feed its users with diverse content.

He goes on to explain this by saying, “Some people might have stories they want to share, but you might not take those kinds of stories to a traditional media house because they could ask you to pay money for it to be published or not accept it. Imagine a grandmother who is educated and has some experience to pass on to the younger generation of women via an opinion piece; she will most likely not go to a media house.”

Following Opera News Hub is Squad, a recent feature launched to foster a community experience. He describes it as an interactive channel that recommends content to you based on your interests and lets you talk to other Opera News users. He says it offers a Twitter-like experience, but unlike Twitter, it’s easier to understand.

When I asked what was driving the growth of Opera News, he attributed it to the user-tailored content. He says, “Normally, when people see a story, they want to go check if it’s correct on other sites, but with Opera News, the beauty is that it’s all on the same platform. Also, the app is data saving, since data is expensive in Africa.”

Udeme says Opera News has only two competitors: Facebook and Twitter. We want people to have this news as fast as possible, he chips in.

An analyst I spoke to earlier believes that “Every media publication is their [Opera News] competitor. Opera News is like Buzzfeed. It uses the news tag to make you think they’re serious with news, but they’re not.”

Early in the conversation and at different times, Udeme admits it’s been crazy keeping tabs on what the over hundred thousand registered users publish. There’s a quality problem, a problem he believes didn’t exist before the hub started.

I asked about control and how they ensure they’re not continually swimming in lawsuits.

He quickly points out that “At the end of every article, there’s a disclaimer that states who is responsible for the article. And if there are some concerns, affected persons can reach out to Opera News directly.”

Also, in response to such disputes, they check in with the writer, and if the writer can’t explain where they got the information from, they take down the article.

Speaking on how writers are punished for this act, he says it depends on how severe the mistake is.

“For some mistakes, like a clickbait problem or ‘soft fake news,’ we look at the writer’s history to see if it’s consistent behavior. If it’s just a one-off thing, we warn the writer. The next time it happens, we suspend or take the writer off the app. There are instances where the action is so severe that we take the writer off immediately.”

Opera News makes sure it addresses these issues within at least 24 hours. Due to these issues’ critical nature, each market has an operations team that deals with such complaints.

“Looking to the future,” he says, “for Opera News, the goal is to remain within the African news scene for a very long time.”  He believes there are still many people who haven’t heard of or used Opera News.

To do this, they have to ensure that Opera News is a credible and respected media platform that can deal with issues like fake news and clickbait appropriately.

Seun* would agree with this as she mentioned, at the end of our conversation, that her husband has already deleted the Opera News app, and she’d soon follow suit.