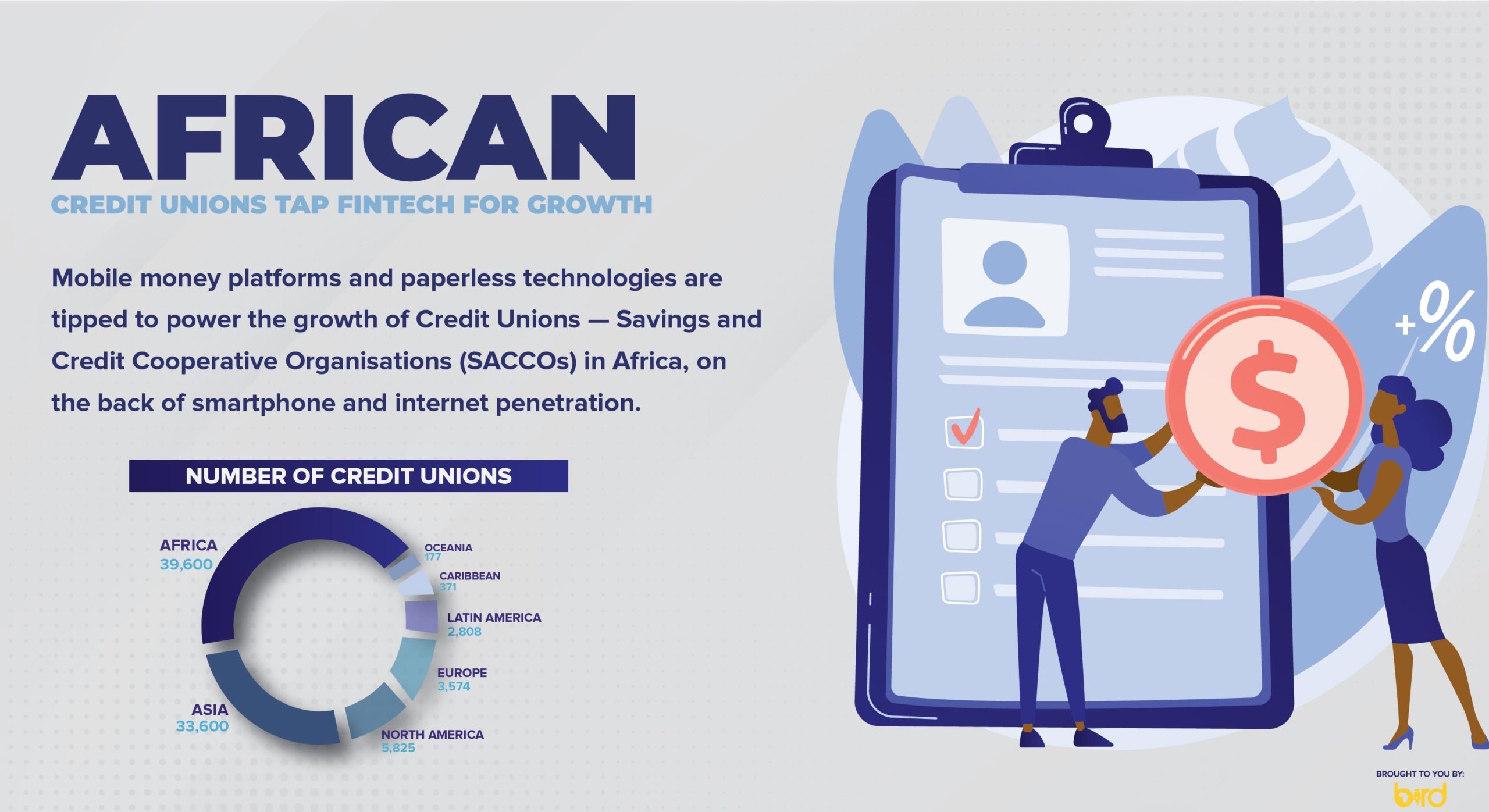 For decades, credit unions have extended small instalment loans and lines of credit to millions of African households. The sector is now adopting digital solutions to power its next level of growth and boost financial inclusion on the continent.

From table banking to credit unions, the savings and credit cooperative organisation (Sacco) sector in Africa is fast digitising to bring financial inclusion to all Sacco members.

In December 2021, Kenyan fintech Kwara – designed to help credit unions in the East African state shift to digital platforms – raised 4 million US dollars in a seed round from Breega and the SoftBank vision fund, demonstrating the level of interest and opportunity that exists in the sector.

Mategwa is upbeat that technological innovation will give underserved consumers access to a suite of financial services that would have been otherwise unavailable, or difficult to obtain without virtual services, such as credit, savings, and pension.

It is on that premise that he pushed for the launch of a KPS app called M-Tawi, which enables members of the Sacco to open a savings account, get a loan and pay bills using a smartphone.

According to Mategwa, the virtual branch (M-Tawi) of the Sacco is already the most active branch used by its members across the country.

He is hoping that similar adoption of mobile technology by other credit unions in Africa will lead to greater transparency and financial hygiene for all credit unions.

Mategwa hopes tech innovations will also help more Africans in the diaspora to join Saccos back home –– and use it to invest in the property market, their most preferred venture.

He said that tech has also made Saccos more attractive to individuals who traditionally used commercial banks to mobilise funds for investment since the former offers good rates.

With Kenya’s Kwara neobank app, individuals will be able to sign up with their preferred credit unions to access various financial services on the go.

“Kwara provides omnichannel ways for members of a SACCO to transact – web apps, Android, IOS, and critically USSD that is simple, well understood from mobile money use and does not require a smartphone. We will continue to ensure as many features as possible are available to all members of a SACCO,” Cynthia Wadia, Kwara co-founder and CEO, told Ventures Africa.

Meanwhile, the Kenya police’s Mategwa, one of Africa’s most sought-after credit union leaders, is pushing for a revival of the continent’s Saccos as a panacea for financial inclusion.

Mategwa is credited with helping set up the National Police Saccos of Malawi and Ghana, as well as cooperatives societies for the military of Zambia, Eswatini, and streamlining the operations of Ngome Sacco for the Tanzanian military and police.

Earlier in 2021, Mategwa met on the sidelines of the Western Block Regional Forum in Monrovia with Liberia’s Vice President Jewel Taylor to discuss ways of building a Sacco for Liberian women after it was discovered that most of them still prefer to lock cash in safes at home.

He is also having discussions with authorities in Sierra Leone to set up a similar outfit.

Credit union profits are returned to members, who are shareholders, enabling these institutions to offer lower rates on loans, including mortgages, and higher yields on savings products.

“By joining a Sacco you own the institution and at the same time, you are a customer. In case you make any surplus it is plowed back into membership. So it is a model that will improve the financial well-being of the people of Africa. Unlike commercial banks which make a profit and only plow it back to shareholders,” he said.

Mategwa and his team helped Kenya’s Police Sacco become a savings and credit cooperative behemoth, with over 67,000 membership and an asset base of 390 million US dollars (Ksh 44 billion) as of 2020.

It is now the second-largest Sacco in Kenya based on assets and is third in terms of membership.

Data from KPS show that 100 people join the Sacco each week, making it one of the fastest-growing credit unions in Kenya.

World Council of Credit Unions (Woccu) figures released in October show that international credit union membership increased by 29%, year-on-year in 2020, to over 375 million.

“(In) Asia, Africa, and Europe, men account for 60% of all credit union members, and in Latin America, women make up nearly half of all members. Similarly, in Europe women account for more than 60% of credit union board directors and 51% of chief executive officers, while in Asia more than 70% of CEOs and board directors are men. In Africa, Latin America, and North America, men hold more than 60 leadership positions, ” the report read in part.