If you’re an Android user jealous about all of Apple’s announcements on Wednesday, we’ve got good news for you.

New updates are coming to Android, and it’s more than just a notch or a dynamic bubble. 💀

First, Android is rolling out its version of the AirDrop, Nearby Share, a feature that allows quick and easy Android-to-Android file sharing.

There are also new sound alerts coming that will help hearing-impaired people listen for sounds like alarms or even knocks on the door. 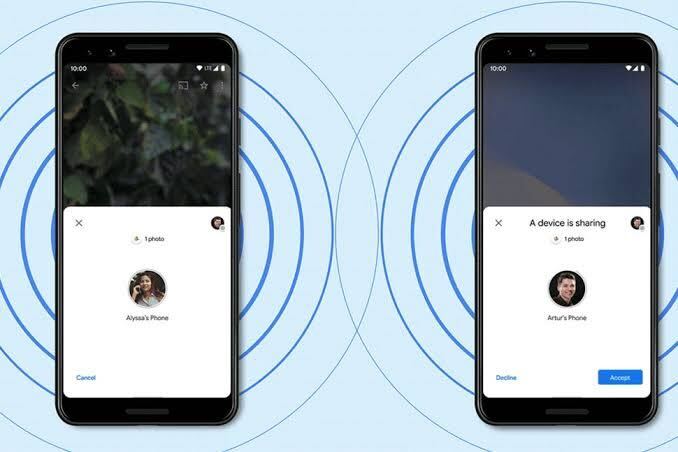 Apple or Android, we definitely will not be getting transparent glass slates or holographic phones this year, but at least there are new features that make all our phones look somewhat cooler. 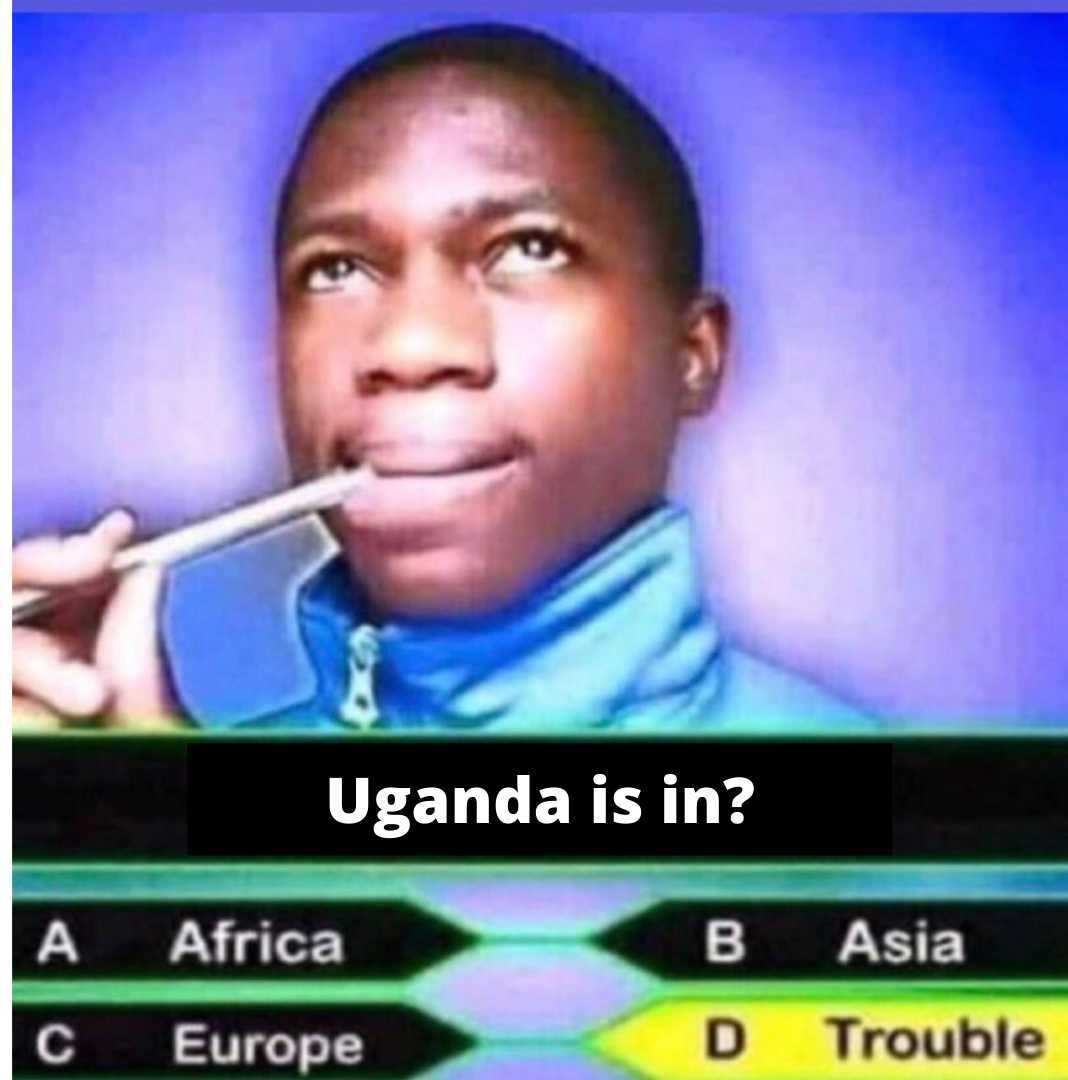 It seems that African governments may have found yet another thing to have in common—other than devaluing currencies and national debts of course: controversial bills on tech and digital issues.

Nigeria has its debated Social Media, Hate Speech, and NITDA Code of Practice Bills; Kenya has its ICT Practitioners’ Bill; and Uganda has recently come up with its Computer Misuse (Amendment) Bill.

On Thursday, September 9, during plenary, the House considered and passed the Computer Misuse (Amendment) Bill, 2022 with amendments.

What’s wrong with the bill?

According to the Collaboration on International ICT Policy for East and Southern Africa (CIPESA), it’s a “blow to online civil liberties”.

In July, a member of the Ugandan parliament, Muhammed Nsereko, proposed an amendment to the Computer Misuse Act of 2011, arguing that the present act doesn’t take into consideration sharing information across social media.

The bill wants to amend Section 12 of the act and criminalise hacking another person’s electronic device and publishing information obtained from the hack. The bill also proposes that no person shall write, send or share information which is likely to ridicule, degrade or demean another person, tribe, religion, or gender.

The bill proposes the adoption of penalties of a UGX 15 million ($3,900) fine, imprisonment not exceeding 10 years, or both for the listed offences.

While these amendments would naturally help national cohesion and deter cybercrime, countries like Uganda can and have used them to suppress free speech and digital rights.

For example, social critic, Stella Nyanzi, has been arrested and jailed at least twice for “insulting” Ugandan president, Yoweri Museveni, on social media—once for calling him “a pair of buttocks” in a Facebook post. More recently, acclaimed novelist Kakwenza Rukirabashaija, was detained and tortured after he made a series of tweets criticising Museveni and calling his son “plump” and “pigheaded”.

Legal critics also claim that the bill is filling a gap that isn’t there. CIPESA, for example, explains that the bill duplicates existing the Regulation of Interception of Communications Act 2010, and Data Protection and Privacy Act, both of which already speak to unlawful interception and unlawful access of personal information.

Many Ugandan critics don’t trust the motives of the bill, and they’re backed by the Ministry of Information, Communication Technology (ICT) which called for the withdrawal of the bill.

The bill has been passed by parliament but not without a few changes.

The parliament reportedly removed clause 7, the clause that lists out heavy penalties of fines, imprisonment and— unsurprisingly—disbarment from holding public positions for 10 years.

The bill will now be passed on to Museveni for assent, after which it’ll become law in Uganda. 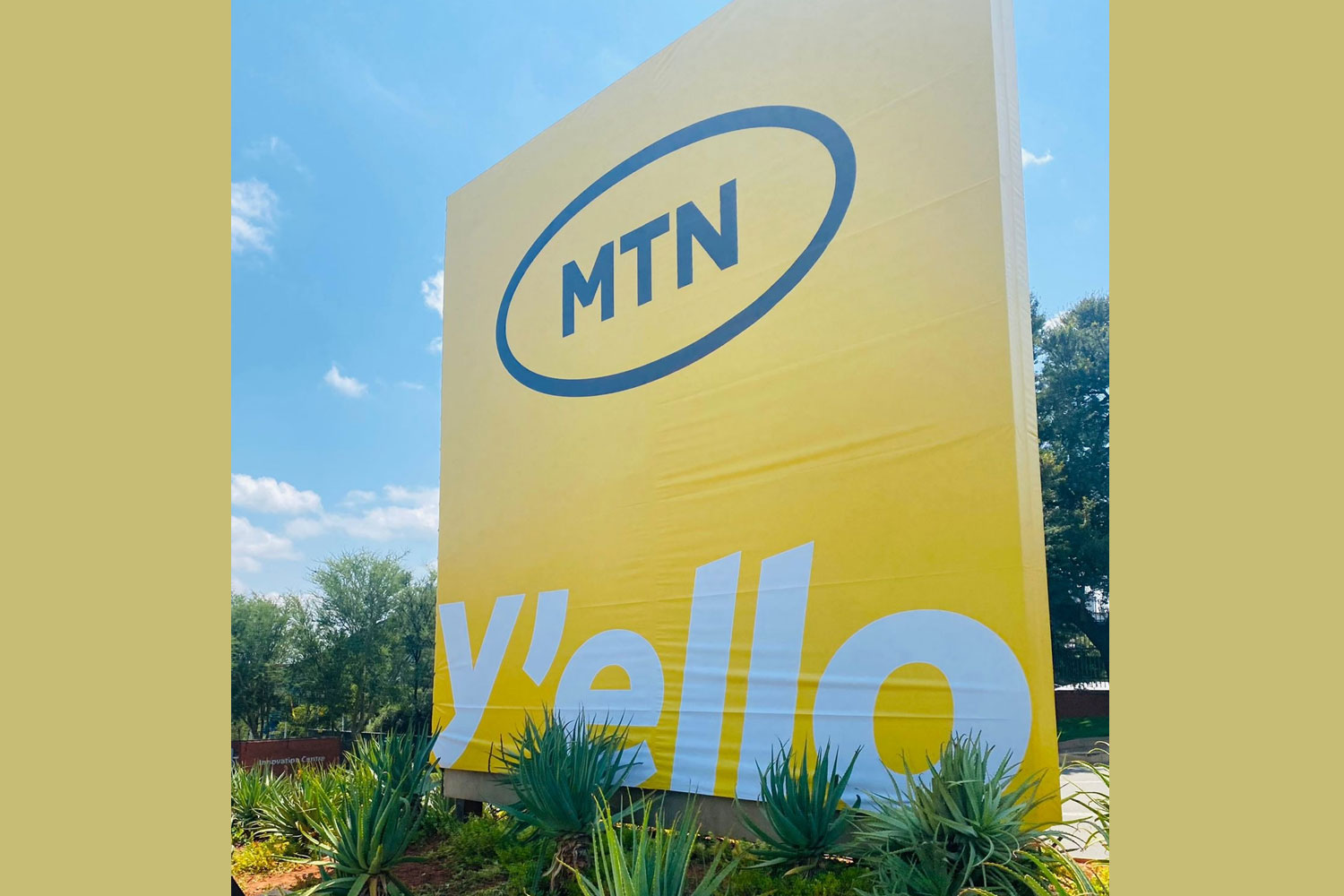 Ruth Moshabane, the junior accountant who allegedly stole R53 million (~$3 million) from MTN in the period from December 2010 to April 2017, has pleaded not guilty to the charges levelled against her.

According to court documents, state prosecutors revealed that Moshabane stole an average of R7.6 million (~$435,000) rands a year through 90 transactions over the almost seven-year period.

How did she do it?

The accused allegedly transferred money from MTN’s bank accounts to hers under the guise that she was paying for services to be provided by Mutual and Federal, and Guardrisk Insurance.

Moshabane had access to 76 MTN bank accounts used to pay its vendors.

A case of greed

The amounts only increased from then on including three transactions in August 2011, totalling R600,000. Two million rand was transferred in November 2013 and two R1.6 million transactions were actioned in September 2015.

She then proceeded to steal an average of R1.5 million each month for over a year.

Moshabane’s crime spree ended on April 2017 when Standard Bank notified MTN of the unusual transactions, leading to her arrest on April 11, 2017.

She faces 16 counts of fraud.

Zoom out: According to court documents, Moshabane reportedly had five properties registered in her name at the time of her arrest. MTN is pursuing compensation for the stolen funds as well as interest and legal costs.

The areas included are Soweto, Gugulethu, Khayelitsha, and Bushbuckridge. According to a statement seen by TechCabal, this is a move by the entertainment platform to drive awareness for digital literacy inclusion and advocacy for bridging the digital divide.

Speaking on the initiative, CEO of ThinkWiFi, Janine Rebelo, stated that the company is delighted to contribute towards promoting internet accessibility and reducing digital inequalities in our country.

“We are excited to be making a contribution to one of the most important needs of our people today. Opportunities on the internet for our youth are endless, but many South Africans do not have access to digital hardware, digital literacy skills, and internet connectivity. The latter reality is exacerbated by the high cost of data and the limited availability of infrastructure to support broadband penetration targets,” she added.

For TikTok, Fortune Mgwili-Sibanda, director of government relations and public policy for sub-Saharan Africa, said: “We understand that as an entertainment platform accessible on mobile devices, TikTok plays an important role in the digital world. With this pilot, we hope to encourage more people to join digital spaces such as ours to not only create content but to learn new skills and educate fellow community members about their passion and interests.”

Zoom out: At 78%, internet penetration in South Africa, is higher than the intra-continental average of 18%, and global average of 30%. Data in SA, however, is on the high side with 1GB costing an average of R34 ($2.04), slightly higher than the R27 ($1.54) national average daily cost of living. While it’s debatable if TikTok’s new initiative will change that, it’ll certainly bring some relief to many South Africans. 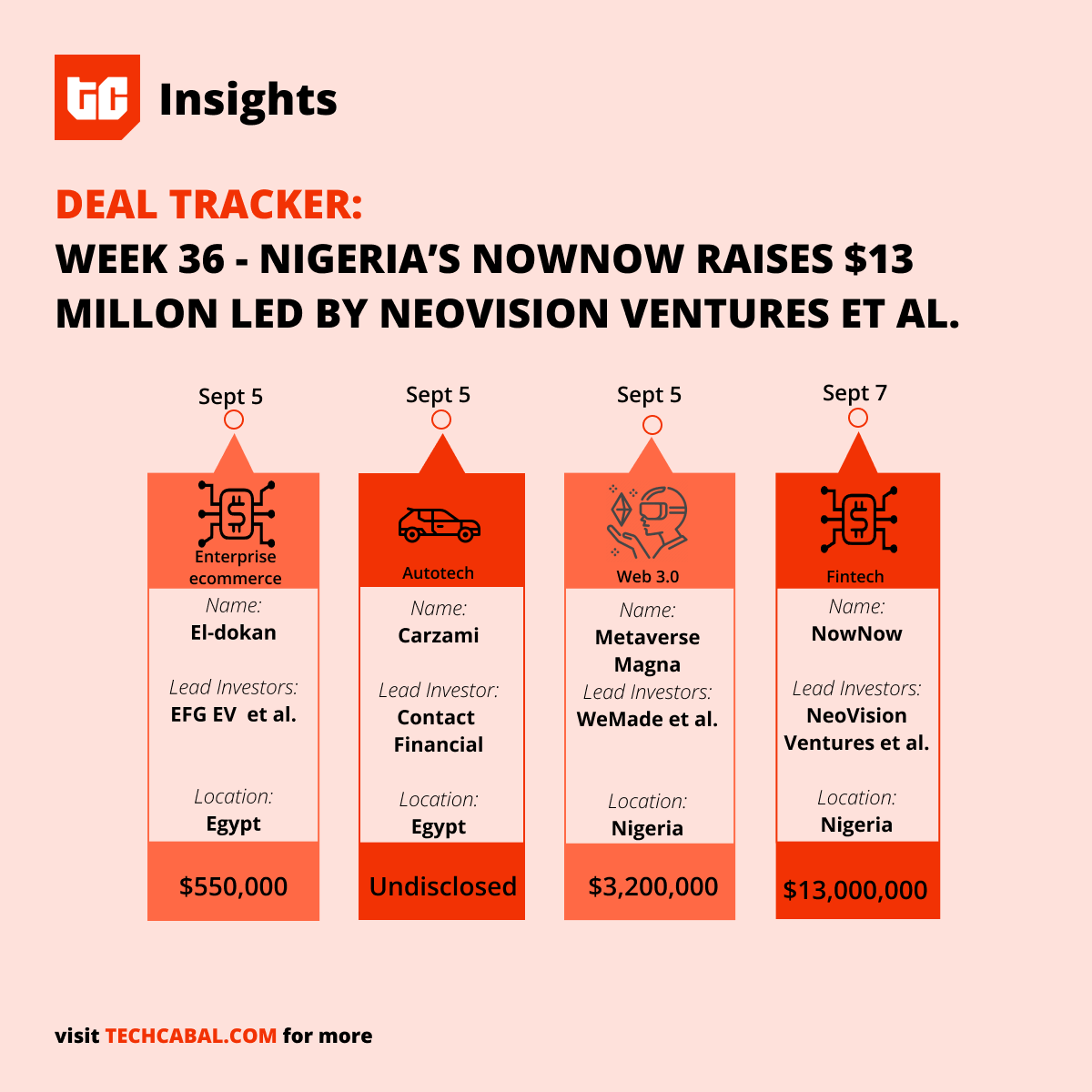 Sixty African startups have been selected for the second cohort of the Google for Startups Black Founders Fund. They will receive between $50,000 – $100,000 in equity-free funding, totalling $4 million, as well as up to $200,000 in Google Cloud credit. 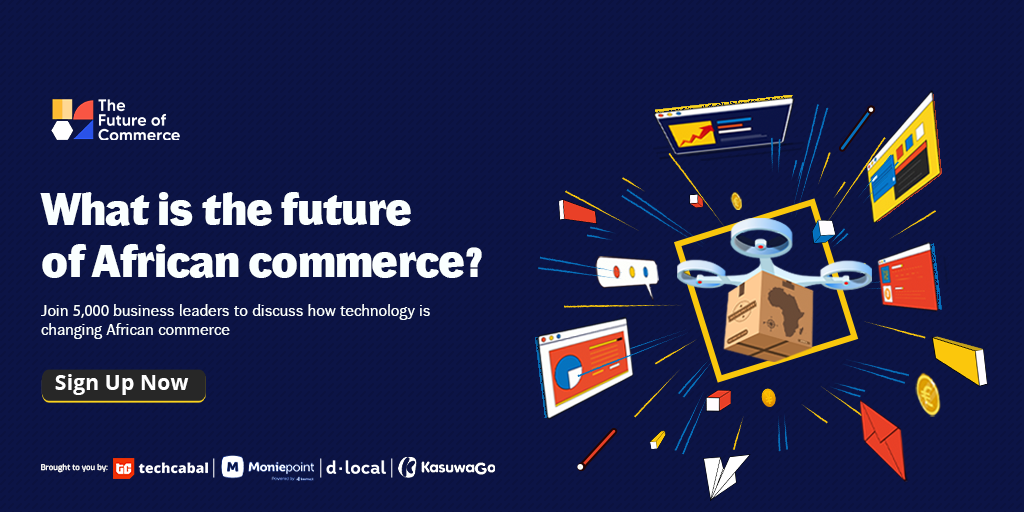 At the last edition of the Future of Commerce, we looked at all the changes coming to how we buy and sell, exploring trends across four key sectors—fintech, e-commerce, logistics, and mobility.

This year, the conference is targeted at Africa’s informal sector and the focus is on payments, logistics, mobile money, agent networks, informal trade, BNPL, and social commerce—all topics that tug at the heart of the African consumer and the stakeholders serving them.

Ever walked down the street to use a POS machine? Or added your card to streaming services like Netflix or Spotify? Maybe you’ve even used the buy-now-pay-later (BNPL) option to buy a new gadget. These payment trends are taking over, and they’re not slowing down.

On September 23, 2022, at the Future of Commerce, we’ll be talking about these trends and how everyone can leverage them.

Register now to reserve a spot.

The Future of Commerce is brought to you by TechCabal in partnership with Moniepoint, and sponsored by dLocal, Get QoreID and KasuwaGo.

The creator economy, virtual communities, and the future Of African arts.

On Thursday, September 22 2022, Endeavor Nigeria will host the 4th edition of Catalysing Conversations.

The hybrid event, with TeamApt as lead sponsor, is tagged “Building Big Bubbles… investing in the next generation of entrepreneurs”.