Elon Musk says the interior of the Tesla Model 3 will feel like a spaceship
News, Technology
Osarumen Osamuyi
4th April 2016

As it turns out, the final version of the Model 3 will look very different from the demo pictures we’ve seen. You’ll have to pay $1000 upfront and then wait till it’s released next year. Jeff Bezos Tweets for the First Time Since Joining Twitter in 2008, and Here’s Why
News
David Adeleke
24th November 2015

Jeff Bezos sent out his first tweet today since joining Twitter in July 2008. The tweet was to announce that Blue Origin had successfully sent a rocket into space and back, and achieved controlled landing. Do the geek stereotypes we’ve bought into for so long still apply? 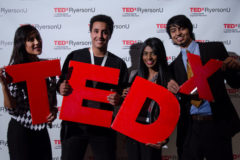 TED – Technology, Entertainment, Design – is a bunch of conferences organised by the Sapling Foundation, initially focused on tech and design, but now includes scientific and cultural topics. I’ve drawn up a list of 10 of my favorite tech-related TED Talks. Ever.