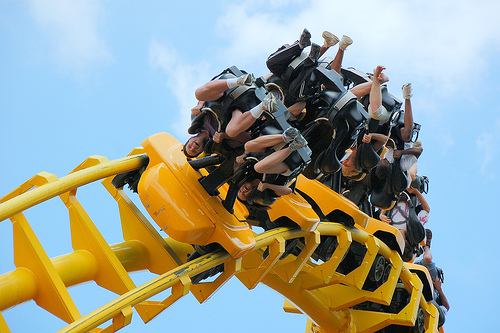 Read this even if you’ve stopped riding on it.

One of the most important and fundamental experiences I had while I worked in startups at different growth stages was observing how the entrepreneurs evolve with the changes of their business’s life cycle.

Everyone who makes investment decisions is looking for the recipe for an ideal entrepreneur. The person that will always be on the winning side; the person who will achieve a lot; and of course the person that would make the money. The sad part of my experience is that the more I know… the less regularities and rules I see (I know, Socrates noticed that circa 25 centuries ago).

For sure, I learned that one should not take for granted the enthusiasm and the seeming self-confidence that characterizes the early-stages of company making. The entrepreneur has it only when he or she can maintain this state while confronting his/her expectations with the market. When he/she is able to confront his/her illusions with the competition, and with the clients that don’t give a damn about the product.

Every time I see a young (not particularly in terms of age but entrepreneurship experience) self-confident guy, somewhere in the back of my mind flashes the stories from the books about WWII. The stories where young recruits with smiles on their faces are heading for the front while being watched by pitying old sweats.

I often see people who lose their self-confidence. People who start as self-confident players and end up as something that is the antithesis of this attitude. That is probably the saddest part of startups.

The most commonly repeated cliché about being an entrepreneur is to compare it to riding a rollercoaster. Unfortunately, this cliché is true. Permanent up/downs and hope/despair, all of this is too familiar to everyone who wants to make a business. It is especially true when you are an innovative type.

A friend told me once: “I see that you are at the informed optimism” stage. I remembered what he said and it motivated me to give this topic more thought and do some research.

I’ve found a theory, a chart. It is called: Entrepreneur’s Transition Curve. It shows how the attitude of every entrepreneur to his/her business changes with time. It clarifies its transitions in various business stages.

The easiest way to describe it is to use the following chart: One is the optimism that comes from ignorance. The blessed state in which the future is bright: “our idea is groundbreaking and the competition is so weak that it can be destroyed in three days after the product’s launch”. This stage’s lack of problems (the seeming one of course) is most often due to the simple lack of knowledge. “Lack of knowledge” – it sounds very negative but in spite of that it’s not that negative. Without that lack of knowledge (ignorance) the majority of great businesses would not have developed. There is a theory that by using only rational criteria one should reject every single new business idea. This initial ignorance is very often the blessing.

What is sure is that this so-called “uninformed optimism” starts to dwindle when your plans are confronted with the market. Time and speed can vary. Here one can see who has the strength of character. The disappearance of optimism is directly proportional to the increase of knowledge. Most entrepreneurs have a problem with saying goodbye to their expectations. Psychologists claim that in fact this is one of the most tough to handle processes: leaving our own illusions behind.

Having the knowledge means that we are entering Crisis of Meaning phase. Speaking like a human being, I’m sorry for the entrepreneurs who are in this stage. Speaking like a businessman, it is indispensible. Even if this text starts to look like something from a parenting blog, well I can’t find other comparisons. I need to say this: in this stage you either grow or die. Some call this period “The Valley of Death” (referring to the company’s life cycle).

Everyone has doubts at this stage. There are thousands of thoughts rambling in our head: “Maybe I’m too weak”; “maybe my idea is hopeless or non-feasible”: “maybe I’m too early to enter the market (or too late)”. It’s all natural human fear. For a vast majority of entrepreneurs, the most important catalyst is the fact that they are running out of money. This situation triggers something primitive in us.

The responsible managers worry about how they will pay the salaries. The less responsible ones worry about paying the next instalment of their personal loan. The ambitious ones experience the fear of admitting defeat. This is the moment that I described in the very beginning: “bigheads” (uninformed optimists) are being slapped in the face.

When I mentioned looking for an ideal entrepreneur, I’m sure it would be someone who could deal with all above-mentioned circumstances. You probably expect me to give you the recipe for this. I don’t know it. Frankly, I don’t even believe that such a recipe exists.

There are three simple things you should however focus on:

I’m not going to concentrate on the “Informed Optimism” phase. I wish you all perseverance in achieving this stage. There is no point in writing about simple things.

I have two more remarks. Nothing is given forever and achieving the dreamt-about success (Informed Optimism stage) doesn’t mean the eternal bliss. Once the environment, circumstances, and the actions of our competitions changes, you fall again in the state of lack of knowledge and then … yes. Welcome once again on the rollercoaster 🙂

The optimism that results from ignorance is treacherous and naive. Sure. There is still one thing that is worse than that: it is the so-called “uninformed pessimism”. Which is the state that paralyzes all initiatives: “I don’t know why but I’m sure that it won’t work well”.

It is better to be optimistically naive than pessimistically stupid. Which I wish to myself and to you all 🙂

I drew lots of concrete info from Cameron Herold’s blog and I strongly recommend it to anyone willing to dive deeper into the rollercoaster case.