Streaming IS The Future, But Nigerian Music Needs To Turn On The Tap 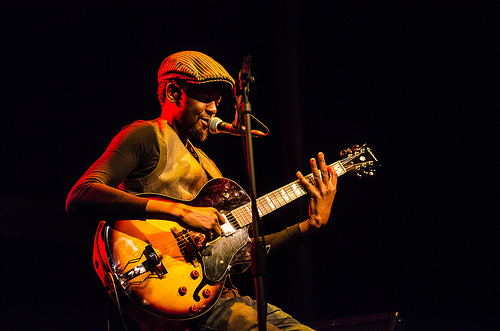 Last week, Adele’s manager, Jonathan Dickins, was reported as saying during an interview that streaming is the future whether musicians liked it or not. His comments followed news that Taylor Swift had pulled her entire catalogue from Spotify, the world’s most popular streaming service.

Taylor Swift is not the first musician to grow less than enamoured of the service, or with streaming as an income generator for the industry. Last year, Radiohead musicianThom Yorke described Spotify as “the last desperate fart of a dying corpse”, when the group pulled its music off the service. More recently, musician/songwriter Aloe Blacc published an op-ed in which he also expressed grave reservations about streaming as a sustainable source of income. How true, can it be then, that streaming is the future?

Looking at it from Blacc’s perspective, there might be a point about the reward system but I think rather than an indictment on Spotify, it’s more symptomatic of where the industry is, as a whole. Blacc writes –

“Consider the fact that it takes roughly one million spins on Pandora for a songwriter to earn just $90. Avicii’s release “Wake Me Up!” that I co-wrote and sing, for example, was the most streamed song in Spotify history and the 13th most played song on Pandora since its release in 2013, with more than 168 million streams in the US. And yet, that yielded only $12,359 in Pandora domestic royalties— which were then split among three songwriters and our publishers. In return for co-writing a major hit song, I’ve earned less than $4,000 domestically from the largest digital music service.”

If that’s what’s now considered a streaming “success story,” is it any wonder that so many songwriters are now struggling to make ends meet?”

It sounds dire, but that’s 168 million streams versus exactly how much in sales? According to this site, the track sold 237,000 copies when it debuted in July 2013 and only broke the 1,000,000 mark 5 months later in October. Take a look at Billboard’s half year charts for digital singles too. Album sales are down, and have been on the downward trend since 2010. Streaming and subscription revenues, on the other hand, are growing, climbing 51% in 2013 and crossing the $1bn mark (summary here; full report here). The head of Global Trends and Futuring for the Ford Motor Company has also been quoted as saying that “young people prize access over ownership.”

So, what’s the issue? Is Spotify, together with the other streaming services simply ripping people off?

The issue may be that content creators don’t fully understand the service yet. Chances are that many users don’t understand the back-end either (they don’t really need to, in all honesty), so if you’re one of them, you might want to check out this post. Another post suggests that Spotify has not sufficiently controlled the narrative and has allowed content creators and the media replace fact with fantasy.

In the latter post (the Lefsetz Letter), the point is made, agreeing with Adele’s manager, that YouTube is by far the bigger monster, paying far less than Spotify does, closely followed by P2P platforms, which pay nothing at all. The post however disagrees with Adele’s manager on some music being taken behind the subscription pay wall, because that would simply push users to YouTube and P2P, leaving the content creators with nothing.

Does this mean anything for streaming in Nigeria? Probably not in the near future. Unreliable mobile internet and expensive data plans mean that very few people without WiFi modems stream much. Furthermore, given that most of our musicians give most of their music away for free downloads, there is little incentive to explore streaming anyway.

So, perhaps the Nigerian market prefers ownership to access and this is all moot for now. But I’m an advocate for long-termism, and mobile internet will work someday and voice/data bundles will become more affordable for the streaming demographic. What then?

The current industry model will probably need to change in a year or two. Right now, the model for success is giving music away for free, hoping it becomes a hit that leads to RBT revenue and, ultimately, live performances. This sort of ties in with Dickins’s breakdown of how revenue streams for successful artists today –

You can see though that it’s significantly different, in that 70-90% of revenue will come from touring (not “shows”!) and tour merchandise. However, publishing revenues aren’t insignificant either. Enter, COSON (and its pursuit of digital royalties).

If RBTs are going to be the way forward here, then the crazy percentages that the telcos take of the gross revenue (60-72%, before VAS companies split the net with the artistes/labels) need to come down significantly. The music industry should lobby as hard as they can for legislation to support this (shouldn’t be too hard, with so many entertainers gunning for office in 2015).

If, on the other hand, the African market is to become as competitive as the foreign market, then the industry needs to support its domestic music streaming companies. Streaming kills piracy, and if the numbers are large enough (hint, hint, artistes and label execs), it will put money directly in their pockets. As Lefsetz says, “tech is all about scale” and “people who put brakes on the future end up screwing themselves.”

In conclusion, everyone knows that digital is here and analogue is gone. For Nigerian musicians to fully maximise  revenue from digital, given that their largest market is local, they may need to approach the issue a little differently.

Cabal
How To Protect Your Startup Ideas
Rotimi Fawole Cabal
How To Get Published On TechCabal
Bankole Oluwafemi