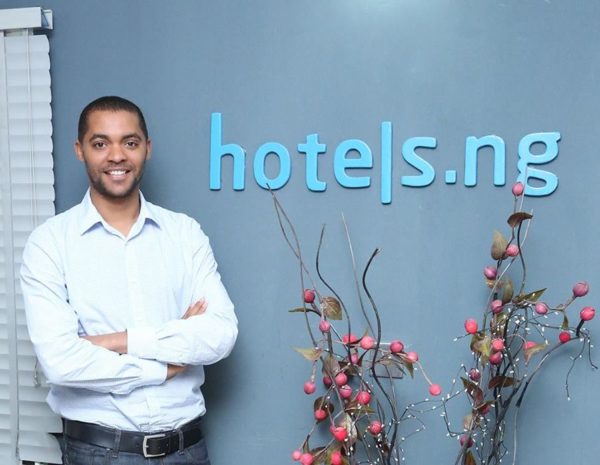 In what will likely be one of the most talked-about African startup funding events of 2015, Hotels.ng has secured $1.2 million from international investors Omidyar Network and EchoVC.

The Series A round comes after a previous seed investment of $225,000 from Spark, the Lagos startup “conglomerate” accelerator fund which iROKO’s Jason Njoku floated two years ago. Hotels.ng has come a long way from when it was a startup profile and PDF download on VC4Africa to one of the hottest internet businesses in Africa, in three years. More than 7,000 hotels are listed on its booking platform in 21 states of Nigeria. Over a million hotel search queries have been logged on its database. It reported turning a profit by the end of 2014. And now flush with cash, there is talk of expanding to Ghana and Francophone Africa.

“We’re forging ahead into relatively uncharted territory”, said Mark Essien, Hotels.ng’s founder and CEO, in a statement made available to TechCabal.

Mark Essien, who is well known in Nigeria’s tech ecosystem, and as far as I know, well-liked, has always looked, talked and worked the part has finally earned his way into Nigeria’s “super startup club” (TechCabal’s in-house reference for companies that have raised > $1 million). Perhaps it took him a bit longer because Mark is what you would call a technical founder, whereas most of the other successful internet business guys are mostly that…astute business men. Being a technical founder does have its advantages though, and is perhaps the reason why Hotels has been able to stay lean and function on relatively meagre resources compared to the heavily-funded Jovago, it’s unofficial nemesis, or even Wakanow, which has over time incorporated hotel bookings into its travel offering.

“A large part of cost is technology and operations, and engineering ability allows you figure out cheaper and faster ways of doing these”, Mark says. “I think having a technical founder allows you achieve 10x more with the same amount of money”. Investing in Hotels.ng is probably the best thing that has happened to Spark, which has committed over $3 million into an accelerator programme that has funded thirteen startups to date. Depending on the valuation at which the Hotels.ng raise was done, Spark will have scored at least a 2x return on that investment. And Hotels is only warming up. Of the round, Jason Njoku, CEO of iROKO Partners which owns Spark said;

“Closing on this funding round is a big win, not only for Hotels.ng, but for all African internet start-ups. It is proof, if any more were needed, that the Internet market in Africa is extremely appealing for VCs, more of whom are now looking to create value and build big on the continent”.

Africa-focused VCs are back?

Omidyar and EchoVC are joint investors in this round. Both of them are interesting. Omidyar has been more into social impact type ventures on the continent, and this will be one of its stronger for-profit plays. On the other hand, EchoVC’s activity on, if any, has been very soundless. As far as I know, they have never publicly announced a deal they’ve done, Hotels.ng will be the first. An overt commitment to Hotels.ng by both investors is a strong vote of confidence for the three-year old company.

But beyond that, the deal will do a lot to boost inbound investor in African internet companies. At the beginning of 2014, Jason Njoku spoke of a funding gap that was emerging as VCs looking at Africa come with the expectation of investing in companies that have already achieved millions of dollars in revenues. 2014’s liquidity events were dominated by the usual suspects: Konga, Jumia and iROKO who were merely receiving more cash to double down on clearly expanding markets. 2015 on the other hand has seen relatively new funding for relatively younger ventures like ACE, Bitpesa, Bites and Receiptful. Perhaps investors on the continent and abroad are beginning to rebase their evaluation of African internet and technology ventures.

But it’s not quite time for African technology entrepreneurs to expect that buckets of money will fall into their laps. It took Mark one year to attract seed funding from Spark, never mind that he’d gotten decent traction already. It took another two to get to series A. Perhaps because the African investor sensibilities even in 2015 still default to mining, retail and real estate, instead of technology.

Now in their third year, and 34 staff-strong, with undeniable growth, things have gotten to the point that Mark has been fielding investment and even acquisitory offers for a while now.

“At the start it was quite hard to raise investment”, he says. “Now that our numbers are strong and the business is growing fast, I am actually constantly getting investment offers. What’s important at this stage, though, is working with the right people”.

Mark Essien will be joining us on Radar tomorrow at 4pm (GMT +1) for a realtime interactive “ask me anything” session. We’re also discussing this post on this Radar thread.