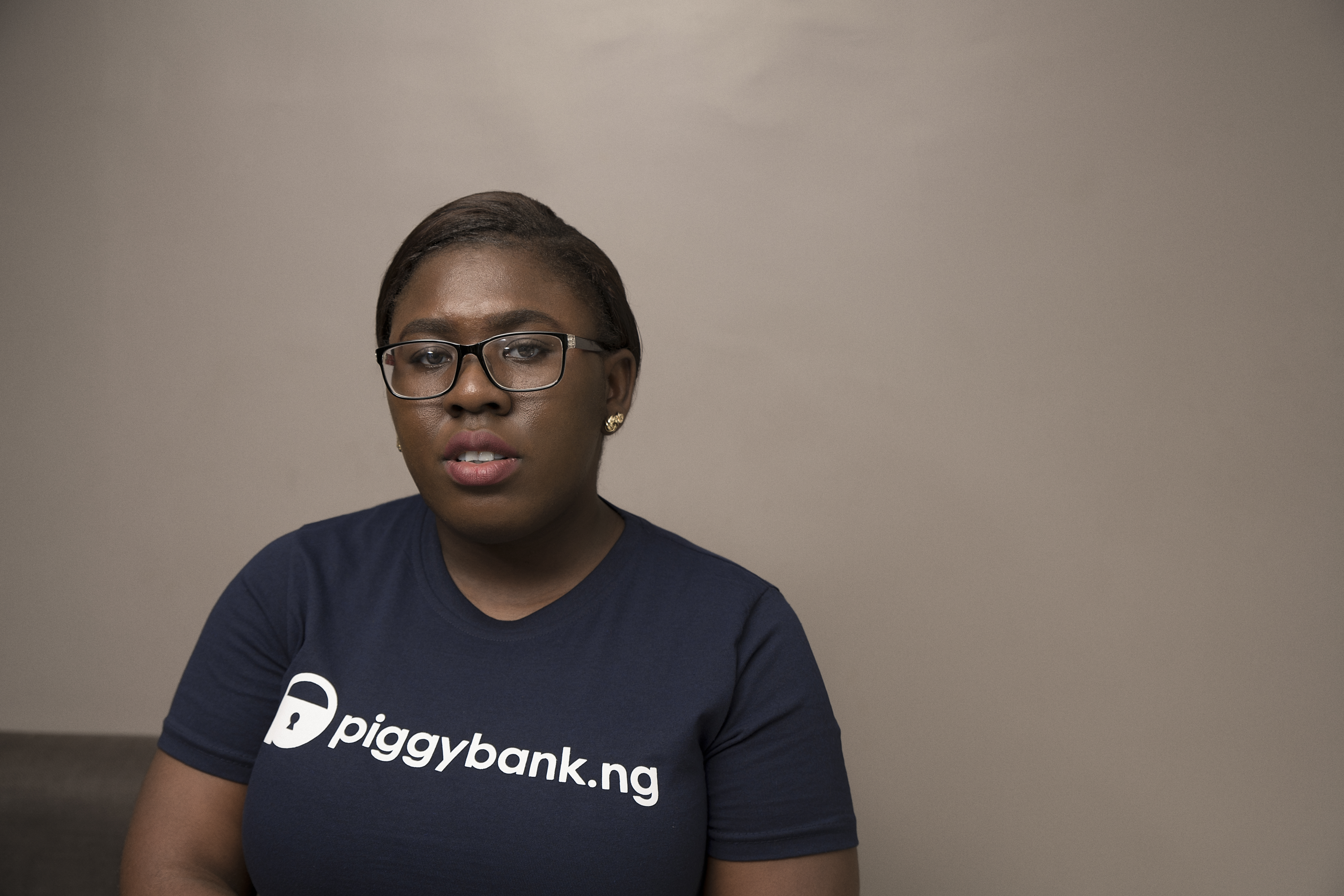 I had originally wanted to do an Odunayo Eweniyi profile back in August 2017. I’d recently started using Piggybank.ng and coincidentally, at a house party, I’d met two people who knew her back in Covenant University. They were both recent Piggybank.ng converts as well and the conversation somehow ended somewhere between “Odun is goals” and “Piggybank is such a great idea, why didn’t anyone think about this before?”

The story of a 24-year-old Nigerian woman (born and raised in Nigeria) who already had one successful company and another soon-to-be-successful one just four years after graduating college was too compelling not to consider. Unfortunately, it didn’t happen at the time.

It’s 1:04pm on June 5, 2018 when a (now 25-year-old) Odunayo walks into the cozy meeting room, just to the side of the general office area, where I had been asked to wait for her. Piggybank.ng, the [second] company she co-founded two years ago with five of her friends, has just raised $1.1 million in funding and she’s talking animatedly on the phone.

There is some kind of bank trouble (I couldn’t tell if it was Piggybank related) and she’s patiently listening to the person on the other end. “Will I have to come in to do the form thing?”, she asks the person. She takes off her backpack and jacket before taking a seat at the edge of the leather couch closest to me, still on the phone.

The call ends and she drops her phone on the table in front of us. “Sorry I’m a bit late. Google Launchpad kini,” she says turning to me and pushing her glasses further up her nose. “Oh, it’s fine,” I respond. “Thank you for speaking to me. I’ve wanted to this for a while. I don’t know if you remember but I reached out last …” “Yes! You sent a DM last year,” she says, leaving me a little surprised.

I spent the next hour and fifteen minutes having a conversation with Odunayo and at the end, I had been educated, inspired and impressed – all at the same time.

As the first child of two professors, Odunayo had always been about her books. She breezed through primary and secondary education with top grades before attending Covenant University, a controversial church-owned college that has produced a curious number of millennial startup founders and also where she met her business partners.

Growing up, Odunayo wanted to be a doctor. “I wanted to be a doctor but I feel like there is a certain level of empathy you need to become a doctor and I don’t think I have that,” Odunayo said. “So when it was time to fill JAMB form, I put Computer Engineering instead. My parents made sure I went to Covenant University [which I love, by the way – just in case they read this], to avoid any of that strike business and I’m super thankful to them for that.” 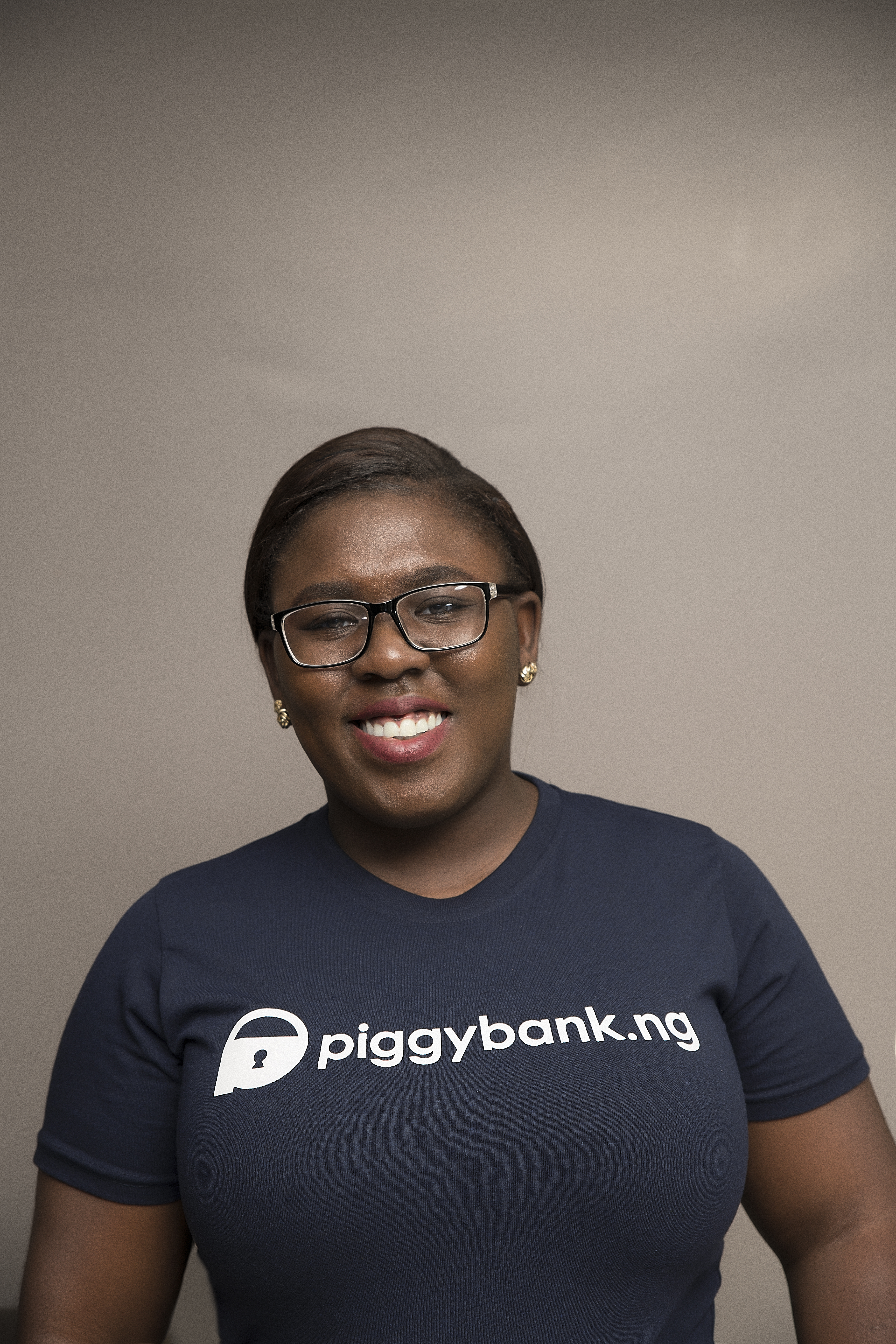 She graduated top of her Computer Engineering class in 2013 and, as is common with a lot of middle-class Nigerian families, her parents wanted her to get a Masters’ degree next. “I started applying to schools and I actually got accepted into two Ivy League universities, which was super cool,” said Odunayo, pushing her glasses up the bridge of her nose.

Two weeks after graduating from the university, Odunayo was on her way back from a job interview when her would-be co-founder, Somto, saw her through a window and called out to her. She had been contemplating the job she had just interviewed for (and gotten) so when she met up with Somto and found out they had a discount card startup called Parolz, she decided to join them instead.

Somto had been a pretty awesome engineer from their Covenant University’s days (Odunayo says he once built a miniature airplane that could fly in college) so she figured she didn’t have anything to lose. That event would fundamentally change Odunayo’s life.

Odunayo wasn’t a co-founder of Parolz but she was the company’s swiss army knife. She handled operations, social media and anything else that needed to be handled. “I’ll learn anything I need to learn as long as it moves the needle. That’s just how it is,” she told me, scratching her nose and pushing up her glasses again. “If I need to be X company’s COO, best believe I will learn everything I need to be that company’s COO. I don’t have a lot of life philosophies but one of them is to do your absolute best in ANYTHING you’re doing. Anything at all.”

While working at Parolz, Odunayo was also going to interviews with Bankole Oluwafemi and writing for Techcabal (yes, that happened) on the side. Meanwhile, Somto was building something called CV Flash to help people who couldn’t write CVs properly or did so with terrible English.

At some point, Somto needed help with the CV service he was building and Odunayo joined him to help write CVs for people – effectively becoming a co-founder. Soon, customers started asking them, not only to write CVs, but also to send them to employers as well. So they did just that. “That’s literally how PushCV was born,” she told Dotun Olowoporoku, back in February.

By March 2014, the team (including the other four members of the group) started to realise that the discount card business wasn’t working so they started to concentrate on PushCV instead. But Jobberman was already a thing and they needed to differentiate themselves. They figured: instead of just sending job applications to employers (like Jobberman), a great differentiator would be to screen the applicants first and send the best candidates to the employers thus becoming a platform for pre-screened job candidates rather than just, well, candidates.

By August 2014, they had formed a team and applied to Olumide Soyombo’s Leadpath Nigeria. He invited the team for a meeting and subsequently wrote a cheque for $25,000 – their first investment – and gave them an office space in Yaba, Lagos’ prominent startup hub.

By the end of 2015, PushCV was profitable and the team was already thinking of the next thing. It was great to help people get jobs but the team felt they could do more.

Then on the last day of 2015, someone shared pictures of her kolo, in which she had saved N1000 everyday in the calendar year, on Twitter. Immediately, one of Odunayo’s co-founders, Josh Chibueze started to look for a way to digitise this concept. They asked PushCV users how else they could help and saving salaries was the top choice. By mid-January 2016, version one of the Piggybank product was ready.

Being the unofficial devil’s advocate in the group, Odunayo kept the team honest as they fleshed out their ideas for Piggybank. “I’m usually the one that questions everything,” she said, laughing and stretching her legs. “I’m a self-professed pessimist,” another laugh, “but if you can assuage all my what of this, how about if this happens, then we are good to go.”

In no time, the team had beta-tested version 1 of Piggybank, shut it down, then Paystack launched and by April 2016, a fully launched Piggybank was available to the public.

Building Piggybank and still being actively involved in Sharphire’s other businesses (as part of a six-person team, no less) cannot be an easy job. According to Odunayo, grit is why she has been able to make it all happen. “It’s a combination of different things but if I was to sum it all up, grit is the word. When you know where you’re coming from and the understand the responsibility of your position, you just have to do what you need to do,” she said, stretching her legs in front of her and clutching her jacket a bit closer.

“I guess it also helps that we are a big team and everybody kinda has their specialties. When the work gets overwhelming for someone or we need to get something done for one of the businesses, we move resources around within ourselves to make it happen,” Odunayo said, responding to my question about the six of them making decisions, especially for a product like Piggybank that is deeply personal to its users. 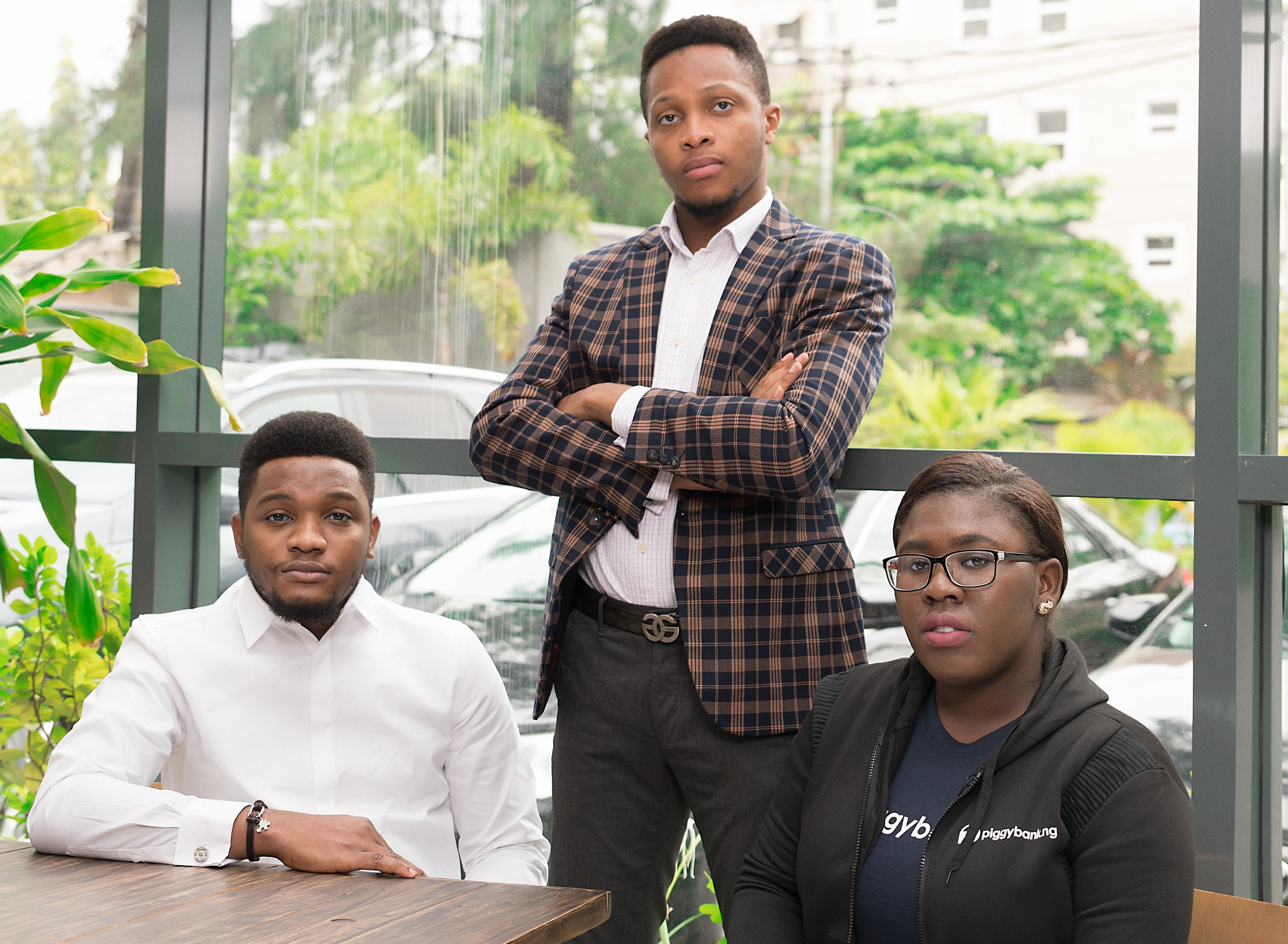 That’s also why only three people are publicly listed as Piggybank’s co-founders. Behind the scenes, the startup actually has six co-founders but for investors (and PR’s) sake, the team elected to have Odunayo, Josh and Somto as the brands’ public faces.

Building Piggybank has not been easy but by building the product off user-recommendations, Odunayo and her team have seemingly cracked personal savings culture in Nigeria. Piggybank itself has grown off word of mouth, for the most part, and that shows the psychological aspect of the product – users typically have an emotional connection with the product (myself included).

“I think about it often and sometimes, I can’t believe how much people champion Piggybank. It’s so personal to them that’s why we want to do as much as we can for our users,” said Odunayo.

Odunayo’s team have plans to launch a group savings feature on the Piggybank platform in the coming months as well as stepping up marketing spend. They also plan to remain as lean as possible – something that has been a part of the team’s strategy from day one – although it has also acquired a significant stake in a microfinance bank which should help it expand its offerings.

“You can’t just throw money at everything, you know. We have to use the funds diligently and pick up the pace,” said Odunayo, when I asked her why the Piggybank office is so small and minimalist. Fair enough. 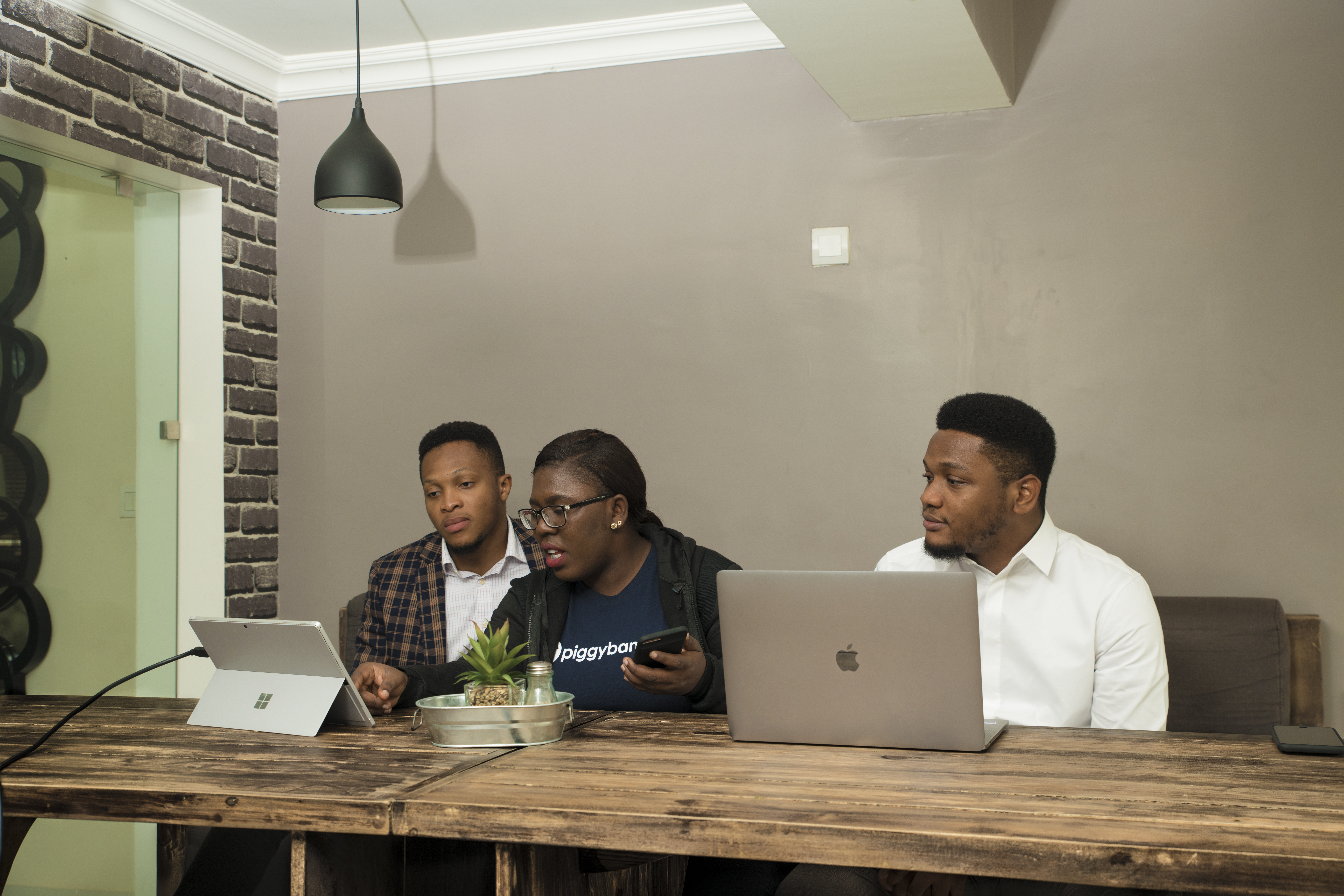 But ultimately, the plan is to build the company to a point where it doesn’t matter if any of the original founding members are running things or not. In Odunayo’s words: “Leaving a legacy [or having meaningful impact] is important. If I can get Piggybank to the point where it’s thriving with or without my involvement, then I’m good. That’s why we are all working as hard as we are – so that 5, 10, 15 years down the line we can look at how the company is changing lives and impacting the community and say to ourselves: ‘We did good.’ That’s what it’s all about.”

As is evident from her story, Odunayo is not your average Nigerian woman. She doesn’t consider herself “fashionable” (she’s a sneakerhead though) and she’s a homebody who would rather watch shows/movies and drink some wine instead of going out. She’s not particularly concerned about marriage and she mostly plans for the mid-term, albeit neurotically so.

Odunayo is also passionate about education, something I suspect she inculcated from her parents. “I plan to get into education at some point. It’s something I am very passionate about so that’s definitely going to happen,” she said with a giant grin. For now though, she is concentrating on Piggybank and turning the product into a millennial juggernaut.

“It’s very important to know where you’re going and [what you need to get there]. When you think about that and you think of the people that have expectations of you [like my parents, in my case], it becomes easy to do the work and keep pushing.”