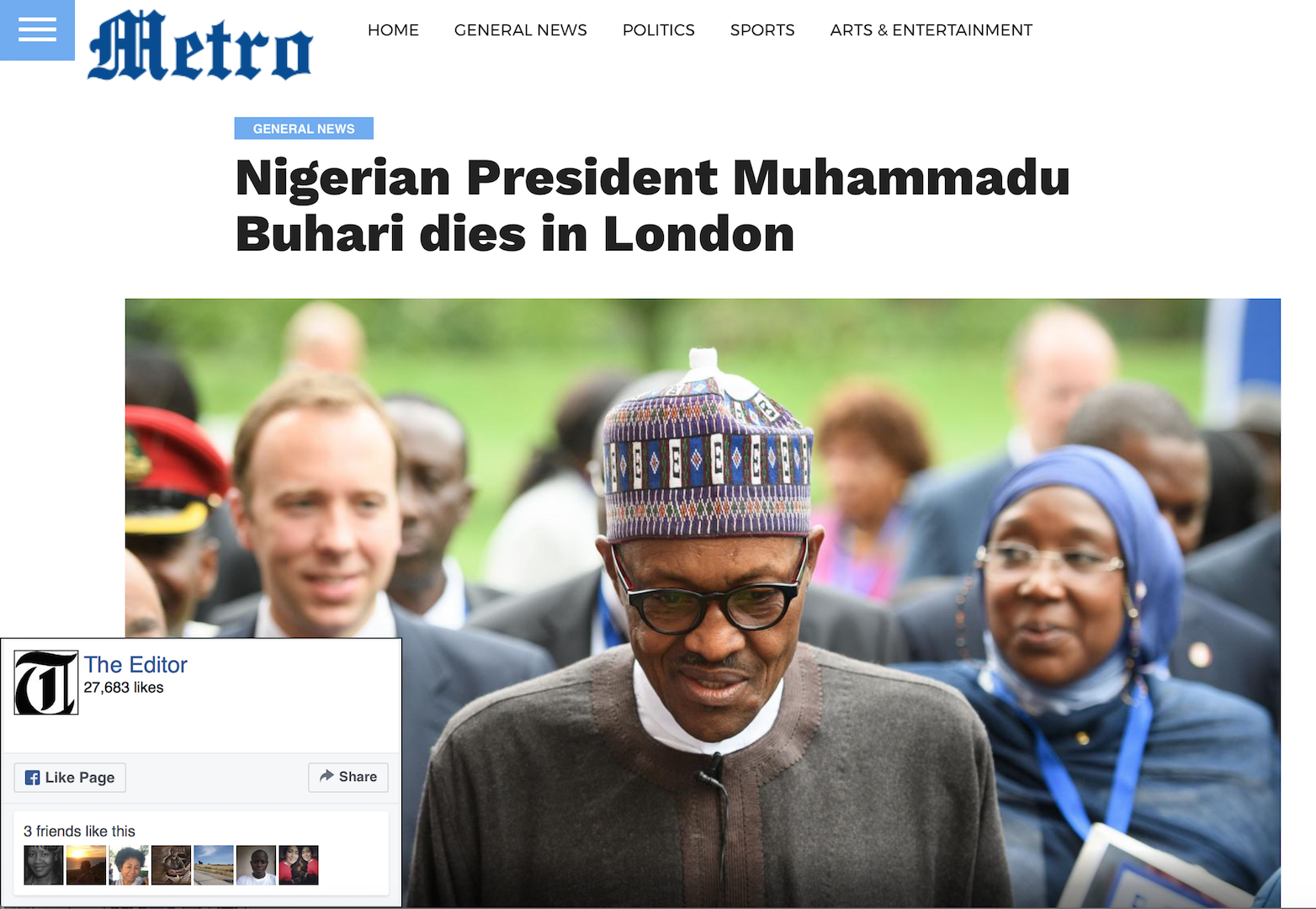 For some reason, Nigeria (and Nigerians) never seem to talk about or even acknowledge fake news, misinformation and propaganda spread through social media and other online platforms – even during election cycles when they are most prevalent. You hardly see it being discussed in social media forums, reported on TV or given huge headlines in newspapers. It’s almost like it doesn’t exist.

But this is a huge problem (and it’s not even unique to Nigeria). Across Africa, misinformation and fake news have become a growing menace. A report by Kenya-based Portland Communications found that “53 per cent of the leading voices on Twitter around ten elections on the continent during the past year came from outside the country in which the elections were contested.”

The report also found that “bots, and accounts displaying machine-like behaviour, were active across all elections, particularly in Kenya, where they accounted for a quarter of all influential accounts.”

From social media to less controllable platforms like WhatsApp and Facebook Messenger, the spread of fake news and misinformation with the aim of influencing elections is a very serious problem that Africa is not equipped to solve – yet we are not even talking about it.

The danger vis-a-vis the coming elections in Nigeria

In developed parts of the world where there is an active conversation about the dangers of fake news and misinformation, like Europe and North America, government and agencies (as well as companies) are still trying to find solutions with little success. Russian meddling in the 2016 US elections has been a popular example of how dangerous fake news can be.

There is also the much talked about Facebook – Cambridge Analytical scandal which revealed for the first time that the now defunct company was actively involved in influencing election in both Nigeria and Kenya. In India, at least 20 people have been lynched since April 2018 by angry mobs after child kidnapping rumors had been circulated through WhatsApp.

As Nigeria moves closer to the 2019 general elections, the danger of fake news is more apparent, now more than ever. Across the country, there are several incidents that could easily be manipulated using fake news and misinformation – especially as internet penetration continues to grow. From the herdsmen crisis in Northern and middle-belt Nigeria to the political instability surrounding the country’s ruling party and incidents of extreme incompetence, there is no doubt that Nigeria could be a propagandists’ wet dream.

These new methods of influencing public discourse could lead to riots, lop-sided polls, lynchings and all kinds of misrepresentation. For example, two days after news of the gruesome murder of over 86 people in 11 communities in Barkin Ladi, Riyom and Jos South local government areas of Plateau State on June 23, 2018 broke, another report claimed that the killings were retaliatory and credited the statement to Miyetti Allah Chairman Danladi Ciroma. However, after outrage across the nation over Ciroma’s statement, a new report revealed that Ciroma had actually been misquoted. Yet, there had already been reprisal killings in the North and East of the country.

For a country like Nigeria that doesn’t have measures in place to deal with these kinds of problems, it’s important that these conversations be had – and fast. Especially because there is a lot riding on the outcome of the 2019 elections (+ Nigerian politicians are known to play dirty).

What do the experts think?

According to this report, Gbenga Sesan, Executive Director at internet advocacy organisation, Paradigm Initiative Nigeria (PIN), fake news is not a new problem, even though the internet has made it an even bigger problem. That said, he did opine that fake news and propaganda was something that had to be approached collectively.

“For Ministries, Departments and Associations, understand the issue, understand that there must be a balance between privacy and security, get more people on the table to have this conversation, let various stakeholders give their input. You don’t just slam laws down on people’s throats,” he said.

“We don’t want fake news to affect the discussion & information dissemination as Nigeria moves closer to the 2019 Elections. Holding government & institutions accountable is important, but how do we ensure that the right to challenge ideas are not abused,” said Akua Gyekye, Public Policy Manager at Facebook, speaking at the Internet Freedom Forum 2018 in April.

“If you know a page that puts out fake news, please report it to Facebook. We have 24 million people active every month in Nigeria, it is impossible for us to monitor every conversation on Facebook. It is important for users to report fake accounts,” said Akua Gyekye, Public Policy Manager at Facebook at IFF2018.

People should be responsible for the kind of information they choose to spread. Fighting fake news is a futile effort if the people sharing these messages aren’t doing so responsibly or taking it upon themselves to fact-check before sharing.

Publishing houses also need to invest in capacity building and trainings for their journalists and provide them with tools that help them better fact-check and do the due diligence to make their stories as accurate as possible.

There are also independent verification and fact checking platforms like Dubawa, created by the Premium Times Centre for Investigative Journalism (PTCIJ) in partnership with PIN, that can help journalists and citizens alike fact-check stories and information before forwarding.

Platforms also need to put measures in place to make it harder to spread fake news. A great example is WhatsApp’s new “Forwarded” feature that shows you if a message was forwarded to you.

When it’s all said and done, there is no one way to put a definite stop to the conception and/or spread of fake news and false information. In fact, there may be no exact solution. However, if the relevant parties involved in the flow of information start to have these conversations across the board, then we may be able to figure an ideal way to solve kill this scourge and save our country from the consequences of fake news and misinformation.