Will Volkswagen Recoup its Investment in a Country with Little Mobility? 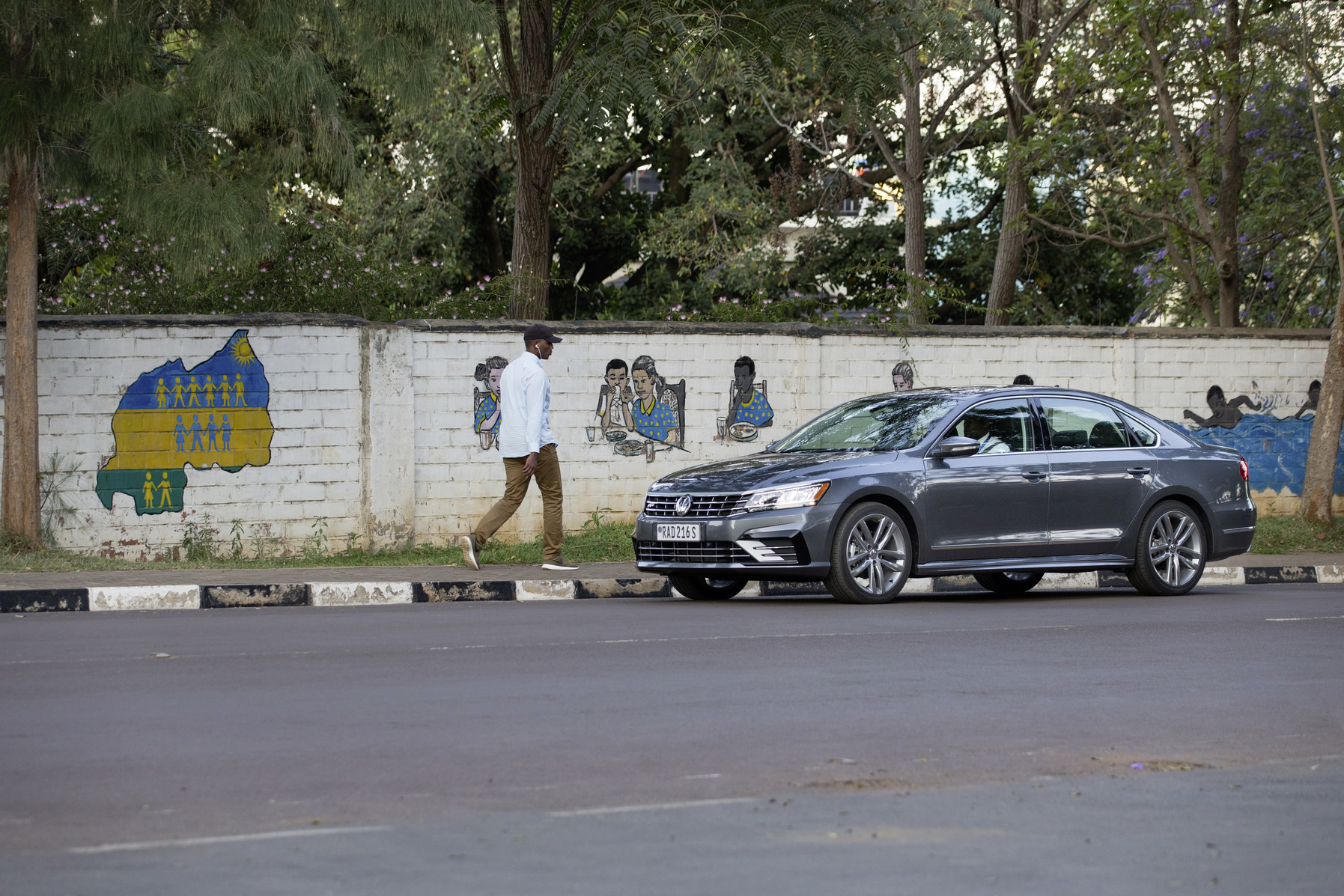 Volkswagen Passat on the streets of Kigal.

Rwanda seems like an unlikely place to launch a car assembly plant. Not many Rwandans own cars. Out of the country’s 12.5 million people (about 1.3 million living in the capital of Kigali), just over 200,000 private cars have been registered–although in an upward trajectory–since 1997. In Kigali, the sight of passengers strapped in green helmets on motorbikes is common, as are local cabs or intercity 54-seater buses, all means through which people get around in the country.

German car maker, Volkswagen (VW), taking a bet on this upward trajectory of car ownership, last year launched a US$20 million car assembly plant in Kigali, the capital of Rwanda in an expansion drive across Africa. Quickly after, VW also launched its robust mobility service, Move, with a new business model that has it controlling the entire value chain from providing its own cars to its own drivers. With its ride sharing and ride hailing services, and plans to launch other services–Move Kids for children commuting to and from school, and Move Drive, which will allow customers to rent cars for a period of time–VW seems to be banking on its mobility service, rather than its car sales, for profitability in the East African country.

An unaffordable assembly of cars

More than half of Rwanda’s population works as subsistence farmers and reside in rural parts of the country. Despite being heralded as one of Africa’s fastest growing economies, with a 2018 GDP per capita of US$788, 63% of the population still live on less than US$1.9 a day, and purchasing power is low.

“I can’t afford the new Volkswagen; it costs a fortune,” says an artist living in Kigali.

VW has plans to assemble 5,000 cars (of the Polo, Passat, Teramont, and Tiguan models) annually. But importing raw material from countries like South Africa and Kenya mean the costs of cars assembled in Rwanda are slightly higher than obtainable in some of its other markets. While the Rwandan-assembled VW Tiguans are expected to cost around US$37,719 (RWF32.4 million), prices start from US$22,860 (RWF 20.7 million) in the US following price slashes last year prices and US$31,279 (RWF 28.3 million) in South Africa. Findings from the Average Salary Survey says the annual average net salary in Rwanda is RWF 12.2 million. Hence, one will require two years worth of this net salary, untouched, to purchase VW’s most affordable car in its new plant, the VW Polo (RWF 20.5 million). Nonetheless, VW argues that in comparison with other competitors in the region, their prices are still affordable and the upward trajectory of car ownership will work in their favour. On the other hand, a government bent on supporting the growth of its local industry is a huge plus for the car maker, a luxury it hasn’t enjoyed in some of its other African markets. 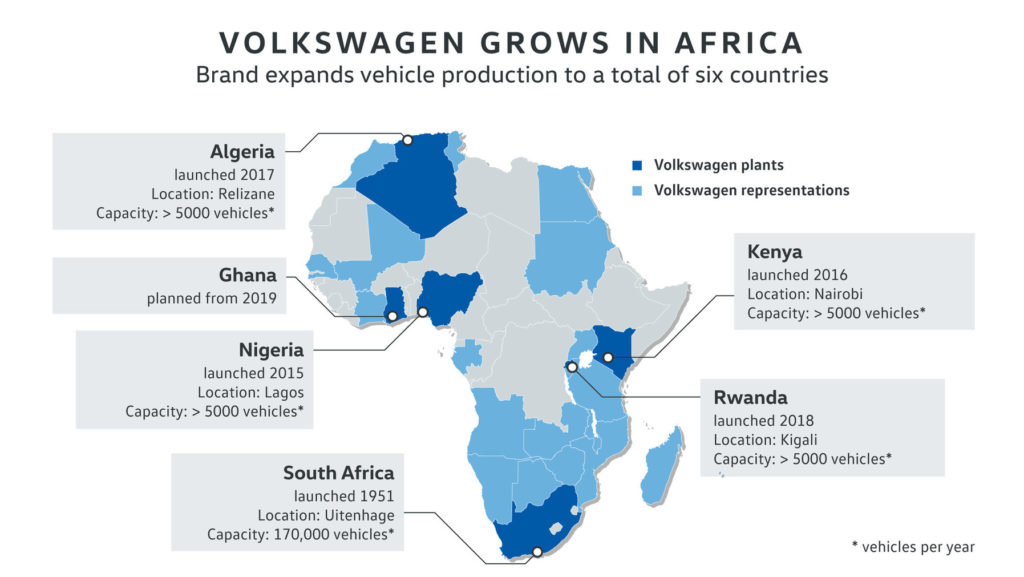 Volkswagen was one of two passenger automobiles operating in Nigeria from the 1970s as Volkswagen of Nigeria, the second being Peugeot. Both assembled cars from completely knocked down parts imported into the country from Europe. By the early 1980s, driven by an economic downturn courtesy a drop in crude oil prices, and unfavourable import policies and delays, production costs had skyrocketed and prices of vehicles increased. Despite the government’s launch of an automotive policy in 1993 to drive local assembly and less reliance on second-hand imports, the automobile industry was heavily reliant on second-hand imports and production volume had dropped drastically by the early 2000s. By 2005, VW had ground production to a halt only returning in 2015 when the government had begun making moves to institute a new automotive policy. In Kenya, VW resumed assembly in 2016, following a four-decade hiatus, after being stifled, again, by a market that was dominated by low-priced, second-hand imports. In Rwanda, however, the government has implemented the East African Community (EAC) Depreciation schedule, which increased taxes on second-hand car imports according to depreciation values. This has resulted in the decline of car imports since the price of used cars doubled.

While VW has said it is working on car mortgage packages that will help those in this new market afford their cars, it’s mobility service is proving more valuable, banking on the country’s increasing profile as a technology hub in Africa and its business-friendly environment. 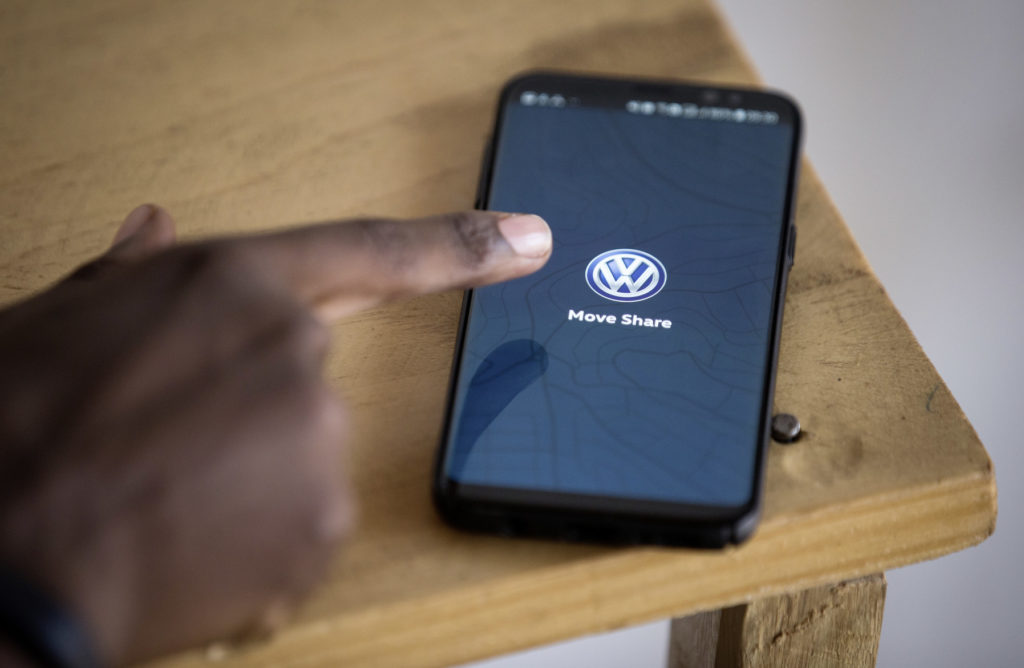 Last year at the launch of the plant, VW said 300 out of the 1,000 cars planned for assembly in the first year was dedicated to its mobility service, which first opened to Kigali-based companies as Move Share, giving businesses access to fully managed fleets of new VW vehicles. In March, Move Ride, its ride hailing option (featuring its Teramont, Passat and Polo models), was launched, allowing individuals to book taxi trips from a locally-built app. With over 10,000 downloads since launch, popularity is growing and highly appealing to Kigali’s young, tech-savvy population. Move fares are significantly cheaper than local taxis and also a much safer alternative to motorcycle taxis. There are plans to launch Move Drive, another service that lets individuals rent cars for a period of time and drop them off at designated parking points after use.

VW says demand for mobility is growing and its present offerings can scarcely keep pace with these needs. But Kigali is not without its own share of car and motorcycle ride hailing services. SafeMotos, a motorcycle taxi launched in 2015, says it has completed over 400,000 trips in the country’s capital and is now expanding into Kinshasa, the capital of the Democratic Republic of Congo. There’s also the presence of Yego Innovation’s YegoMoto and YegoCabs (although rides are ordered by calling a toll-free number and fares calculated via a meter). While no single service currently controls Rwanda’s ride hailing market at the moment, VW is positioning itself to assume that stance with its business model and pricing.

“The moment they meet the requirements, they will start operating,” says Emmanuel Asaba Katabarwa, the Head of Transport regulation department at the Rwanda Utilities Regulatory Authority.

Estonian ride hailing company, Taxify, which has trumped Uber in Nigeria, is also said to be eyeing the country. Kenya’s Little was also reportedly planning to launch in Rwanda in June 2018 around the time when VW launched its assembly plant but is yet to do so.