Factsheet: How to get your African movie on Netflix 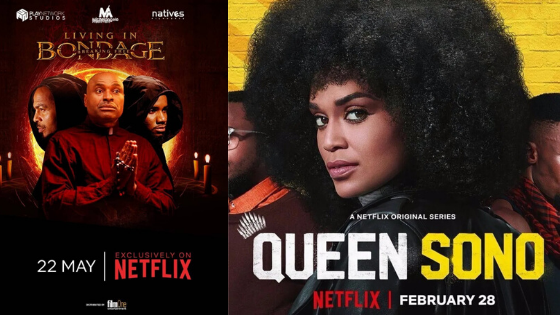 At a spacious car park within Abuja’s Transcorp Hilton premises, Charles Okpaleke, the producer of Living in Bondage: Breaking Free screened his movie on Wednesday night in the form of a drive-in cinema.

It was a creative, social-distancing-compliant use of open space and digital projection technology. It was also a celebratory exhibition: On Friday, Living in Bondage – Nollywood’s top grossing film of 2019 at about $435,000 – joined the growing stock of African films on Netflix.

There are now scores of African films and TV shows on the streaming video-on-demand platform. Between 5 and 10 titles are added every month and a lot of them are from Nollywood.

Apart from pirated DVDs, Netflix is currently one of a few streaming platforms where you can see hits like the Wedding Party projects and Kemi Adetiba’s King of Boys.

Physical restrictions caused by the coronavirus have put Nollywood on hold. As with production, movie releases in cinemas have been adversely affected.

The premiere and release of Toyin Abraham’s Fate of Alakada was postponed indefinitely in late March. Mama Drama, a film about infertility and surrogacy, had started showing in cinemas before lockdowns became necessary. But it will be re-released later in the year as there was little traction from the first release.

Meanwhile, if like Okpaleke, you have a movie on Netflix, you can… chill.

It’s a sign of the future of filmmaking and distribution. With Netflix’s new money-backed focus on African content, planning to get your movie on Netflix could become more than just a matter of bragging rights.

Genevieve Nnaji’s Lionheart made headlines in 2018 for its milestone as a pioneering Nigerian Netflix original. Queen Sono, Africa’s first Netflix original drama series created by an entirely South African cast and crew, had a good first season and has been renewed for a second.

However, their main short-term target is to increase licensed content. This is where the majority of producers can hope to reap some rewards. But what’s involved?

Netflix will not license just any African movie or TV show.

As a subscription-based service, the US company wants to flaunt a quality library. It may have led the way in SVOD a decade ago but Amazon, Apple and Disney are now gunning for its cake. Each has a massive budget and is plotting a formidable catalogue of movies.

Netflix competes on quantity but also quality. In that sense, African movies have to meet technical specifications on picture and sound in addition to scripting and acting.

International festivals are a good route to getting an African movie on Netflix. But the bar for quality storytelling is high, says Ema Edosio whose 2018 film Kasala is currently on Netflix. “You should be ready to tell local stories that are relatable to an international audience,” she says to TechCabal.

After a very short run in Nigerian cinemas, a producer at a Paris festival recommended her film to Netflix. It’s a similar route to Abba Makama’s Green White Green (2016), which didn’t get viewed in cinemas but will be available on Netflix thanks to strong showing at global film festivals.

Specifications vary for original and licensed content. Predictably, the bar is higher for original content but there is a dedicated 50-page document on what already-released films must have to be Netflix-worthy.

Netflix won’t simply take your movie because it is wisely scripted, passionately acted, and/or perfectly produced.

In fact, the cash-burning company has no incentive to license titles that don’t have organic traction. In paying for these African films, Netflix wants to showcase a diverse catalogue and make money from existing and new subscriptions.

Netflix reportedly pays from $5,000 to as much as $70,000 per licensed African film, and they expect return on investment. You don’t become part of the FAANG – the catchy designation for the world’s top tech companies  – by running a charity.

Therefore, movie producers still have to do the heavy lifting of enlisting distributors who have the industry range to give the film a reputation.

Traction is becoming important as the period between a movie’s cinema release and Netflix availability shrinks.

For example, King of Boys, Stephian Zwane’s Baby Mamas and Tope Oshin’s Up North were released between October and December 2018; they took 10 – 16 months to appear on Netflix.

But Zuko Nodada’s Uncovered (2019) and the Living in Bondage sequel have made the transition in about seven months.

In any case, the span of a cinema run has always depended on the interest of the multiplex owners. One in particular is playing a leading role in the emerging Nollywood-to-Netflix era.

It makes FilmOne, their production and distribution arm, a major ascriber of value in the West African film value chain.

Netflix does not accept unsolicited submissions. You have to go through agents, producers or industry executives with which they are familiar. As one of a select group of agents and aggregators in Africa, FilmOne handles the legal, technical, finance, operations, and marketing aspects of an African movie’s journey to Netflix.

“FilmOne doesn’t decide on the movie,” Ife Idowu says to TechCabal. “The platform decides, Netflix or any platform we deal with.”

Idowu leads the licensing and contracts team at FilmOne. He says they have a system for sifting through films “irrespective of the producer” and presenting to buyers, be it Netflix or Amazon’s Prime Video.

FilmOne has so far distributed 55 Nollywood films to Netflix. They include the biggest titles in the industry like the Wedding Party films which FilmOne co-produced with three other studios.

About 24 Netflix-ready licenses are in the works according to Idowu. He cites FilmOne’s “structure, efficiency, knowledge and professionalism” as their advantage over other aggregators.

Aim for Originals? Why not

FilmOne is not involved in the Netflix Originals space, yet.

Netflix has a department of acquisitions for Africa and the Middle East. The business is mediated by acquisitions executives like Funa Maduka, who handled the discovery and licensing for Lionheart, according to two people familiar with the industry.

Not everyone will eventually make an African Netflix Original. It is probably realistic to shoot for a decent movie that uses Netflix as the crowning glory for a cinema run. DVDs are still a thing too, though goodluck dealing with Alaba international, the electronics market in Lagos that has become the melting pot for piracy.

All considered, the pecuniary reward for agreeing to license your already-produced films is probably not impressive for a big budget movie.

But Netflix – and the other platforms that will eventually increase their presence in Africa – have superior global reach. It only makes sense that an ambitious producer should reach for those additional eyeballs.