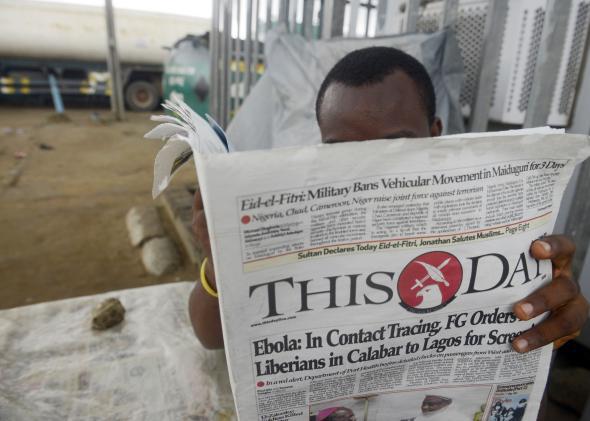 Over the last few months, the struggles of news media businesses have become quite glaring. The COVID-19 pandemic has affected the global economy, enough to force businesses to cut down on advertising; the major lifeline for news media. The world’s biggest media publications have not been spared.

In May, US publication, The Atlantic laid off 68 employees and shuttered its video unit.

Before the layoffs, The Atlantic looked like the model digital media company. It re-introduced a subscription model in 2019, quickly growing to 160,000 paying subscribers by May 2020. The 163-year-old publication witnessed supersonic growth after the outbreak of the pandemic, adding over 90,000 subscribers. But this wasn’t enough to shore up revenue.

Other publications have also been forced to cut jobs. Vice cut 155 jobs; 80 cuts at Quartz; 90 at the Economist; and 100 at Conde Nast.

Across Africa, media companies are facing this reality. According to a report by Media Foundation for West Africa, print publishers in a number of countries are “beginning to fade out due to their inability to generate enough revenue.” This trend is now trickling to the Nigerian media industry.

Traditional media is the biggest casualty as readers migrate online and this is the most devastating challenge for the Nigerian media industry in recent memory.

News readers have an old practice of going to read and debate news at newsstands without actually buying any of the newspapers. Caused by the low-income of many, this trend has affected print revenue for years.

Now, a number of print publications have slashed the number of pages on their newspapers.

Punch Newspapers, one of Nigeria’s biggest publications, has reduced pages from 62 to 32. Punch says it will focus more on its online arm and has temporarily shut down its sports newsroom.

Other publishers like The Nation, Tribune Newspapers, Business Day and the New Telegraph now have 32 pages, down from 46-65 pages, according to Nairametrics.

Many news publications are cutting jobs and slashing staff salaries to stay afloat.

“Considering the fact on the ground and the body movement of the board, full salaries may not be paid in May and some people, especially in the newsroom, would be forced to resign,” Punch’s management wrote in a memo to staff.

Publishers such as The Nation, Sun Newspaper, Daily Trust, The Guardian and Big Cabal Media (owner of TechCabal) have slashed salaries by 50%.

“Covid-19 cuts in the very DNA of the traditional business model that sustains the media; advertising, circulation and events,” Dapo Olorunyomi, CEO of Premium Times, told Media Foundation for Africa.

“Many advertisers have not returned and may be difficult to win back in short to medium terms, already 21 media organisations have sent out messages of massive staff downsizing and salary cut.”

These sweeping changes are a new threat to Nigeria’s peculiar media environment. Before now, job cuts and furloughs were rare. Even though many publications have struggled with revenue for years. Yet rather than trim their newsroom, some simply choose not to pay salaries for extended periods of time.

This worrying behaviour has always affected the quality of journalism produced in the country. Underpaid reporters pass off sponsored articles as actual news reports.

In May, popular publications like Leadership, ThisDay and Vanguard reportedly owed salaries for at least 3 months.

This appears to be a sort of antifragility tactic designed to keep operations running for a longer period. Yet without their salaries, workers have zero motivation to work. Although this beats the alternative: getting unemployed in a country where jobs are scarce.

As print media becomes more expensive to operate, news publications are switching to the internet. Fortunately, online news consumption is high thanks to the pandemic and virus control measures. Internet service providers say data subscription has spiked as more people stay at home.

By recently increasing their digital footprints, news publications are competing for an even smaller online revenue stream. Google and Facebook dominate the online advertising business. Nigerian news media, like other countries, have no leverage capable of getting these platforms to fork out a greater part of their revenue.

Meanwhile, since the outbreak of the pandemic, businesses have slashed advertising budgets, while optimising what’s left. To maximise their budgets, businesses are doubling down on niche marketing, choosing to spend money marketing at places where their market audience actually are (social media).

Unfortunately, most Nigerian news publications are generalists, even on the internet. Their niche segments such as newsletters, video, political illustrations, games, art, sports, fashion and fashion are all underdeveloped. A few publishers like the Nigerian Guardian offer niche lifestyle magazines on weekends, but they have less visibility online. This reduces their reach and chances of developing paying readership online.

Meanwhile, for their future growth, Nigerian news media companies may need to develop their niche offerings and also create deeper connections with their online audiences. The 2020 edition of the Reuters Institute of Digital News Report [PDF] suggests this is the route to follow.

“Looking to the future, publishers are increasingly recognising  that long-term survival is likely to involve stronger and deeper connection with audiences online,” the report said. “Faced with the growing power of [social media] platforms, publishers have been working hard to build direct connections with consumers via email, mobile alerts, and podcasts.”

“News is really important, but that is not what people pay for,” said Tomiwa Aladekomo, CEO of Big Cabal Media. Also, “the bar for reading news is very low,” he added. “[But] people pay to join a tribe.”

Aladekomo explains that people are more likely to pay for publications like the Financial Times and the New York Times because they serve as an important primary news source, and because they have become an essential part of the way readers identify themselves and view the world. Additionally, the way these publications make money has also changed. On top of the news and content they offer, these publications have built adjacent services that people want to enjoy

In the US, online news publications like the New York Times have built a large subscriber base around digital-crossword puzzles. The paid-to-play game costs $6.95 per month and $39.95 a year. In March 2020, the Times had 600,000 crossword puzzle subscribers.

The Information, a US publication, has grown to over 30,000 paying subscribers providing them with exclusive reports about the tech industry. The Atlantic, another foreign publication maximised the coverage on the pandemic, growing both its web traffic and paid-subscriber base.

In Nigeria, very few news publications attempted to build a niche audience and subscription products before the pandemic. Business Day runs a paid-digital news subscription service. In addition to print subscription, the digital option now makes up 45% of the publication’s revenue.

“As long as the digital platform itself is not making enough money for it to be classified as a bona fide company on its own, then you are not likely to see all of those changes,” said Lolade Nwanze, former head of digital at The Guardian Newspaper.

“Because as long as it is being funded by another business, it is always going to be approached the way it has been approached, it would be treated as an addon.”

But without a strong niche audience, advertisers feel like they are getting less value for money. They are focusing on the next best option: influencers.

In the West African country, influencers command a significant and growing stake advertising budgets. A popular Twitter influencer could command the same amount it would cost to advertise on the centerspread for most print publications, with a caveat of actual engagement.

Niche influencers can generate even more revenue. They provide better value for advertisers and their posts most times reach the right consumers.

Without an engaged niche audience, news media could fast lose out on this revenue to influencers.

Meanwhile, according to a 2016 survey sponsored by Luminate, online news is low-trust among Nigerian readers. Only 42% of respondents said they had “trust retention” for online news; this means more people are likely to lose faith in an online source they may have previously trusted.

The competition for eyeballs over the coming months will be intense. Trust in the media will be tested. At the expense of quality reports, publications will want to attract more readers and hope to shore up their revenue base. But will they do so at the expense of quality reporting? Or will they resort to be content farms, churning out hundreds of articles that inspire clicks?

To mitigate this negative trend, bailout and new funding for media publishers are needed urgently.

Publications like Premium Times and The Cable have received grants over the last few years. This funding has allowed them to continue impressive investigative journalism. Yet both publications and their reporters continue to face serious challenges and pressure from the government and many interest groups over the reports they publish. However, the financial independence of these publications reduces their exposure to interference.

Unfortunately, many Nigerian publications do not have access to this level of funding. After maxing out their current revenue streams, many publications will seek funding from alternative sources.

But according to Lolade Nwanze, there is a risk that bailout from the wrong sources could kill the independent media, and by extension, misinformation could increase.

“We’ve not seen fake news,” she said. “If formal media collapses, it’s going to implode from the inside.”

“It won’t collapse in the sense that everything will fall apart. Rather what’s going to happen is that the big guns, the money bags could take over. And that essentially is death to journalism. They will determine what stories get reported, [and] essentially they become their propaganda machines. There would be nobody to fact check anything.”

The Nigerian government has set up a relief fund for businesses and households since the outbreak of the virus. Media industry bodies including the Broadcasting Organisations of Nigeria (BON) and the Newspaper Proprietors Association of Nigeria (NPAN), have called on the government to assist with bailout fund for the industry. At a virtual meeting on June 17, the Minister of Information and Culture, Lai Mohammed promised to help secure a ₦10 billion Media Intervention Fund from the country’s Central Bank.

In the meantime, Aladekomo says the “changes that media businesses need to make are fundamental, difficult and tough. It’s not a surprise that many publications are not up to the challenge of making those changes.”