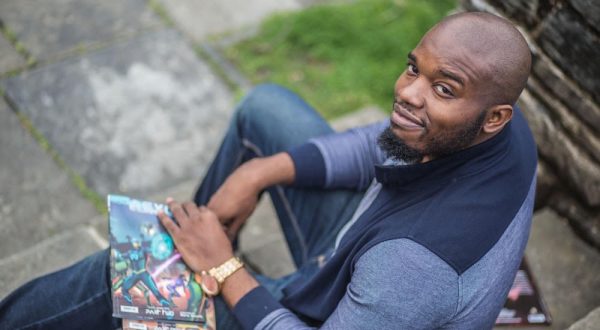 While many kids dreamed of becoming superheroes like Spider-Man or Wonder Woman, Roy Okupe dreamed of creating an African superhero universe.

Last week, Okupe moved a step closer to achieving his dreams as Dark Horse Comics, the publisher behind the likes of Hellboy and The Umbrella Academy, announced that it had acquired the rights to publish YouNeek Studios’ (Okupe’s company) library in an unprecedented deal.

This is the first time Dark Horse Comics has ever distributed an entire library of African superheroes.

YouNeek Studios also recently secured VC investment from Impact X Capital to develop animation series based on a world of superhero and fantasy stories inspired by African history and mythology.

Raised in Lagos, Nigeria, Okupe emigrated to the United States at the age of 17.

After graduating from George Washington University with a degree in computer science (while also studying animation at the Art Institute of Washington), he kept an eye out for African superheroes. When he discovered there weren’t many, he decided to create them.

Recalling this experience, he says, “Initially, I wanted a publisher to validate that I could tell my own stories the way I wanted. But I pitched some of my stories to different publishers, and everyone told me no. So I was forced to self-publish, which I think was the best thing for me.”

He learnt everything about the publishing industry from scratch.

“I had to learn how to do everything. What exactly is the comic book industry? How do I write compelling comics? How do I create characters? I was the writer, the editor, marketing, and publicity.”

“Plus, making deals with distributors and negotiating the best print prices, and proofreading everything. The only thing I didn’t do for YouNeek was drawing the comics. Which, looking back now, it’s just insane. I don’t know where I got the energy. But again, it’s the love for the industry.”

“That experience has become an asset for me. Now, when I’m talking with Dark Horse, there’s nothing they can tell me that I don’t already understand. And they appreciate that because I make their job easier.”

It’s worth noting that when finalizing his deal with Dark Horse he maintained the rights to his works. So he can negotiate his own deals for adaptations in television, movies, animation or streaming.

For Okupe, the Dark Horse collaboration comes as validation after years of freelancing as a web developer while quietly building YouNeek studios.

Over the years, he’s run 10 successful Kickstarter crowdfunding campaigns starting with E.X.O. The Legend of Wale Williams in 2015. He even created an animated short around Malika, his first woman-led title.

All of YouNeek’s titles are inspired by the beauty and mythology of West Africa.  These titles also digitally distributed.

The negotiation for this deal with Dark Horse took about two weeks last year. But Okupe had met with the company in 2019 when a rep from Dark Horse reached out. Somebody had given them a copy of Malika and they loved it.

Then at New York Comic Con again in 2019, he pitched the entire YouNeek universe to the editor-in-chief, Dave Marshall, in person.

Mike Richardson, CEO of Dark Horse has described this deal by saying “YouNeek Studios is unlike anything in American comics today,”

“I hope to see the YouNeek acquisition prove to comics that there is absolutely a market for these stories, told by creative teams that have the knowledge to tell them right, and I see more publishers picking up books like these in the future.”

Okupe believes that the immediate impact of the partnership with Dark Horse is that it will bring more attention to YouNeek Studios and the African continent. “It’s also going to shine a light on the African continent and what it has to offer when it comes to the entertainment industry, specifically comic books.” He says.