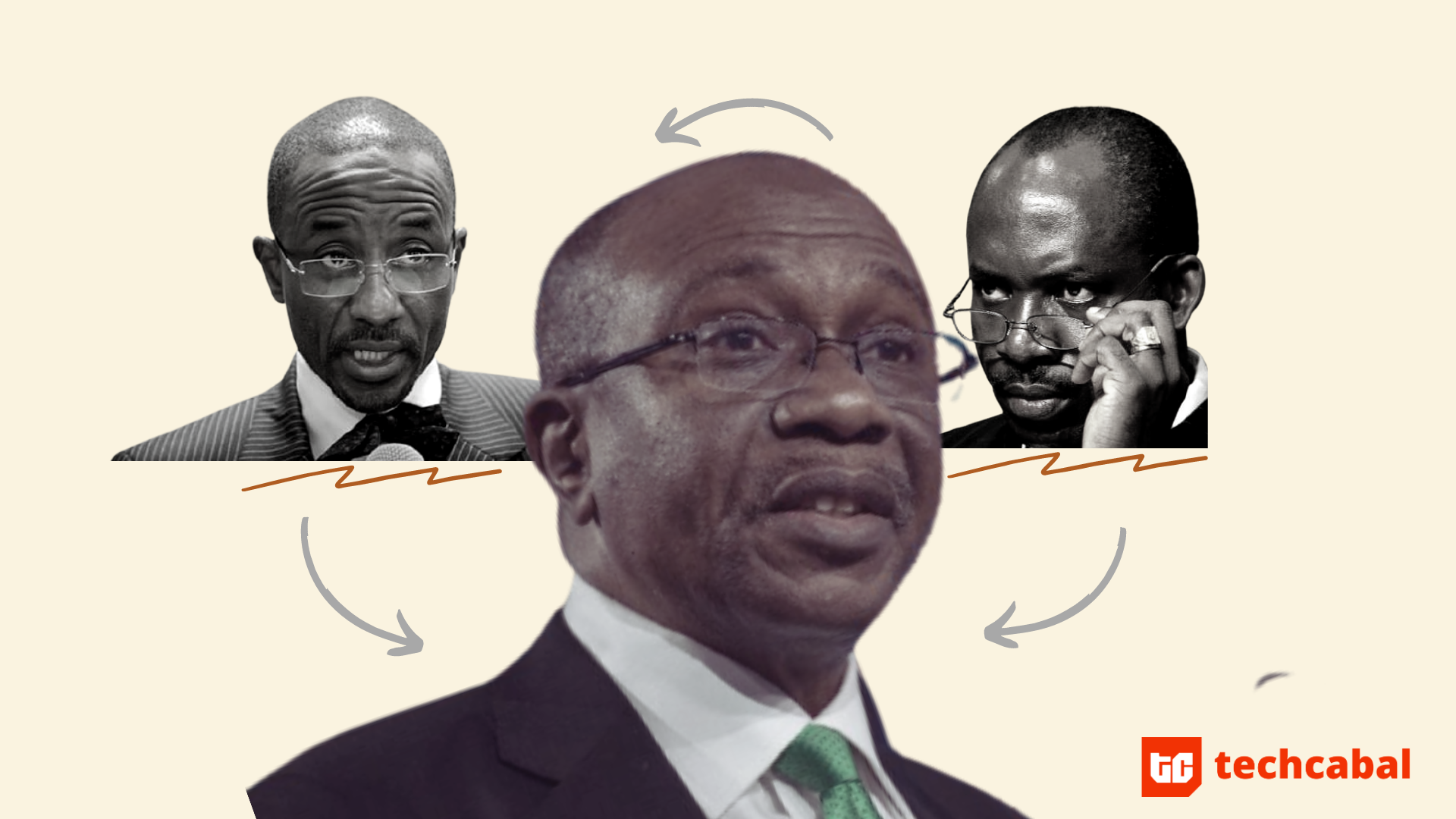 Godwin Emefiele keeping to the tradition of his forbears; Sanusi to his right, Soludo left.

Godwin Emefiele did not mince words. First Bank’s leaders crossed the line and were made to pay, without hurting the bank’s minority shareholders and 31 million customers. Too big to fail does not mean too big to be flogged.

Emefiele delivered the hammer in twenty minutes. Not via tweet or a memo (those are for fintechs) but on live television.

In his role as Governor of the Central Bank of Nigeria, Emefiele gets a lot of flak.

His off-the-cuff justifications of money printing give him away as a partisan bureaucrat leading a body that should be politically independent. He’s been accused of turning the CBN into a distracted (and dictatorial) jack of all trades. What he said about cryptocurrency – “it is created out of thin air” – continues to confound.

But on Thursday Night Live, Emefiele earned his April salary with his scripted performance. He added another example to a developing tradition of CBN Governors taking the nuclear option against leadership at Nigerian banks, when foul play morphs into potentially explosive rots.

Oceanic, Intercontinental and the Class of 2009

If we go back only 12 years, there was the sack of MD/CEOs and executive directors of five banks on one August evening. Governor Sanusi Lamido Sanusi was the executioner.

The CEOs’ offence? ₦1.1 trillion in bad loans, at least.

Union Bank is the only surviving member of that infamous Class of 2009. Afribank, Finbank, Intercontinental Bank and Oceanic Bank are now footnotes in banking and finance textbooks.

Like Emefiele, Governor Sanusi invited journalists for the momentous dethronement. While Emefiele reinstated the hastily-retired Adesola Adeduntan to the First Bank CEO-ship, Sanusi hired five new leaders to replace the CEOs he fired.

Sanusi was flanked at his Lagos press conference by his CBN deputies. Emefiele was a lone hitman in Abuja, perhaps due to COVID-19 restrictions.

Can a CBN Governor really fire bank MDs? A court decided this in 2010 when an ousted Wema Bank boss (who tried to retake his office with the help of armed policemen) sued Chukwuma Soludo, the CBN Governor before Sanusi. Jeremiah Omoyeni, the MD in question, argued that firing him was “not in the best interest of the public.”

The Federal High Court in Abuja dismissed Omoyeni by relying on Sections 32 and 33 of the Banks and Other Financial Institutions Act (BOFIA) 1991 as amended. The revised BOFIA of 2020 further empowers the CBN to take such actions, including against entire board members whether they be kings or princes.

No wonder Emefiele was decisive on Thursday, donning his typical green tie with patriotic pride. But this wasn’t his first time executing this aspect of his powers.

This Skye is the limit

Emefiele announced the dismissal himself, citing Skye Bank’s inability to meet requirements for capital adequacy ratio (CAR) – a measure of how much capital banks have to protect customers’ deposits. Skye Bank is now the significantly less popular but stable Polaris Bank.

Which brings us back to First Bank, established in 1894 and one of Nigeria’s top five banks by metrics that matter; assets, deposits, customer base, revenue, credit and branch footprint. It is “systemically important” to Nigeria’s financial system but is it significantly in good shape?

In his Thursday address, Emefiele admitted something; banks don’t really have to call the CBN in before choosing their leaders. Here are his words:

“Ordinarily, the board of a bank is vested with the authority to make changes in the management team subject to the Central Bank of Nigeria’s approval. After such changes, the board applies to the CBN for approval and no-objection.”

“However…” and this is the catch; the above applies to banks that are in a regular state of health. First Bank, as Emefiele explained and financial reports show, has been sickly and under close watch since 2016.

“…the CBN considers itself a key stakeholder in management changes involving First Bank of Nigeria due to the forbearances and close monitoring by the bank over the last five years, aimed at stemming the slide [and] growing concern [over] the status of First Bank.”

And so when First Bank removed and replaced a CEO within a week, it inevitably raised eyebrows.

Banks typically announce such seismic moves months ahead, followed by a detailed dance of succession engagements.

To flip the executive switch in days is dodgy enough; doing it while under intensive care and without the resident doctor’s say-so? Juvenile.

Thursday’s events give the impression that the CBN is committed to enforcing the code of corporate governance revised for banks in 2017:

“We have the Code of Corporate Governance and Code for Bank Directors. You sign these codes before you become a director.”

“It is part of the employment terms. One of the things in these codes is that if you are having a non-performing loan, it is a ground to remove you from being a director.”

We now know that Oba Otudeko, Chairman of First Bank of Nigeria Holdings, has a bad bill of insider loans to clear. But it is possible that the CBN would not have punished him or any director this week.

Towards the end of his press conference, Emefiele said he repeatedly called Otudeko on the phone, asking him not to remove Adeduntan (whose first five-year tenure as CEO expires December 31, 2021) without the CBN’s involvement. Otudeko did not budge, convincing the board to proceed.

As such, this week’s sensational dismissal is partly the result of a clash of personalities. It is not fully a strict adherence to sacred statutes or non-negotiable tradition. By his own admission, Emefiele took action because a regulatory line was crossed but also because he was crossed.

But he took action. For a day, his office took itself seriously and fulfilled a responsibility in the public interest.