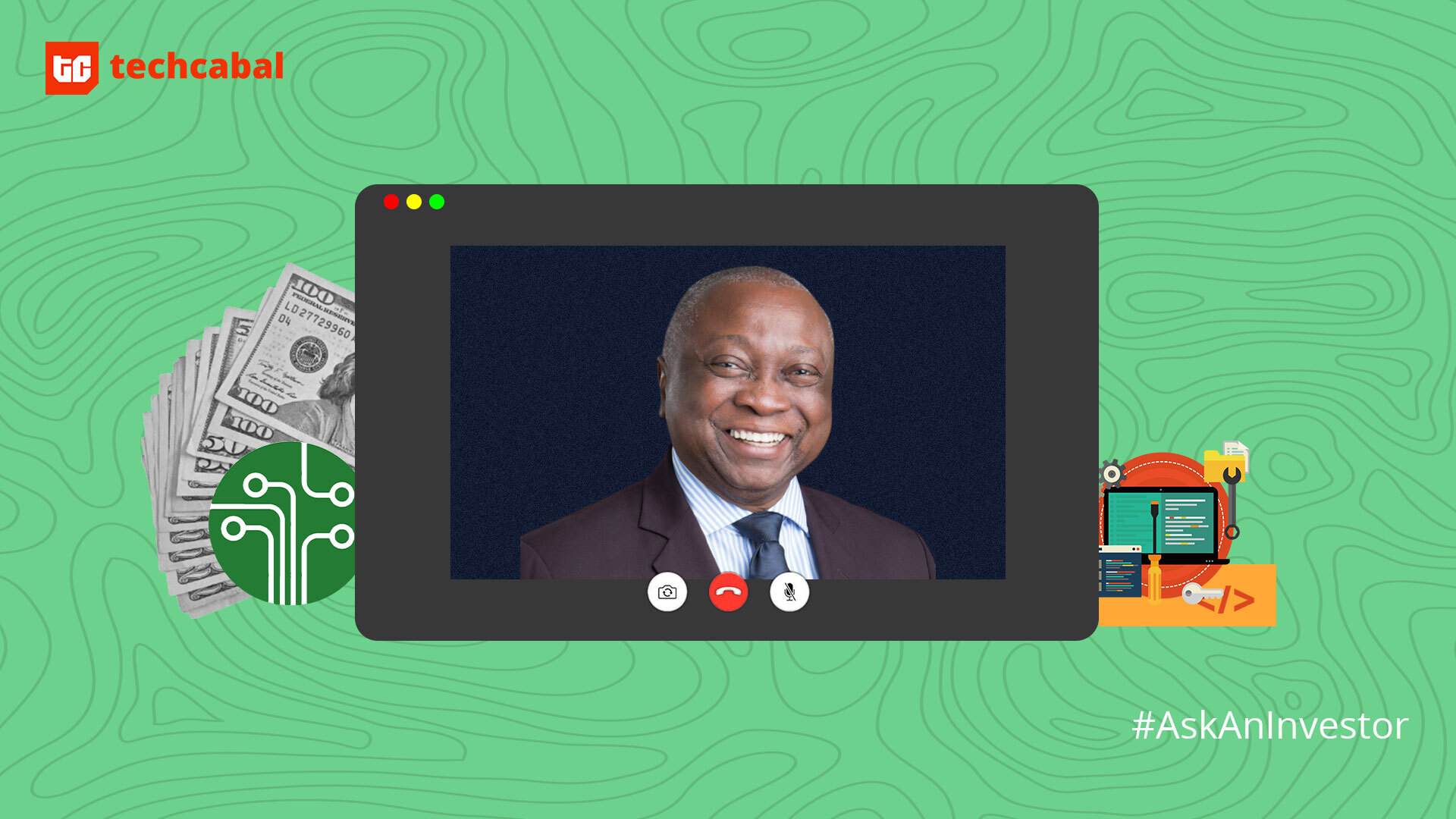 In 2001, Tomi Davies backed his first company — Strika Entertainment. At the time, he didn’t have a name for what he was doing; he was just helping friends.

He’d later learn that what he was doing was called angel investing — an individual providing financial backing for small startups or entrepreneurs, typically in exchange for equity in the company.

Twenty years after his first investment, TD, as he is fondly called, has gone on to make many more investments and build the angel investment space in Africa.

“The problem I’m still trying to solve is that of funding for every African entrepreneur’s great idea.”

We start out our conversation talking about his first investment in Supa Strikas, a popular comic I grew up reading.

Daniel Adeyemi: How did the investment in Supa Strikas happen?

TD: It started with meeting a South African named Oliver Power, I was head of IT research at Marks and Spencer in the UK then. A few years later when we returned back to our countries, he and a few others approached me to tell me that they had come up with an idea to do a comic.

It was a superhero comic book that featured the likes of Shaka the Zulu, Mansa Musa and Alaafin of Oyo.

It sounded like a good idea but I had to ask them, ‘How are we going to make money?’ because we needed to raise some investment. They said we’re going to use a different model, we’re going to get sponsorship from brands. We’ll be like Marvel comics.

So I went to Cape Town, we had lengthy conversations and concluded this idea won’t sell. We pivoted to a soccer storyline. Africans love football. We created an all African football team called Supa Strikas. It turned out to be successful.

DA: Why Angel and not Venture Capital?

DA: How do you operate?

TD:  My primary organisation is Technovision Communications. It operates as TVC Labs, which is funded by the 22 partners of the Technovision syndicate. These partners include people like Iyin Aboyeji, Kola Aina and Olumide Soyombo.

TVC Labs runs accelerator programs that identify different startups that we work with. Now my portfolio consists of about 18 active startups like Trove, BigCabal Media*, Flexiserve, Trueflutter, Kishi, doci healthcare and others.

DA: What was the reason for founding the Lagos Angel network?

TD: The Lagos Angel Network was a happenstance. In 2012, I was already involved in angel investing. I had recognised that this was what I was going to do for the rest of my life.

I ran into Dotun Sulieman; Funke Opeke of MainOne, Fatunmata Coker,  Demola Aladekomo of Chams, Gbenga Sesan of Paradigm initiative, Gbolahan Elias, Folabi Esan and a host of others. We decided to put some structure to this and we started the Lagos Angel Network.  We began structured investing

TD: After a while, there were about 5 angel networks on the African continent.

We started partnering with my friend Ben White who runs VC for Africa and we ran the African Early Stage Investment Summit. Eric Osiakwan ran Angel Fair Africa. Through these events, the Europeans heard about us and they invited us to Slush.

So we all went to Helsinki in 2015 for Slush. At Slush, they said we needed an African Angel network to create networks and to educate people on what angel investing is all about.

My big sister Candace Johnson just turned around and said to me ‘you’re going to be the President.’ I looked around, I didn’t know they had all agreed to this. I looked at Dotun Suleiman, he was my senior at King’s college and we formed the Lagos Angel Network together. He was the person I was expecting to be president but he said this is all yours.

So as president of ABAN, I spent the next 5 years crossing Africa and building networks. We now have 50 angel networks around 33 African countries.

It’s important at this stage to point out that at ABAN I have co-founders. They are Ben White, Rebecca Enonchong, David van Dijk, Alexandra Fraser and Christopher Campbell.

I’d like to give a special shout out to David van Dijk. He is the backbone of ABAN.  He runs the foundation, ensuring everything is running smoothly.

DA: What does it mean to be a part of ABAN and what has been the network’s impact?

TD: The future of Africa is being built by a generation of entrepreneurs that are using technology to provide innovative solutions to the people of this continent.

And those who support that cause will have a return not just in social impact but also in financial returns. That’s the fundamental belief of ABAN.

As a member of the network, what you’re signing up for is that we’ll provide human and financial support to those working on these solutions.

As for Impact, Let me just paint a picture. In 2015 there were 5 angel networks on the African continent. Let’s assume that they had 10-20 members each, so that’s 50 – 100 members in total. In 2021, there are now 49 angel networks in 33 African countries and Even if they have an average of 10 members each, that’s 490 members. That’s more human and financial support.

We created the Diaspora Angel Network, to co-invest in the local angel networks. So if you’re sitting in London and you want to invest, you can invest through these networks.

TD: That’s a tough one. Adoption rates are low because it’s not for the faint-hearted and requires patience. Most importantly, it requires a passion and dedication to the entrepreneurs themselves. If you do not have that love of seeing others succeed, then there are different ways to spend your time or money.

DA: What do you look out for when investing in startups?

TD: The way I pick startups is called the POEM Framework. It goes way back to when I left Marks & Spencer. I joined Ernst & Young, where I was the chief operating officer for its incubator program. The way we worked was by doing a lot of research, then experimenting and using the results to improve on the experiment. In today’s thinking, that’s best captured by Eric Reis in what he calls the lean startup product development methodology.

Over the past 10 years, I’ve interacted with entrepreneurs all over Africa and refined the POEM model. So it’s essentially vision, proposition, organisation, economics and milestones.  If you take those, what you want to understand around the vision when you meet the founder is, ‘Is the founder capable? What drives them?’

The second one is how significant the problem they’re tackling is. What’s the problem? How many people are bothered by this? Because you’re thinking about economic value.

Finally, you ask, is the solution innovative? Is the offer compelling and unique? Also is the business model sustainable. Those are things I look out for when I meet a founder.

DA: How do you invest, alone or along with others? Also, how do you find these startups?

TD: I only co-invest post-revenue, seed stage. As for the startups, I find them, they find me.

This means I tend to have a lot of people looking for deals that I can participate in but more importantly, I now do what’s called program orchestration. I try to stimulate thinking, through programs that develop entrepreneurs with organisation partners like Google and Microsoft. In these programs I find entrepreneurs. That’s me finding them. Every other day, from different channels there are founders reaching out.

DA: It seems like an endless stream, how does due diligence happen?

TD: Due diligence depends on the stage. At ideation, we say no. We either provide mentorship or advisory.  There are three types of due diligence we do.

Financial: Here we’re asking how much are you making, is this sustainable, what’s it costing you to acquire customers? Do the numbers make sense?

Legal: Are you legally incorporated, are there agreements between the founders and employees.

Commercial: What’s the size of your market? Is there a market? What kind of competition do you have out there? Is your market growth rate positive? We look at IP ownership – how you develop your products.

Before that we’re going to issue a term sheet. Typically if it’s a slam dunk, meaning someone has invested in you before, we can get it done within 30 days. If it’s a first time investment, then it can take up to 90 days.

DA: What’s your relationship with other types of investors like Private Equity and Venture Capital?

TD: I’m the only person that I know that’s crazy enough to say what I’m about to say. I’m an angel investor, I’m also the chief investment officer for a Venture Capital, I sit on the board of a Private Equity company (MBO Capital). So we get along pretty well.

DA: Hmm, all in one. So what have your exits been like?

TD:  There are different types of exits but in our continent, the only exit that’s a real one is the acquisition exit. Just like Stripe acquired Paystack. Those are the typical exits you’ll see.

For an early angel investment, you can expect anything from 20 to 50x return on investment. I’d like to point out that for every good exit, there’re at least ten bad ones. There are some deals I’ve lost money on that I’ve retained relationships with the founders.

For me, it’s more than just about the money. The challenge is to build a better future, so as long as people are heading in that direction then it’s your responsibility [as an angel investor] to support them. That’s how I see it.

If you don’t have relationships to support you, you won’t build good things. Exits are a good measure, but how I measure success is by those 15-18 founders that I’m constantly helping to be better.

TD: Are you focused on any particular sectors?

DA: Yes. First tech-enabled businesses. My background is in tech, so that’s the underlying thesis.

Then there’s the concept of essentials. We must all eat, so I invest in food and agriculture. Health, education and power are also part of essentials.

Then we have the future of work. Anything that facilitates enterprise from a technology  standpoint like the rise of Zoom in the past year.

Those are the areas I focus on rather than sectors because I start from a tech enabled stand point.

DA: What trends do you see?

TD: In my space, the use of Augmented Reality and Virtual Reality are underrated. When you consider that the average home now has a 30 inch screen somewhere in it, the potential for that is limitless. We talk about the reason fintech exists is because people have smartphones. Well, they’ll keep on making the screens better and more affordable. Currently because we’re used to the broadcast model, we’re not thinking about the interactivity that’s possible. That’s an opportunity I’m seeing that I expect someone to take advantage of.

Imagine a solar based screen that you don’t need to worry about charging. You can attach a router to it, so it’s interactive. This means I can teach a school remotely – one to many not one to one like on mobile. It means I can also remotely manage staff.

I’m not talking about exotic technology but simple technology that exists today. The price points to knock them together today are high but if you look at the opportunity cost, there’s alot to play for.

That’s just one opportunity, I won’t be surprised that a startup takes advantage of this as long as COVID keeps us out of each other’s way.

DA: You’ve written a number of books, are you working on a new one?

DA: Any hints on the name?

TD: The working title is ’Conversations with an African Angel.’

Ask An Investor
Adam Molai: “All that glitters is not gold, Investors often fall for presentation bias”
Daniel Adeyemi