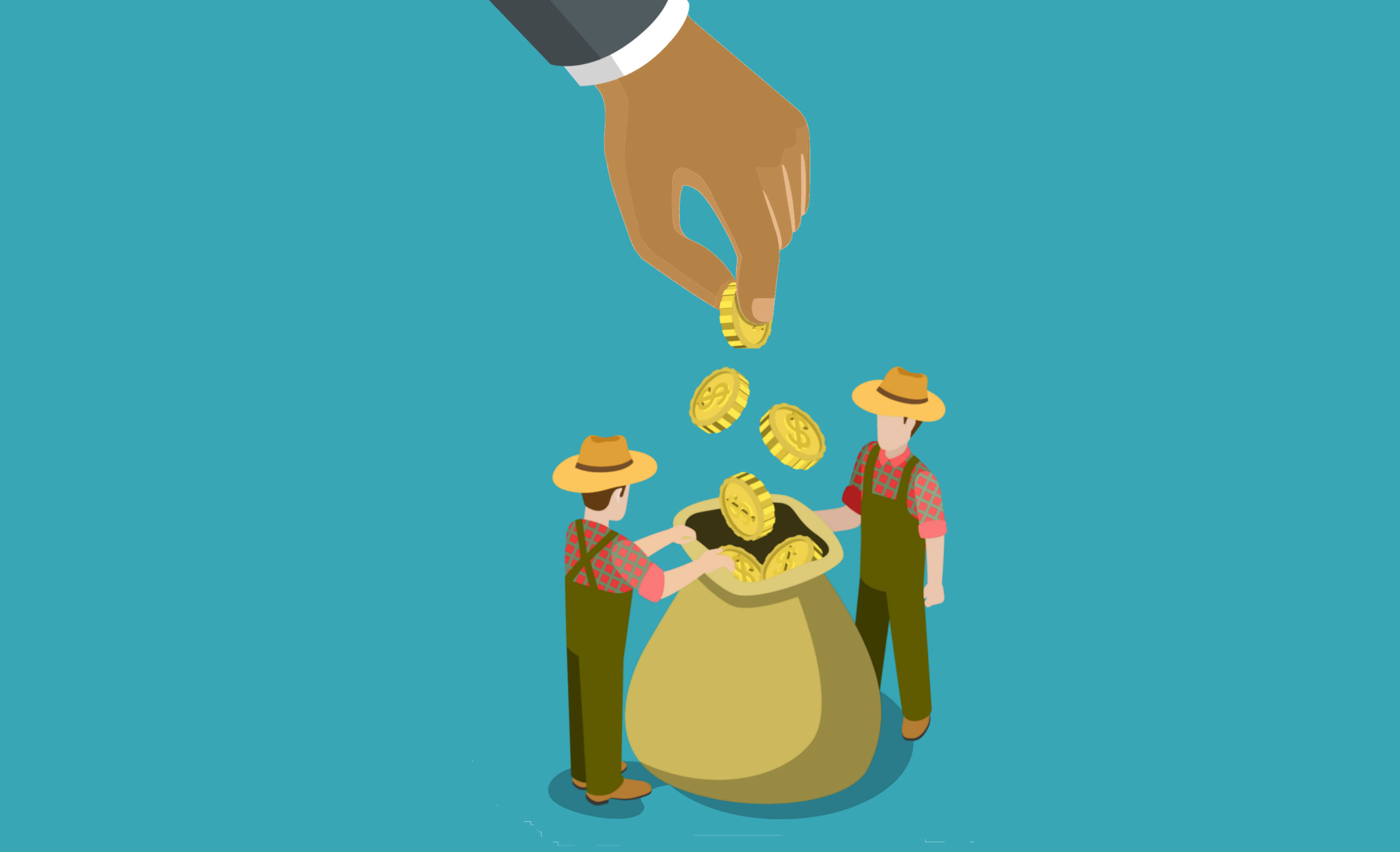 “It was all going fine until days before my scheduled payout,” says Biodun*, who in May 2020 and through reQuid had invested ₦250,000 in a joint venture for rice production in Kebbi and Sokoto states, Nigeria. The promise was to get a 28% return on investment (ROI) over 7 months before things took an unexpected turn.

Some days before payout on December 30, he received an email from the company saying rice farms nationwide had suffered “significant losses due to the impact of flooding in both states [Kebbi and Sokoto] and other unprecedented adverse weather conditions”.

“That was strange really because, according to previous updates, the farm had been doing well,” Biodun recalls in a chat with TechCabal. What followed was reduced interest from the promised 28% to 5% and, subsequently, a unilaterally fixed payout schedule by reQuid, spread between December and March of 2021. Biodun reveals he received the initial payment but not the rest.

At the time, the 34-year-old wasn’t the only one involved in a quagmire with reQuid, or broadly, agricultural crowdfunding platforms in Nigeria. There were thousands of others.

Crowdfunding is originally known to mean soliciting modest, non-repayable contributions from a large number of individuals to finance a project, cause, or business. But in Nigeria, the term has become synonymous with agriculture, a trend driven by startups that leverage online platforms to help farmers raise funds from the public.

During an almost 5-year boom (between 2016 and 2020), agriculture-focused crowdfunding companies—such as reQuid, Thrive Agric, and Agropartnerships—provided Nigerians opportunities to invest in agro-businesses and offered some of the best return on investment (ROI) in the country, ranging from 15% to as high as 60%, an attractive proposition for retail investors.

While similar, these companies operated different business models. Most allowed Nigerians sponsor actual farmers while also simultaneously helping farmers focus on cultivating produce, breeding livestock, and distributing harvest. But reQuid, which brands itself “The Amazon of safe investments”, aggregates players like Farmsponsor and allows its users to buy and sell trade units in farms operated by the partner firms. Whereas an investor in the latter can’t recover their money until the end of a fixed period, on reQuid, they can sell the units to other investors.

At their peak, one could hardly browse through a web or social media page without seeing an ad asking people to invest in one farmland or livestock through an app. These platforms seemed like the ultimate solution to Nigeria’s agricultural financing woes, won national and international awards, and their proposition appeared to be a win for all parties—the average farmer that needed access to funds to cultivate farms, Nigerians who sought investment windows with attractive financial rewards, and the Nigerian government, known for its famous “develop agriculture” rhetoric.

But within the last 2 years, particularly after the outbreak of the coronavirus pandemic late 2019, what was once heralded as an innovative agricultural financing method quickly became associated with Ponzi schemes and fraud claims.

This came after a barrage of defaults when investments matured, as complaints by investors over unfulfilled obligations became rampant on social media. In some instances, the companies changed cities after failing to pay promised returns, with no official communication issued to investors.

A review of reQuid’s portfolio on its website indicates that it has paid out investors in most of its projects while repayments on at least 15 are still marked “phased”, some of which matured as far back as June 30, 2021. Some players have since folded up while others like Thrive Agric have exited the crowdfunding business.

Most of these companies have attributed their failure to COVID-19. Amid the crisis in 2020, Thrive Agric blamed the pandemic, subsequent lockdowns, and off-takers for its struggles.

Rightly so, the pandemic did take most businesses unawares, but for agric crowdfunding companies, it merely exposed their flawed business model, according to Sam Ukoh, Head of Institutional Sales at AFEX, a private agricultural commodities exchange in Nigeria.

“It’s easy to pin the whole conversation on COVID-19, but that’s wrong,” Ukoh said in a call with TechCabal. “A popular saying in finance is ‘It’s easier to raise cash than to invest it.’ Before raising money, you have to ensure that the operating environment supports your business model and one component I think was missing here is infrastructure.”

The level of productivity or success in agriculture largely depends on infrastructure such as good roads, adequate power supply, a market network, and facilities for processing and storing farm harvests. In Africa, these are near non-existent, hindering agricultural productivity, and Nigeria is no different.

“It’s an entire value chain that starts with the production down to harvest, and then the eventual trading of these commodities. You need to have the machinery to support all of these processes to recoup investments and pay back your investors,” Ukoh says.

There’s also the issue of tenor mismatch among players when it came to utilising the funds raised, according to Ukoh. Many companies in the space rolled out products through which they obtained funds from the investing public with tenors below 270 days but invested the same funds in ventures that ideally would require long-term patient capital.

“A rule in finance is to not invest in long-term assets with short-term liabilities,” he said. “In terms of building the business, more equity funding would have been ideal while short-term working capital would be raised through crowdfunding. It just does not make sense for a company to buy a rice mill with funds raised from the public.”

In addition, investments in agric ventures promising such astronomically high returns, especially in Nigeria’s undeveloped agricultural sector, was always a risky bet for investors and unviable for the companies to sustain. “Commercial banks and institutional investors find it difficult to finance agriculture as it’s generally considered a risky space,” Ukoh points out. “It’s thus suicidal to promise such returns on a business whose value chain you don’t have full control over.”

According to a business analyst who asked to not be named, agric fintech platforms typically help the farmers raise funds at interest rates high enough to attract retail investors. But considering the farmer is yet to harvest and sell, the company demands some sort of payment guarantee—provided by a third-party such as a bank or non-bank financial institution—as a hedge to cover at least interest payments to investors.

If the farmer successfully gets off-takers (buyers for the harvest) and the produce is sold, they’re able to refinance the high rate and short tenor debt funding from the crowdfunding platform, which is subsequently used to pay the retail investors. Without buyers, however, the refinancing party provides funds to pay back the investors and thus becomes the new lender. Additionally, farmers also take insurance covers for their farmland.

“Any glitch in this system, such as failure to get off-takers, a man-made disaster that’s non-payable under an insurance cover, or failure or delay to secure payment security from a refinancing firm can cause delayed or failed repayments,” the analyst says. “The business is also vulnerable to a drop in commodity prices, the inability to cultivate the land as predicted, maybe due to drought or pandemic, among other factors. It’s a complex web.”

The complexity and risks of a business such as agriculture crowdfunding raise the question of why the Securities and Exchange Commission (SEC) had little to no laws in place concerning these agric crowdfunding companies. The landscape was unregulated in Nigeria until January 2021, when the commission issued a document detailing revised guidelines for the conduct of crowdfunding business generally, not just agriculture.

Under the new regulation, crowdfunding can only be raised through an online portal operated by SEC-registered intermediaries, which must have a minimum paid-up capital of ₦100 million and a current Fidelity Insurance Bond valued at 20% of the paid-up capital.

Operators are also required to issue sufficient disclosure to investors about the purpose and use of funds, with the threat of fines for defaulters. Per the SEC, these requirements should ensure the investing public is protected from operators with half-baked business models or suspicious activities.

“Many companies saw crowdfunding as a means to raising capital very quickly without going through the rigour of obtaining capital from commercial banks. It was a quick market-entry scheme done without sufficient due diligence,” Ukoh adds. “With regulation comes risk management.”

In the wake of the new SEC rules, however, most of the biggest platforms in the space have ditched crowdfunding, and it goes without saying that the myriad of default cases has eroded much of public trust in the system. A bigger worry, for Ukoh, however, is what this spells for the long-term future of technology-enabled agricultural financing or business in Nigeria.

“Due to the existing trust deficit, companies like ours, AFEX, that offer investors an opportunity to trade agro commodities through mobile apps, now have to double down on educating potential customers,” he said. “Not all investments in agritech are scams, but it’s only normal individual investors will tread with caution after what’s happened.”

The agritech sector is expected to reach a value of nearly $200 billion globally by 2025. It remains to be seen, however, how much value Nigeria can tap from the vast and dynamic market after the unfortunate string of mishaps with agric crowdfunding over the past 2 years.

Note: This article has been updated. An earlier version erroneously claimed that Farmcrowdy and Agropartnerships have folded up. However, both companies are still operational and the former only exited the crowdfunding space to operate under a different business model.

*Name was changed to protect the identity of our source.