After 10 years, Jumia is more than an eCommerce company 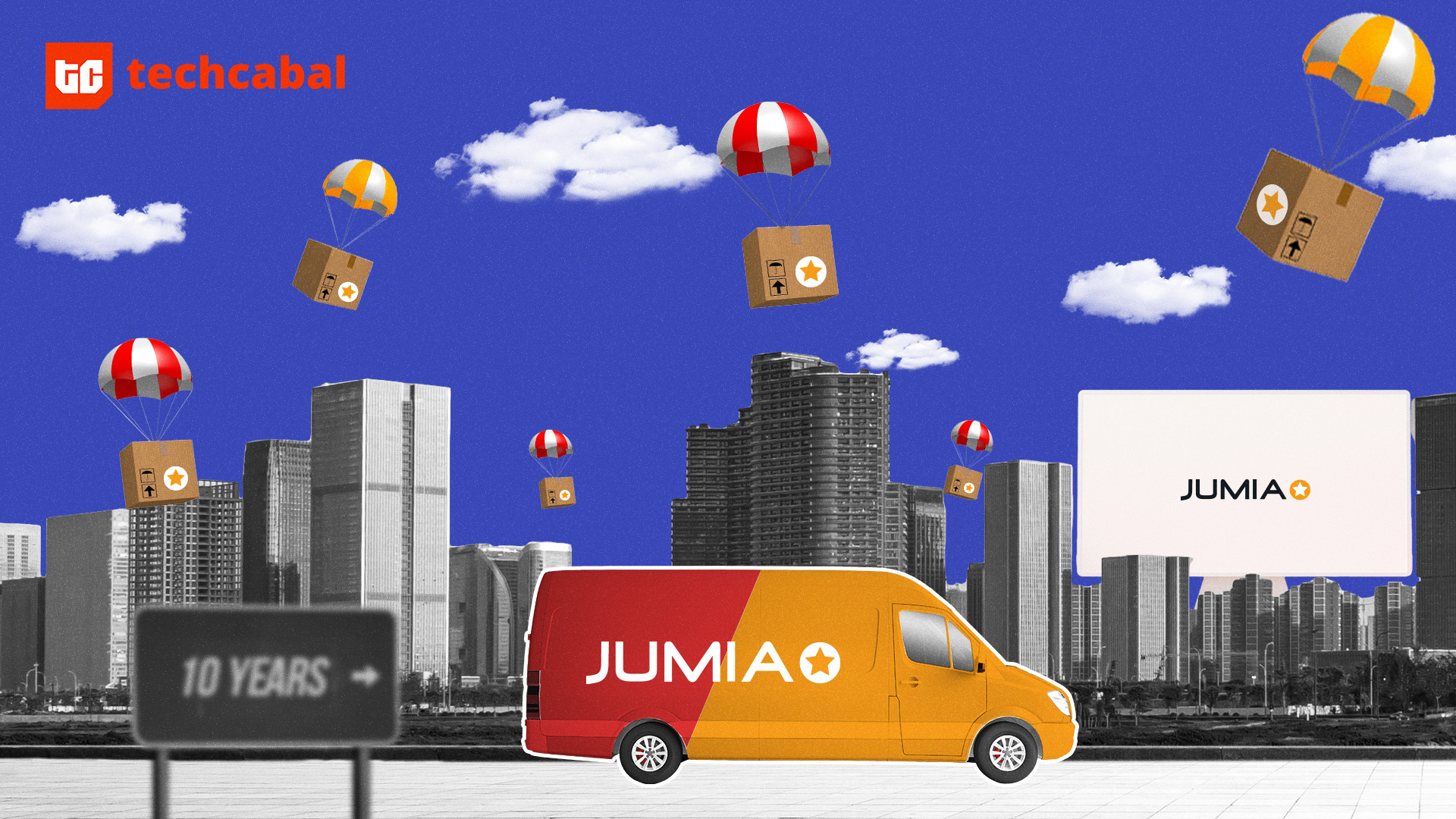 Over the past decade, the tribulations of MallforAfrica, Konga, or Payporte have served as a reminder that companies can and do disappear. The thriving companies of today are not the same as those of yesterday.

Fifty-four percent of African startups founded between 2010 and 2018 shut down, according to the 2020 Better Africa report. Globally, 90% of new startups fail and 75% of venture-backed startups fail, per Zippia. Under 50% of new businesses make it to their fifth year, and 33% of startups make it to the 10-year mark.

Despite this high failure rate and the arduous nature of building startups, Africa’s foremost eCommerce platform, Jumia celebrated its tenth-year anniversary in June 2022.

Over the years, Jumia has become a poster child of startup success on the African continent. It became Africa’s first tech unicorn in 2016 and then went on to get listed on the New York Stock Exchange (NYSE) three years later. The company has also provided thousands of jobs for Africans. It currently has 1,000 employees, more than 10,000 independent sales agents, and 350 third-party logistics partners. Jumia has also helped over 100,000 SMEs come online across Africa since its inception.

“From the beginning, we wanted to improve people’s lives through the internet, we had a big ambition and we saw potential in Nigeria and Africa,” Massimiliano Spalazzi, CEO Jumia Nigeria, told TechCabal over a call.

These noteworthy feats have made many describe Jumia, which operates across 11 African countries, as the Amazon of Africa, a description Spalazzi would rather not adopt.

Ade Atobatele, CEO of Remarkable Ideas, agrees with this as he believes Jumia started off as a clone of Amazon but hasn’t become all that the $1.3 trillion multi-sector behemoth is.

“The imitation of Amazon is a trap that restricts Jumia. It has to look beyond the Amazon model,” Atobatele said.

To understand what makes Jumia different from many other African startups and what the next 10 years could look like for the company whose sole mission is to improve the lives of people through the internet, let’s take a walk down memory lane.

In 2012, two Mckinsey consultants, Sacha Poignonnec and Jeremy Hodara, alongside Raphael Kofi Afaedor and Tunde Kehinde who held marketing and sales roles at Notore Chemicals Industries and Diageo came together to co-found Jumia.

AIG’s model was seen as a clone of its main backer, Rocket Internet, a European company which incubated and invested in companies. The strategy was to back startups which replicated the business models of other established, successful companies around the world. The expectation was that these startups would grow to dominate the markets they existed in or be acquired by the likes of Amazon or Uber.

Jumia, which was the biggest of the group’s businesses, was launched in Nigeria and within the first three years expanded to Algeria, Cameroon, Egypt, Ghana, Ivory Coast, Kenya, Morocco, Senegal, Tanzania, and Uganda. Within its first four years, AIG raised $493 million from Goldman Sachs, AXA, MTN, Orange, and Rocket Internet, reaching a $1 billion valuation (unicorn status) by March 2016.

Prior to the attainment of its unicorn status, there was some restructuring and rebranding at AIG. This included staff lay-offs and the replacement of the heads of Kaymu, Jovago, Easy Taxi, and Lamudi. The group’s brand name was also changed to Jumia, and the other companies adopted the Jumia brand name. Jovago became Jumia Travel, Lamudi became Jumia House, HelloFood morphed into Jumia Food, Carmudi became Jumia Cars, Vendito became Jumia Deals, and Everjobs became Jumia Jobs.

After Jumia was listed on the NYSE in 2019, it exited a few markets such as Cameroon and Tanzania in the bid to consolidate its efforts and resources on more profitable markets. The company also handed over the reins of its Jumia Travel subsidiary to Travelstart through a distribution and commercial agreement.

Losses and challenges on the path to profitability

These changes were important for Jumia’s growth and survival as the company was hemorrhaging millions of dollars annually.

Jumia has been making losses since its inception, losses it could afford to make because it raised almost half a billion in venture capital funding. This heavy loss-incurring route is often seen as a conventional one taken by VC-backed startups on the journey to conquering the market.

To put this into context, it took Amazon nine years to break even; and, as for Uber, throughout its existence, the ride-hailing giant has only reported profit once, in 2018.  Jumia’s closest competitor on the continent, Konga, which raised a total of $79.5 million in VC funding, was acquired by Zinox for an undisclosed sum—an amount rumoured to be at a great loss to investors.

The company is now keen on reducing the losses as it’s aggressively pushing towards profitability.

Atobatele, who is a tech consultant with over 15 years’ international experience, believes that Jumia’s top executives and its Research and Development being based in Europe is an avoidable cost driver.

“For a company that makes all its revenue from Africa, incurring these costs is having a pull effect on the company’s expenses,” he said.

Notwithstanding all these, Spalazzi, who has been with Jumia since inception, attributes the company’s survival and growth over the years to focus and consistency.

“Since the beginning, we have really focused on the customers. I know it appears cliche to say this, but that’s the reality,” Spalazzi said. “If you look at our products you’ll see that we focus on making our customers happy, as well as our vendors and logistics companies.”

Ecommerce companies on the African continent have had to deal with the lack of functional addressing systems, poor road networks, a general preference for cash payments, worries about fake products, and escalating security concerns. A battle Jumia is still fighting until this day.

“We were consistent in waking up every morning knowing that it’s going to be a battle,” Spalazzi said.

Jumia’s biggest hurdle came after it went public. The company’s stock price started off at $14.50 per share when it listed in 2019, then within 4 days rose to $49.77. This climb didn’t last as allegations of fraud and concealed losses based on a scathing report by a notorious short-seller which came a few weeks later, led the company’s share price to take a nosedive to an all-time low of $2.15 per share.

The company addressed the fraud concerns, by carrying out internal investigations, suspending three management staff and then paying $5 million to settle class action lawsuits related to the fraud claims.

Jumia which started as an e-commerce company has evolved to become a four-headed online giant: a marketplace with one billion annual visits largely dominated by third-party sellers; a logistics arm that handles shipments and deliveries for itself and as a service to other brands; a payments platform that’s the bedrock of its fintech ambition; and an advertising platform that plans to connect advertisers with African consumers.

“We started with eCommerce, then we expanded with Jumia Food and created Jumia Pay,” Spalazzi said. “We then realised that we’ve been delivering so many packages across Africa, and in the process have built a very solid business delivering last mile. So we started to offer our logistics services to anyone.”

“Looking at logistics, we have over 350 pickup stations across populated cities and remote areas in Nigeria,” Spalazzi said as he made references to different experiments carried out by Jumia. “We also experimented with the JForce team, an independent team of agents that are making money through commissions while educating customers on how to buy online from Jumia,”

Amidst the plethora of experiments and new product launches, some of them have so far worked out well and impacted the company’s bottom line positively. In Q2 2022, Jumia’s active consumers reached 3.4 million and its gross merchandise volume (GMV) reached $271 million, recording the highest GMV growth in the past two years. Jumia’s co-CEO, Hodara, shared on the company’s Q2 earnings call that 60% of shipped packages reached consumers within 24 hours of placing the order, a 3% increase from Q1.

Jumia Pay, the company’s fintech product, processes a significant portion of transactions on the platform and is used to pay for bus rides in Nigeria and university tuition fees in Egypt.

Competition and the next 10 years

In the past decade, the adoption of online shopping has increased. The pandemic accelerated this trend. An improvement in internet penetration and payment methods has also increased the addressable market for eCommerce companies on the continent.

These factors have led to the rise of the use of eCommerce sites and also social commerce platforms such as Instagram, Pocket by Piggyvest, Elloe, Gifty, Tushop. It has also stirred up rumours about the entrance of global eCommerce giant, Amazon, on the continent.

How will Jumia respond to its competitors?

Atobatele is of the opinion that Jumia doesn’t have any worthy competitor on the continent, as it is miles ahead of the other players in the space in terms of products and scale. Konga, Jumia’s closest Nigerian competitor, recently launched its food delivery arm, two years after Jumia Foods was launched.

Spalazzi believes that while the company cannot control where people go, Jumia is banking on building an ecosystem of products that meet the needs of customers.

“Once we’ve built the base of eCommerce, food delivery, payments, logistics and advertising, we can build several other services on that,” Spalazzi said. “So our roadmap and our vision is the same as the first day, we want to improve people lives through the internet and satisfy their needs as much as possible.”

The possibilities are endless with Jumia, which has made it this far as a result of its focus on customer needs, being financially buoyant to bear the losses, and constantly experimenting and launching new products to unlock new revenue streams.

“The problems are always the same: How do we make customers happy?” Spalazzi said.

For Jumia to truly earn its stripes, Atobatele believes it must introduce products and features that aren’t in the Amazon model. He suggests that the company can adopt the model of Bangalore-based startup Dukaan or Shopify by giving merchants tools and software to run their business.

“If you give me tools and my online store is connected to your marketplace, it’s difficult for another marketplace to come in and get me to move,” Atobatele said.