There have been about 200 of these experiments around the world, and maybe only 4 or 5 have been successful.

This was how Michael Joseph, Vodacom’s Director of Mobile Commerce described mobile money to the Financial Times in 2012.

When Michael Joseph talks about mobile money, you should listen. Until 2012, he ran Safaricom, the Kenyan company that launched M-Pesa (“pesa’ means money in Swahili). The quote is a reminder that mobile money remains a hit or miss initiative, and most adopters have struggled to show the type of traction seen in Kenya.

Why is Kenya seen has the standard measure of mobile money’s success? The answer is simple; M-Pesa’s numbers are staggering. According to this article, 17 million Kenyans (70% of the adult population) use M-Pesa through its network of 40,000 agents and an estimated 25% of Kenya’s gross national product flows through the channel.

But it is useful to remember there are many reasons mobile money worked in Kenya and is struggling in similar markets. The biggest one is first mover advantage, which meant regulators allowed the scheme to proceed without hindrance, and ensured development led regulation, unlike in many markets where development lags behind regulation.

But this only tells part of the story; the high cost of domestic remittances in Kenya meant a cheaper alternative was likely to grow, and some analysts suggest the violence in 2008 was a critical accelerator for the service. As the legend goes, during the post-election violence, M-Pesa was used by educated urband dwellers to send money to relatives trapped in the villages and slums.

I left the most controversial reason last; the innovator (Safaricom) succeeded because of its status as a monopoly, which ensured the investment in technology and an agent network was protected, leading to an easy dominance of the money transfer industry.

Fast forward to India which is implementing mobile money with less success than Kenya, despite having a much larger rural population and all the necessary factors for a successful implementation. The Reserve Bank of India sees Mobile Money as a banking service, not a telco enabled money transfer service, and regulates it as such. It recognizes mobile money as an alternative currency, so there is emphasis on consumer protection. The RBI also believes regulation will ultimately allow for a much bigger scale than the Kenyan model, and says players will be able to offer more complex savings and investment products in the future, if well regulated from inception.

The result of the regulation in India is that telcos that want to enter this market must partner with a bank. Apart from making it less attractive for telcos to participate, the regulation also means users need basic identification to open “accounts” and must go through some due diligence, which reduces adoption. The Indian regulator argues it is playing the long game, and suggests the reward will be a system that holds up decades from now.

As you might be aware, Nigeria chose the Indian route, and has faced similar struggles to gain traction. Critics of the model have pointed to the Central Bank of Nigeria as the villain, suggesting regulation is protecting banks and crippling growth. Here, I must admit my bias; I have spent some considerable part of my life in banking, and believe there are valid reasons for a regulated system. However, instead of joining the debate about the model we are implementing, it might be useful to highlight some hygiene factors necessary for success.

The major reason Safaricom was able to navigate KYC concerns in Kenya is because Kenya has a national identification system. The only way to scale adoption is to reduce the KYC requirements to open accounts or transact using mobile money. Somewhere between the SIM registration exercise the NCC “completed” this year and a national identity project, we must find a permanent solution to the identification hurdle plaguing Nigeria.

It doesn’t matter who leads mobile money (bank or mobile network operator), if identification remains a problem, scale remains a dream. Once KYC requirements are easy to achieve, customer registration should take less than 5 minutes, making it convenient to sign up.

The only platform that allows for end-to-end encryption is the SIM. This is the biggest shout to allow for MNO-led service providers, because since the SIM is controlled by the MNO, it means only the MNO-led solution offers full security.

To work around this, the bank-led solutions have set transaction limits to minimize fraud, but the bigger question has not been asked. Will telcos give up full control of the SIM in exchange for more participation in mobile money? On the back of this, providers must be ready to offer money back guarantees to early adopters.

In markets where mobile money has worked, it was the early adoption by urban dwellers and salary earners that drove usage. If the offering is going to work as a domestic remittance channel, the initiator of the remittance must trust the solution, otherwise money will continue to move via recharge cards and bus terminals.

I believe transaction costs in Nigeria are too high, and the system can do with a lot more free loading. One of the attractions of mobile money is the availability of cheaper cash in/cash out options. For example, it will cost me N5 to send N1,500 recharge card to my relative in Ikole-Ekiti by SMS and N25 to the same via mobile money, so no prizes for guessing what option I will go for.

The hockey stick for investment in mobile money will be steeper than normal, and investors must be ready to drop average revenues in exchange for scale. Until costs drop by at least 50%, small ticket transactions will continue to happen using airtime.

Hey, some steriods from our good friends in government won’t hurt too. In Afghanistan, adoption grew mainly because the government used mobile money as a means to pay policemen, especially those in remote locations battling the taliban. According to this article, the result was not only a reduction in ghost soldiers, but policemen thought they received a 30% increase in salaries because the middlemen had been cut out.

There is no harm in government administering low value salaries and cash transfer schemes via mobile money. It will eliminate waste and help drive adoption.

Mobile money will always start as a money transfer service, but expansion into a savings and lending service is inevitable. In Kenya, M-Shwari is already offering overdrafts to the unbanked.

While I am fully in support of lending to the poor, it must be done in a way that ensures savings are not eroded. This is why regulation of mobile money is critical. We have seen the impact of having a loosely regulated financial industry, and must not make the same mistake with mobile money.

The big hurdle is the unfamiliarity of financial sector regulators with non-financial institutions, but we can learn from Safaricom’s move to bring Susan Mudhune on its board. By getting the former chairperson of Kenya Commercial Bank on its board, Safaricom has started to bridge the language barrier between the telco and its future regulator, the Central Bank.

The spread of agents is a big factor in adoption. If consumers have limited options to cash in or out, it removes the convenience associated with mobile money. Apart from MNO agents, mobile money operators must use the extensive distribution network built by consumer businesses like Coca-Cola, Procter & Gamble, Unilever, Nigerian Breweries etc.

This takes me back to the cost discussion. If the revenue sharing model does not create an incentive for the agent, sign up will be slow. Today, mobile money operators must be willing to lose significant revenues to drive growth, and until agents earn 75% of the transaction fees, the business might not scale.

In summary, Kenya is clearly an outlier with 46% of Kenyans sending a domestic remittance monthly, compared to 18-23% in the next set of countries including Nigeria. This is the biggest driver of mobile money, so we must common size our expectations.

Also, the model employed will always be open to criticism; since both bank-led and MNO-led models have significant advantages and flaws. Nigeria has chosen the bank-led model which I believe is harder to scale, but could prove beneficial if full financial inclusion is to be achieved.

The ultimate test of the model is not today’s numbers, but how the system grows when the hygiene factors are in place. It is clear that mobile money has all the tools to disrupt traditional banking systems, and will eventually happen. 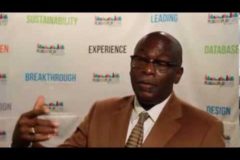 For those who aren’t convinced that the ICT ministry’s Silicon Valley expedition isn’t just another Nigerian bureaucratic junket, Plug And Play Tech Center (another stop on the ministry’s tour) were kind enough to make a much more flattering video than the one with Bloomberg West, where Oluseyi Onabanjo, a special assistant to the ICT minister […]