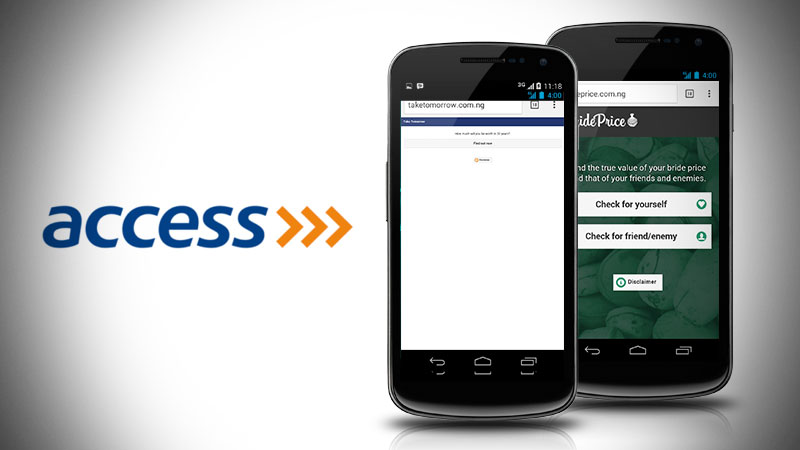 After the stunning success of BridePrice.com.ng, Access Bank hired the company behind the site – Anakle – to create their own viral phenomenon.

It seems that the bank was hoping that the site (which doubles as a rather obvious data-mining tool) would spread far and wide as Nigerians of all shades would rush to calculate their net worth and share it with their friends. After all, women from across the continent were calculating their bride price, a modified version of net worth, and telling the world the results. Surely, in the same vein, people would calculate their net worth and share too.

Turns out that virality is a much more delicate science than sticking a sliding website with dashes of humor in it. Not to blame Access Bank or Anakle; both companies are pretty competent, but somehow, the results aren’t the same. Here’s why I think that happened:

Everyone wants more money (even toddlers it seems), but honest discussions about money are scary for most of us. A spreadsheet that shows that you might actually in a worse financial situation than your lifestyle suggests is not the thing you want to see first thing in the morning. Or at any time of the day for that matter. This website, while starting off light-heartedly, starts asking real questions that make you realize – “man, this is for real”. And who wants to find out that they’ll only be worth N10million in 20 years? Exactly.

2. Most People are Private About Their Money

How many of your friends would be willing to tell you their exact salaries today? What about their expenses? Exactly. Virality requires people to share what they’ve seen to “infect” their friends. I have no doubt that many people went through the app (Anakle can’t releasing traffic figures) but I’m guessing most people would rather not to share the results, preferring to either rejoice or mourn privately.

BridePrice was a brilliant product – designed thoughtfully from start to finish. In contrast, TakeTomorrow feels a lot less polished. The options are too granular – why not use date ranges instead of asking for my specific age and asking me to pick it from a really long drop down? In an attempt to the “clean”, it ends up being plain. They’ve removed the compulsory email field at the end now, which was a horrible idea to start with.

So can you Recreate Virality? In the end, it seems that virality is lot more than getting the right tech and buttons together.  Content and context matter a lot.

BridePrice was funny and entertaining, so even though it had 13 questions, it felt like 5. On the other hand, TakeTomorrow’s 14 questions end up making the quiz feel like a chore. It’s difficult to see how to make a subject like money and financial planning be fun, but that’s the challenge of the time.

That being said, it’s very refreshing to see Nigerian corporates getting more creative with their marketing and advertising. Many brands made a show of adopting technology beyond banner ads but Access Bank actually went out and did it. Looking forward to more from them.