“What Do Devs Do?” by Sales People 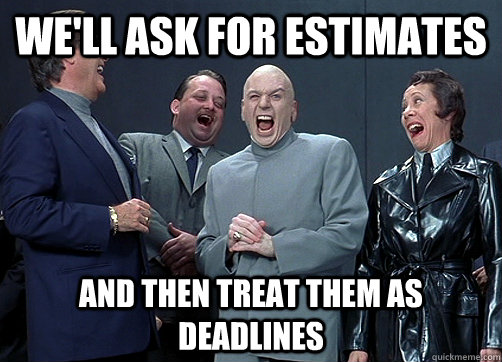 In the Nigerian digital media business, sales people and devs constantly lock horns. Client wants microsite and you, as a capable salesperson that you are, you’ve told the client not to worry and it will be ready in two weeks – full option ready. Then you get to the office all excited and stuff, breaking down this awesome deal that you just landed to the dev that is going to built the thing. “Two weeks ke? This thing cannot be ready in less than two months o!” the dev tells you.

Now you’re just there. Too shocked to respond – your mouth ajar but words are not coming out. In your mind you’re like “Ordinary microsite lasan.” Now you’re worried about telling the client that you will not be able to deliver in two weeks. Even worse, how will you explain that two weeks is now two months? What the hell does this person even do that they cannot finish ordinary microsite in two weeks? Maybe you should poison his drink.

Okay not so fast – maybe not that last part but you get the picture. Stories like this happen ALL the time and salespeople basically hate devs and vice versa. So what do sales people really think about devs?

“A dev is supposed to provide every necessary available tech solution a client requires,” said Paul (not his real name) at Guardian. Beyond that Paul also told me it is very important that devs he’s working with do not give timelines that affect the quality of work required by the client. “The dev makes my job easier by first not promising what can’t be delivered within the clients expected timeline,” says Paul. “If it’s going to take two months, it’s better he/she say so so I don’t need to start managing the clients expectations. Promising delivery and eventually not delivering means the client’s trust will be breached and we don’t want that.”

Having rules for the dev is cool and all that but if there is no synergy in delivering the client’s vision it could be problematic, as Paul found out – the hard way. “A dev with an organization I had previously worked with, made me lose an account and trust from the agency responsible for the account. That was tough,” he said.

Rachel (not her real name) thinks it’s not so bad. “Yes, they can be absolute assholes sometimes but if you have a good working relationship and you know how devs operate, it should be smooth sailing,” she said. “I have a pretty good grasp of how they work and the limitations they may have to deal with in doing their work so I tend not to overpromise clients if I don’t have a dev at a meeting.”

Still, Rachel said she had also been in trouble a couple times at her old job because a dev didn’t come through. “This one time, the client wanted a redesign of their app along with some backend implementations. I was still new in game so when the dev didn’t deliver when he said he would, I almost lost my mind,” she said, laughing. “In the end, my boss [at the time] had to step in to handle the client. The dev and I got queried, the company lost the account and all my efforts amounted to nothing. It was a mess.”

To me, it seems devs and sales people just need to understand how their roles work and possible limitations each may have (light, internet, SARS, difficult clients etc). It’s not easy to sell, especially in digital media (in Nigeria), and it’s all about relationships – which tend to be easily damaged.

On the flip side, it’s also not easy to be a dev. Hours of coding, troubleshooting and hacking is not beans. Even for the baddest of them, delivering a client’s vision is easier said than done. That’s why it’s crucial that sales people and devs are able to find a working solution to every client need.

In the words of US comedian, Eddie Griffin, “Why don’t we come together like butt cheeks and be the shit!”