Behind the scenes at Rise where dollar-denominated investment is king 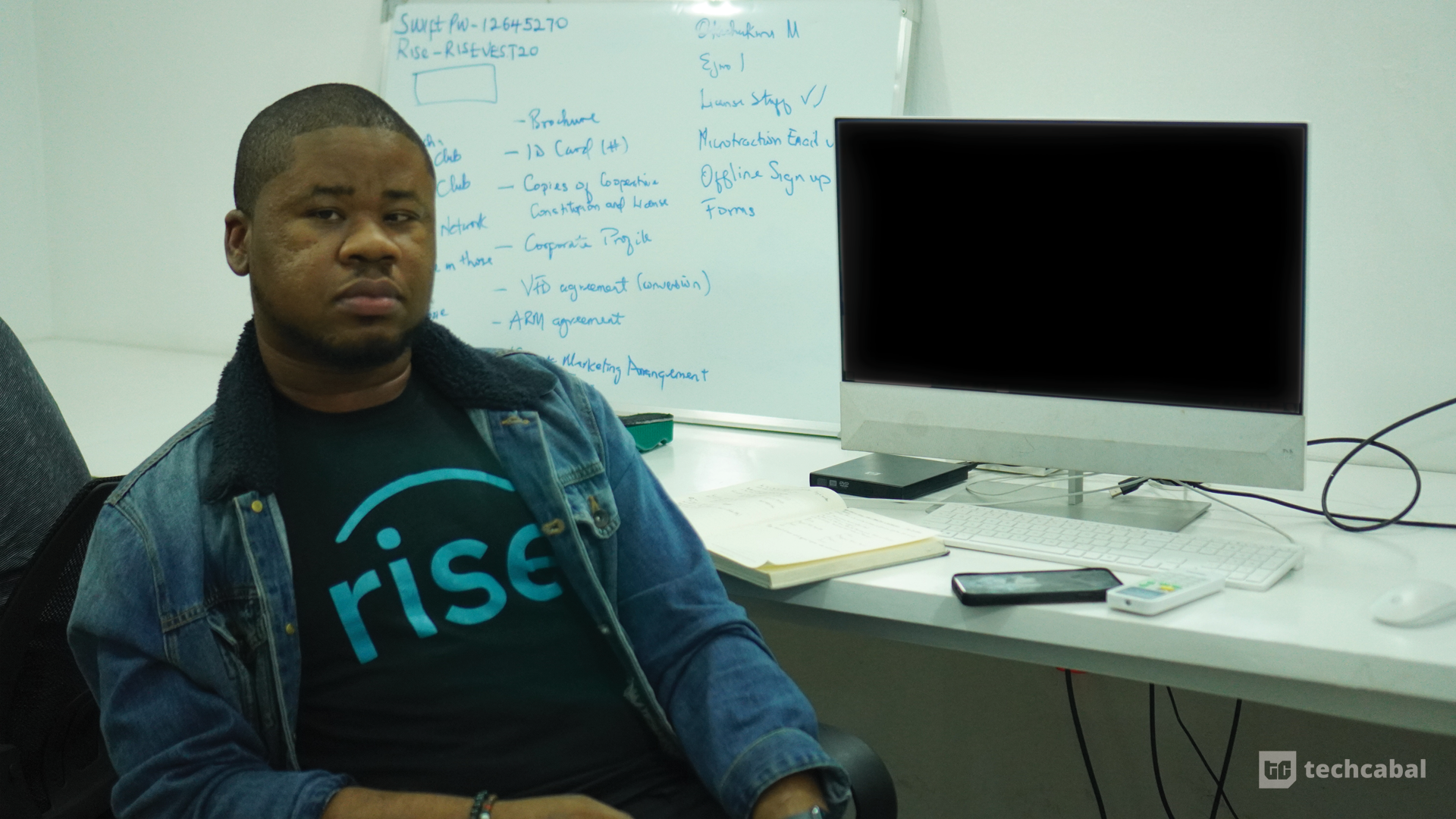 A pair of sentences sting you from the first post on Rebel Money, a financial knowledge resource that has grown to become Rise today:

…it’s only two things that determine if you get wealthy or not. Consider this the two levers of financial freedom: increase your income, or lower your expenses.

At the time, Eleanya Eke – the blog’s author – was transitioning to a full-time analyst role at PricewaterhouseCoopers, a professional services firm. Five and a half years on, Eke has launched a technology-enabled micro-investing service for the Nigerian consumer.

The Rise app was released to the public late January following months of beta testing. Rise promises to plug Nigerians into verified pools of dollar-denominated investment options, from US stocks and real estate to Eurobonds.

For Eke, it’s been a journey from feeding a favorite passion to building a generational institution needed by Africans.

Before he became a mid-2000s political science major in a US College, Eke would gulp financial knowledge everywhere he found it.

A strong desire for investments had seeped in from observing his father’s personal dealings in the Nigerian stock market. Over time, Eke absorbed enough streetwise trading tricks to begin investing for classmates.

He eventually dumped the study of White House theatre for Wall Street bounty-hunting, sealed by a switch to an accounting major as the 2008 financial crisis beckoned.

Those were the foundations for forming Rumex in 2018, a semi-formal venture for helping people invest in US stocks. It helped that he had been publishing Rebel Money since 2014, a good base for proving his competence. Cashestate, a platform focused on dollar-denominated real estate investing, followed after Rumex.

“If you are making returns in naira, no matter how high those returns are, eventually devaluation will take those returns away,” he tells me of his insistence on dollar assets.

Rumex and Cashestate had to be combined to form one platform that provides users a diversity of options, he says. The result was Rise, where anyone with a BVN and valid identity document can sign up in minutes and begin investing with $10.

Trust us, we are legit

Rise is promising to relieve much of that work from investors. Similar to the way a venture capitalist would pitch to limited partners, the startup tells consumers to bring their money and see it yield justifiable returns.

“We don’t guarantee returns, except on our eurobonds,” Eke disclaims as I quiz him on the risk Rise takes in not towing the path of his competitors. Trove, for example, simply provides access to foreign stocks without taking on the burden of investing for users.

Yet, Eke is confident in his team’s ability to deliver on a high bar of reasonable assurance: “What we tell you is, based on what we know and where the market is, here are the returns you can expect.”

Powered by technology and human expertise

You probably noticed the flurry of turquoise-coloured Twitter profiles in December. Rise’s early traction has flowed from Eke’s reputation managing investments at an individual level.

Before moving first to a website and then an app, he would collate names and deposits on spreadsheets for about 100 people. Periodic zoom calls featuring no less than 40 people at a time served as the medium for providing investment lessons and general updates on stock performance. An active Telegram group for an informal Rise investment club currently boasts more than 800 members, with a dozen or so of them attending Rise’s offline monthly meetups.

At 30, Eke is not exactly a new kid on the block having co-founded BuyCoins, a Microtraction-backed cryptocurrency exchange platform.

But Rise has grown beyond a one-man ship. Bosun Olanrewaju, an early Andela alumnus who does the legwork for Rise in the United States, is a co-founder. Another co-founder, Tony Odiba, left a job at the National Airspace Research Development Agency to lead Data Analytics at Rise.

On funding, Rise has so far raised $62,000 in pre-seed from a combination of angel investments, Eke says.

Kola Aina (as an Angel Investor), the Future Africa fund, as well as family and friends are the sources of the fund. To fulfill their ambition and raise capacity to meet potential new demand, it is to be expected that they would be in need of more capital.

Micro-investing apps are the new fintech kids on the block. The field is yet to be entangled in the politics of regulation in the way, say, bike-hailing has died in Lagos, for all intents and purposes.

Does the Securities and Exchange Commission (SEC) see the emergence of startups like Rise as a threat?

Eke says he hasn’t gotten a sense of hostility from regulators.

Operating with a cooperative license, Rise and similar startups are in line with the SEC’s goals to make stock investing part of consumer’s wealth-creation habits. Rise’s mission to get Nigerians plugged into wealth pools denominated in dollars effectively brings money into the country, rather than taking it out.

In for the Long Game?

Eke’s team of nine works out of a private residence in the Surulere area in Lagos. A spacious room with recently-painted white walls, a couple of PCs, a printer and, of course, a white board marker. It’s the paraphernalia of a startup still getting its feet on the ground.

I wonder if he’s in this for the long game. On the consumer side, you don’t give someone your money to invest unless you are patient. But then you want to be assured that the company looking to build an investment culture in Africa is taking a long-term view of how it sets up its structures.

Will Eke get bored at some point?

“At the risk of sounding fake deep, there are some things you just know you are supposed to do,” he says. “Regardless of whether you are paying me to do it or not, it doesn’t feel like work. It is what I enjoy.”

Giving up offers from Goldman Sachs and Wells Fargo are part of the sacrifices he’s made to pursue and grow Rise. Yes, he hopes to earn the big money salaries that would have come with such offers but not before taking his barely two-year-old startup to stability.

Rise’s launch and kick-off have been turbulence-free. But doing business in Africa comes with the risks of political instability and policy summersaults. Is Eke preparing a cushion for that?

“For us, our job is to make sure that regardless of what happens on the regulatory side, we have a response that will protect our users.”