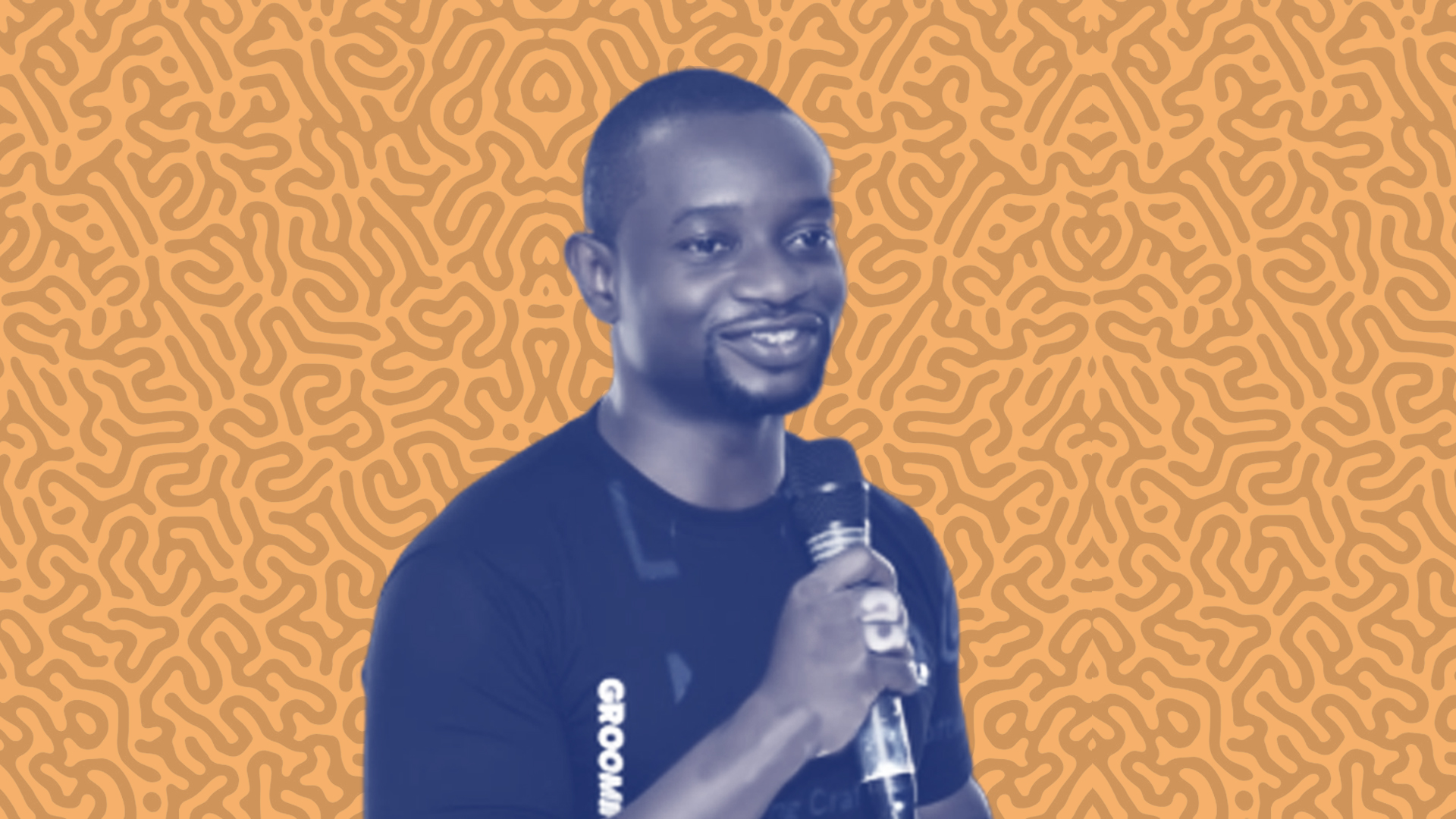 Chibueze Ukaegbu’s journey to founding LearnFactory was a whirlwind and in some way, is the continuation of his father’s legacy as the founder of the first computer school in old Imo State in eastern  Nigeria— Computers & Systems Planners Limited.

What this meant was that his introduction to programming and computing began quite early. By Primary 5, he had learned two programming languages, Lotus 123 and WordPerfect and between Primary 6 and JSS 3, had taught himself QBasic by reading books from his father’s library.

“Interestingly, I didn’t want to study Computers; I wanted to study Chemical Engineering, just like my father,” Ukaegbu says.

But between ‘98 and ‘99, admissions to study Chemical Engineering at the Obafemi Awolowo Universities went to naught due to student unrest and strike actions. He ended up at the Enugu State University of Science and Technology (ESUT) studying Computer Science and Engineering. Not satisfied with what he was learning in school, he applied for and won a partial scholarship with the National Institute of Information Technology (NIIT) and for two years out of his five-year course, shuttled between Port Harcourt, Aba and Enugu learning Java, Oracle 9i and obtaining a professional certification alongside an undergraduate degree.

After graduating, Ukaegbu turned down a post-graduate opportunity in the UK in favour of a 3-month missionary training course in Ghana. He ended up spending three years there, returned to Lagos in 2011 and veered off the technology path briefly.

The Lagos state Bus Rapid Transit scheme was just being rolled out at the time and there was a rush from private owned companies from whom bids had been requested to partner with the government on the scheme.

Together with a fellow from the Ghanian training course, Timothy Arowobusoye, Ukaegbu founded  TAG Travel and Tours and through dogged determination, with very little capital, and what he considers divine intervention, the duo secured a commitment from Innoson Motors to handle the bus infrastructure and submitted bid documents to be a part of the BRT scheme. They did not win the bid. This sudden deviation from tech into transport had stemmed from a personal tragedy—a robbery incident where personal and work effects had been stolen and two elderly women pushed out of the moving vehicle. But after a few months of struggling to feed and sleeping at bus parks in Yaba and Festac, his spirit was on the verge of being broken.

“Timothy and I watched our dream dying before us for lack of funds, and it was a really painful process.”

By the end of that year, Ukaegbu moved to the UK on the invitation of  mentor Ayoola Bankole where he spent the next three years working and recouping his losses.

LearnFactory was born in 2014 after Ukaegbu applied for and won the federal government’s YouWIN programme. Launched by the Goodluck Jonathan administration in 2011, the Youth Enterprise with Innovation in Nigeria programme was geared towards supporting young natives with duly registered businesses through equity funding disbursed in tranches by participating commercial banks.

Ukaegbu’s winning plan was to build a tech hub to serve the Southeast region of the country away from Lagos where there was already a lot of growing attention towards the technology sector and infrastructure/knowledge capacity building was well underway. They were awarded ₦8 million (about US$48,500 in 2014) to establish the hub. In January 2015, after receiving the first tranche of the funding, the company’s operation kicked off.

“When we came to Aba, there were two dominant mentalities,” he says.

A number of potential students were fixated on the idea that quality software development training could not be obtained anywhere in the country outside of Lagos and Abuja. Some others felt the cost of training was too high.

For the first three years, the company was sustained by the YouWIN funding.

“Aba people love their money and they try to hold onto it a lot. They try to get the best value for as cheap as possible.”

In 2018, Ukaegbu decided to reverse the paid 3-month software development internship into a 6-month tuition-free programme. That the classes are free does not subtract from the wide array of subject matter the students are introduced to; web and mobile development, desktop development with Electron, cloud computing with AWS/GCP/Azure, DevoOps with Docker and Kubernetes, Machine Learning with Tensorflow.js and Blockchain apps with Ethereum and Solidity.

The first cohort of free-tuition interns in April 2018 comprised 20 students out of which 12 graduated from the programme. Half of them went on to find job placements at companies in and outside Lagos, including the Meltwater Entrepreneurial School of Technology (MEST), Ghana, while he absorbed the other half into LearnFactory using their experience and feedback to revise the training curriculum.

Training software developers is an expensive endeavour. At Andela, one of the earliest companies that sought to train and outsource African talent, training a single software developer can cost up to US$15,000. Ukaegbu estimates the training and welfare costs at the LearnFactory for one intern to be between  US$4,500 and US$5,000. And many find ways to leave after these capital-intensive training or focus their efforts on working for foreign organisation who can pay competitively. A number of ‘free’ software developer training models employ a pay-back scheme where developers pay back their tuition once they are able to secure jobs post-training.

LearnFactory has no such caveats in place at the moment and employs two primary business models to sustain its operations; outsourcing and grant funding.

“We’ve gotten one or two outsourcing jobs. One from the UK, through a contact in Lagos then another with someone in Malaysia,” says Ukaegbu.

But finding grants to continue the training hasn’t been a walk in the park. One of the organisations they were applying to last year hinted that they did not fund for-profit organisations to carry out training.

Ever the one to find a way out of even the most impossible situations, Ukaegbu set up the LearnFactory Foundation towards the end of last year as a not-for-profit arm through which grant funding can come in for the purpose of the free training programme.

Last year, about 100 students were enrolled in three cohorts beginning April, July and October and he says 90% of them have job placements. Out of the October cohort still currently in training, two have already been invited for interviews at various organisations while one has been offered a teaching position at the University of Nicosia in Cyprus.

To ramp up activities as well as explore other revenue streams, LearnFactory recently set up shop in Owerri where it is looking to run specialised paid programmes in Machine Learning, Artificial Intelligence, Python and 2D/3D Animation. And interest has been very satisfactory.

Due to the COVID-19 outbreak however, classes which were meant to begin on April 20th have been put on hold as the country goes into a 2 week-lockdown.

Lagos, no doubt, remains one of Africa’s rising technology hubs. But for Ukaegbu, it is important to decentralise skills like this and reach otherwise hard-to-reach individuals to build all-round human capacity.

And with every new project the LearnFactory undertakes, this mission stays at the core.

Last year, in partnership with the Imo state government, 34,000 Imo youths have been signed up for coding classes  over the next four years. Through another programme, Education made Beautiful, Engaging & Delightful (EmBED) for kids, children in primary and early secondary school are being trained to code through school clubs (ICE Clubs) and learning labs  (ICE Labs) in a way that is qualitative and fun. So far, 1,300 children have benefited from the program and LearnFactory is set to reach 10,000 more thanks to a Google Impact Challenge Award which the program won in 2018.

There are also training programs specifically targeted at women, teenagers and teachers.

In spite of its for-profit ventures, LearnFactory is more an impact business at whose core is driven by Ukaegbu’s willingness to give of what he has to better the lives of others, a philosophy he’s emulated from his family’s generosity. Five years down the line, the journey is really just unfolding.