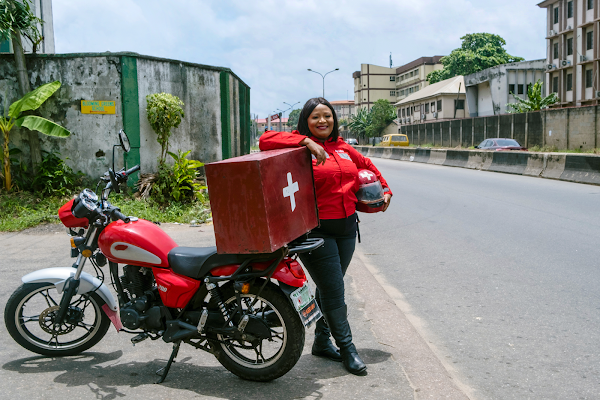 LifeBank isn’t a cool startup and unlike other startups, it doesn’t care about announcing funding rounds. But yet this Nigerian health-tech startup has had tremendous impact on society. It’s present in 8 Nigerian states and Kenya, and has saved over 10,000 lives.

In the third episode of the Building From Ground Up series put together by the UK-Nigeria Tech Hub in partnership with TechCabal, Temie Giwa-Tubosun talks about her journey building LifeBank. She opens up on why she started, why the world needs more female leaders, the operational challenges LifeBank faces and many more.

After her first year in a California graduate school, Temie returned to Nigeria for the first time since 2001 to intern for the Department for International Development in Northern Nigeria(DFID).

In the course of her work, she got a front-row view of the issues people, especially women, faced in the rural parts of Nigeria.

She had always been obsessed with maternal health, and this led her in later years to work at the WHO and Global health corp in Uganda.

Despite all these experiences, becoming a mother convinced Temie she had to do something more impactful. She knew people in Nigeria and other parts of Africa didn’t have access to the basic healthcare facilities she had during childbirth in the US. So she first set out to look into what causes women to die during childbirth.

While researching, she found out that postpartum haemorrhage, the loss of 500 ml or more blood within 24 hours after birth, was a major cause of the death of women around the world. A problem predominant in developing countries around the world.

“In the hubris of being young, I thought, ‘I’m going to solve that problem,’ we’re going to save mothers by ensuring that blood is available to them during childbirth. That was the  single thought that started LifeBank.”

Unlike a fairy tale, it doesn’t just end happily ever after here.

LifeBank went on to face challenges along the way, with human problems and a very demanding schedule being top of the list.

“I thought  healthcare would be exempt from the corruption problem. I always expected a complete focus on science and results. The reality is that it is humans who do this work and we still have a problematic culture in Nigeria.”

LifeBank has grown its line of offerings to deliver more than blood, it also delivers oxygen, medical samples and even does some work around COVID-19 testing.

“It’s on-demand, and 24 hours. Across 8 states in Nigeria, and now Kenya, we have not shut down in five years.  It’s difficult to move supplies 24/7 , delivering it in under 50 minutes in all these states every day. It’s especially difficult in Nigeria where infrastructure is still very underdeveloped.”

It’s been a daunting challenge working round the clock but what keeps LifeBank going is  its visible impact on  lives.

Challenges faced by a female founder

It’s not enough that there are challenges related to the business, Temie also spoke about the challenges she faces as a female founder.

“We live in a patriarchal world where people expect leadership from men. Often, people don’t expect women in positions of power. Even worse, you don’t think of a mother or a relatively young woman as being a leader.”

“For me, what matters is visibility. Having lived and worked in Europe and Nigeria, I prefer Nigeria’s brand of chauvinism, because it is open and public; you know where you stand.”

Talking about how she handles these issues, she says.

“People don’t consider leadership a feminine thing. To me, I’m very comfortable being a leader. I don’t try to be a leader, I am a leader because I lead. I have a ton of experience in the work that I do, I am incredibly passionate about the work I do. I learn and I inspire my team.

I have empathy for people who feel this way. Women lead well with emotional intelligence. And the calm is invaluable

Do you announce  fueling your car?

Many startups make announcements when they raise funds but Temie doesn’t think it’s necessary. She equates this to announcing fueling your car. She’d rather announce what LifeBank has done.

“Fundraising is a tool, not an end. Raising rounds is like fueling your car, and nobody will congratulate you for that. We’ve raised multiple unannounced rounds  because people should give us props for scaling and building a business, and not for raising funds.

What matters is making the value clear. .”

In one of the meetings where LifeBank was looking to raise its first round, Temie said she just downloaded the company’s bank statement and sent it to the investors, saying this is what they’d been doing.

Talking about what’s working for LifeBank she says, the company thrives because it’s not obvious (niche-focused) so people underestimate it. More importantly, they put in the work on delivering value.

Expansion and hiring the right people

LifeBank is currently in “Two and half countries”, Temie won’t say  which country makes up  the half but she talks about what the company considers before expanding.

Every business knows that  people are its most prized possession and Temie talks about this.

“Anyone who comes to life bank is always fascinated by us, asking are you guys a cult?  We are deeply close and passionate.”

LifeBank doesn’t pay the most in terms of compensation but it pays attention to its culture. The hiring process is done by the different teams but Temie vets everyone who joins whether they care about the cause and are being relentless.

Also, to ensure team members keep growing, no one stays in the same job for more than 18 months, even if they have the same title, they must be doing something different.

On what to expect from LifeBank Temie says it has about 5 products it’s working on in its R&D lab, with a Stock Bank — critical medical consumables –being the most recent product.

LifeBank might have found a way around its initial hurdles but as it looks to keep working round the clock to solve the problems of healthcare in Africa, there’s more to come and Temie is aware of this.

The Building From Ground Up series is powered by the UK-Nigeria Tech Hub in partnership with TechCabal. For more information on the series, you can follow the UK-NG Tech Hub on Instagram, Twitter and LinkedIn.

Building from Ground Up
What does Elizabeth Tweedale know about team motivation in the COVID-19 era?
Damilare Dosunmu

Building from Ground Up
Shola Akinlade: Paystack’s maturity relied on a community of hard and smart workers
Alexander Onukwue