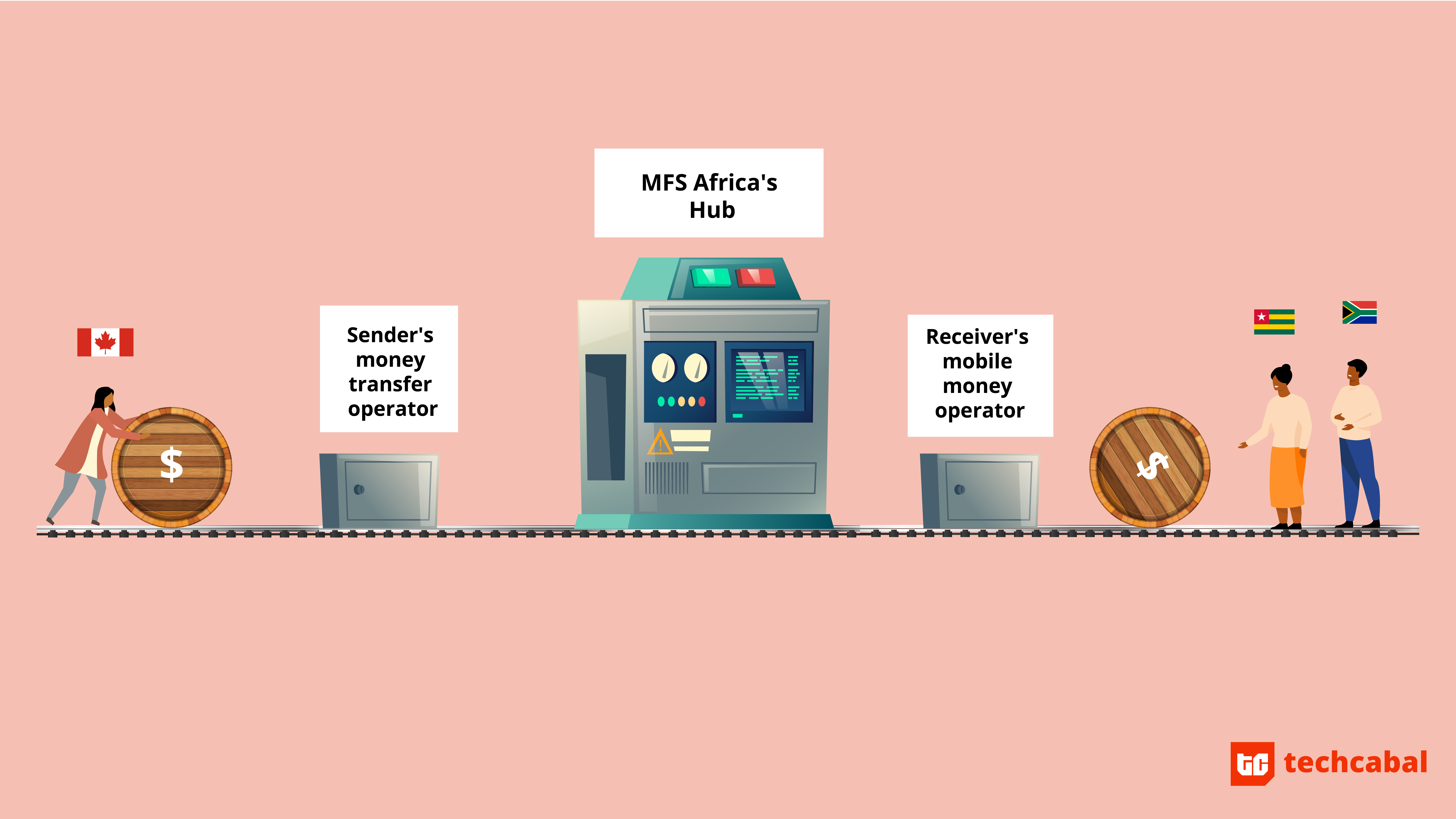 Dare Okoudjou and his MFS Africa team took another significant step this week on their mission to demystify mobile money transfer within, into and out of Africa.

They have added Xoom, Paypal’s money remittance service, to their network of international money transfer partners.

Xoom customers anywhere in the world can digitally send money to African markets where MFS Africa powers mobile money transfers, and the recipient will be credited within minutes.

These markets include Cameroon, Ghana, Rwanda, Uganda, Zambia, and Zimbabwe. They plan to scale availability to all 54 states on the continent.

Before this announcement, the big news about MFS Africa was their acquisition of Tanzania-based fintech Beyonic in June.

Under one roof, both companies are able to help over 200 million users transfer money digitally across 37 African countries irrespective of the users’ mobile money operators. The Beyonic side of the upgraded company will empower SMEs with tools for intra-country payments.

By adding another notable international money transfer company to a network that already boasts Moneygram and WorldRemit, MFS Africa stands out as one Africa’s most mature fintech infrastructure providers.

It is an impressive example of a private platform enabling interoperability in Africa’s mobile money space on a global scale.

MFS Africa’s sprawling fintech hub can significantly deepen financial inclusion across Africa. But how did they get here, and what image of Africa can we realistically expect as the company grows further?

From Benin with a burden

Okoudjou is based in South Africa and travels often around the continent. He’s from the Yoruba-speaking tribe in Benin Republic.

While growing up in the small West African nation, he remembers noticing that most of the things they bought or sold crossed borders with Nigeria. That meant money was often exchanged between residents in both countries, sometimes involving relatives sending money to loved ones on the other side of Seme.

More often than not, the money transfer process was a chore.

This lived experience would define MFS Africa’s mission when Okoudjou founded it in 2009.

Today, the company employs people from over 35 African nationalities, many of whom have migrated from their countries of birth but retain strong ties that require them to provide financial support back home.

And so for over a decade, MFS Africa’s work has been to fortify a single API structure for sending money across Africa.

The big picture is a network of fintech networks connected within and beyond Africa. The super network is to be built around an existing technology; the mobile phone.

MTN, Econet, Safaricom, Orange, Vodafone, and AirtelTigo are the top mobile money providers on the continent in the telecoms industry.

Due to sparse penetration of formal banking in East Africa, some of these started providing mobile money services to users by taking advantage of their mobile communications infrastructure.

Safaricom’s Mpesa, founded in March 2007, is the behemoth everyone knows thanks to their 99% share of the mobile money market in Kenya.

Across seven countries, it has over 430,000 agents. Over 41 million customers performed 12 billion transactions in 2019.

But Econet’s EcoCash is the big dog in Zimbabwe with 94% share. Orange leads in francophone Africa. MTN and AirtelTigo are the platforms of choice in Ghana.

How do you ensure users in any country using any of these platforms can safely send and receive money instantly at reasonable prices?

MFS Africa’s first step – and what Okoudjou now says is part of their secret sauce – was to undertake a deep understanding of the mobile money stack in each country.

With on-the-ground context, it was possible to then approach individual companies in each country to propose plugging into an API that would make it possible for the companies’ customers to transfer to each other with ease.

The company now has over 15 operators in its network of local mobile money providers. This includes Ecobank, Paga and a number of relatively lesser known firms that have digital systems for storing and transferring financial value.

For MFS Africa and the would-be partners, the upside was the potential for higher volumes. For customers, lowered costs.

Their global partnerships with money transfer providers outside of Africa, which started in 2017, is built on this local interoperability structure.

For each new global partner, all MFS Africa has to do is extend the established rails and plumbings, and it’s all systems go.

“What we’ve been doing over the last three years is to put the same network at the disposal of money transfer companies that are servicing the diaspora,” Okoudjou tells TechCabal in a chat from Cameroon.

Where companies like Xoom have previously shied away from Africa due to the fragmentation of markets, there is an appeal in seeing an already made bed to lie on. MFS Africa’s API doesn’t quite unite Africa to produce an India- or China-sized addressable market of a billion-plus people, but it creates an encouraging landscape similar to Mexico or Brazil, Okoudjou says.

“In the US they all think Africa is one country, we might as well not disappoint them,” he says, tongue-in-cheek. “We provide that one API that makes Africa look like one country.”

Though announced formally this week, Xoom’s integration on MFS Africa’s hub has been live for quite a while, according to Okoudjou.

Xoom customers in the US, UK or Europe who want to send money to relatives in, say, Ghana face a simple process. On Xoom, they select Ghana, type in the amount and a conversion will be done. Sender inputs the phone number or bank account of the recipient and sends.

MFS Africa handles the backend work of clarifying whether the owner of the phone number can receive money from a regulatory point of view, the currency to be received, what exchange rates apply, and all other such issues. Okoudjou estimates the process concludes in less than 45 seconds.

Remittances and much more

Most mobile money users in the 37 countries MFS Africa operates in will never hear of them. Unlike situations where a Paystack or Flutterwave brand asset is visible during transactions, MFS Africa doesn’t pop up on a sender or receiver’s checkout screen.

Yet, their work is fundamentally about removing the obstacles in the way of peer-to-peer transactions in Africa.

“We want to make sure there is always a digital pathway for a phone number to receive money in Africa.”

One in five people in Africa sends or receives remittances and it comprises 5% of GDP in about 15 countries on the continent.

But Okoudjou expects MFS Africa’s money transfer hub to show that its value to Africa is beyond remittances (remittances into Africa would have declined by 9% by the end of this year; a 6% decline is projected for 2021).

Relief efforts that need to target individual beneficiaries directly like conditional cash transfers to farmers or the rural poor is a use case that delights him. He expects freelancers on the continent to collect payments for their foreign gigs more easily.

“I don’t think it should be a monopoly. It’s too dangerous for all of this to be done by one company. We understand that it is critically important for the system to be de-risked. We expect other players.”

But to him, Africa is not a market where any player can realise value if too many players are involved, because then it would be a fragmented market.

He expects one or two players “probably creating different use cases” to set up similar structures to what they have.

Those players might choose to specialise in terms of use case or choose to serve a region, say a West Africa. But that would depend on there being a good business case for companies to pursue interoperability. The dynamics in mobile-money-enthusiastic Kenya differs from bank-accounts-based Nigeria or Angola.

Whatever happens competition-wise, MFS Africa wants to cover the 54 countries in Africa from Cairo to Cape Town to Monrovia and Djibouti. As with every network, strength lies in numbers and Okoudjou’s drive is to be able to make an even stronger argument to woo more Moneygrams and Xooms from every corner of the plant.

So the strategy is: intensify in Africa with local partners – as they have done with telco partnerships and strategic acquisitions, and extend to the world.

Okoudjou is nothing if not confident about their chances. “We’re kind of pretty good at executing. When we get half a chance, we tend to score.”