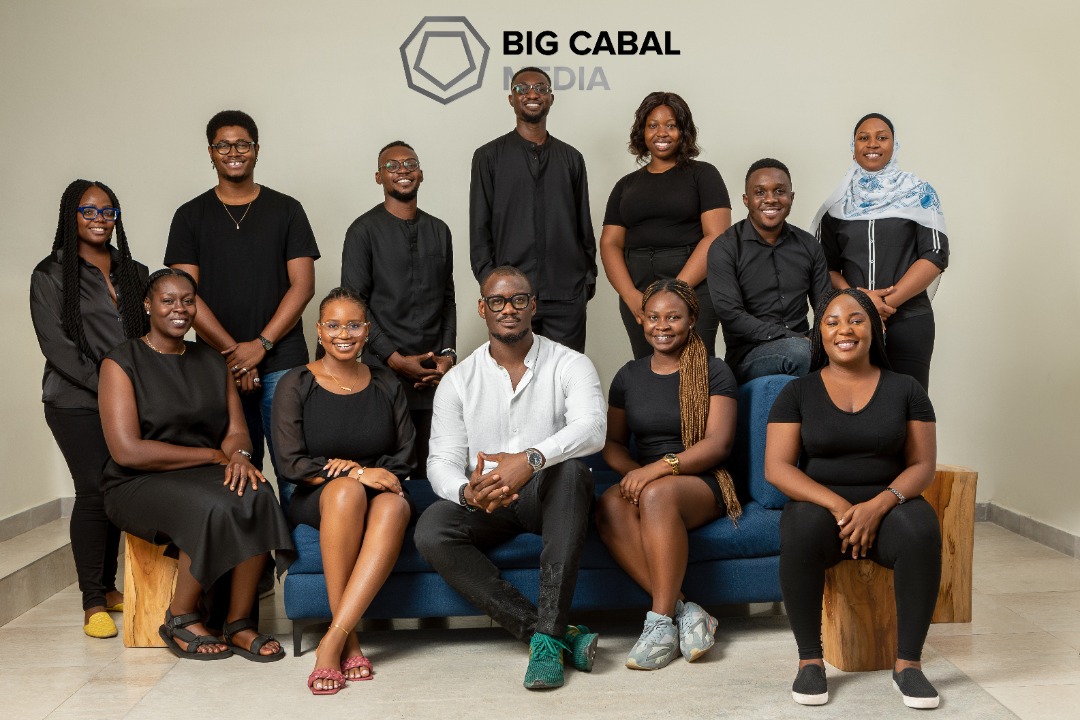 A group picture of the Big Cabal Media Leadership Team

Over decades, the news media landscape has changed dramatically. Checking for news online—whether through Google, social network sites, major newspapers, or local media websites—has become ubiquitous. The widespread use of smartphones also means the latest developments around the world are delivered to people instantaneously.

While digital media has connected people in ways never before possible, enabling users to remain informed and maintain relationships across time and distance, companies in the space have attracted a paltry amount of funding. In 2021, venture capital invested $115 million in digital media globally, a tenth of the $1.1billion it funded in 2015, but not much came to Africa. Digital newsrooms in Africa are more likely to receive story grants than business funding, with a few exceptions.

Today, one of such exceptions, Big Cabal Media (BCM), a leading African digital media company, has announced a $2.3 million Seed funding round, emphasising its commitment to keep building exciting and authoritative media products and brands. The new investment round saw participation from existing investors: Unicorn Capital Partners and Future Africa. New investors such as Mac Venture Capital and Luminate participated.

“We are delighted to support Big Cabal Media at a pivotal moment. Independent tech media like BCM are key pillars of society,” said Abdul Noormohamed, Vice-president Africa at Luminate.  “At Luminate, we are convinced that these digital media disruptors will continue to create engaging content and thereby contribute to the political and societal change we all want to see.”

Prior to this funding, with just over $600,000 raised in funding, BCM has grown to become one of the most exciting media and tech businesses in Africa. Its two major publications, TechCabal and Zikoko, reach over 30 million people monthly across platforms, with over 170,000 newsletter subscribers, and a 225% compound annual growth rate (CAGR) between 2018 and 2021.

Founded in 2013 by Bankole Oluwafemi, TechCabal started as a deliberate effort to cover the burgeoning Nigerian tech ecosystem. While the publication started out focusing just on the Nigerian startup space, it soon expanded its coverage to all of Africa. The publication covers startup fundraises, product launches, expansions, regulatory tussles, and stories of various players in the digital economy.

A year after TechCabal launched Seyi Taylor joined the company as co-founder and CEO, while Oluwafemi continued in his role as Editor-in-Chief. They continued to expand TechCabal’s coverage and scale up its operations. In 2016, the duo decided to try something different with the launch of Zikoko, a publication many likened to Buzzfeed at the time of its birth. Zikoko has grown from mostly publishing listicles and quizzes to sharing important stories on every aspect of Nigerians’ lives, earning it “Nigeria’s most viral publisher”  tagline.

Two years after the launch of Zikoko, Tomiwa Aladekomo joined the company, taking over as CEO. Aladekomo is an experienced media and marketing professional, who has worked in  a range of businesses across different sectors in both North America and Africa.

Over the next four years, Aladekomo focused on diversifying the company’s revenue streams. BCM had derived its income mostly through native advertising, but Aladekomo oversaw the build-out of an extensive suite of advertising products across publications. The company built out a substantial events business; launched the Cabal Creative content studio, which has served multiple Fortune 500 clients ranging from Google to Coca-Cola; and launched TC Insights, a digital economy consultancy business.

Under Aladekomo’s leadership, BCM has also embarked on ambitious projects like Jollof Road, an 80-day adventurous road trip across all mainland countries in West Africa; and Tech Women Lagos, a multi-sensory exhibition of 50 women in the Lagos technology ecosystem from different backgrounds.

“I joined BCM in 2018, brought on some really talented people, and we immediately kickstarted a period of experimentation,” Aladekomo said. “Our experiments encompassed editorial content and approaches,  monetisation and even company culture.”

Nine years after its launch, BCM which started as a tech blog has morphed into a media powerhouse. Its two publications, TechCabal and Zikoko are experts at creating content that hits the cultural nerve. They go beyond covering the scenes to creating agenda-setting editorial content, projects, and events. Cabal Creative and TC Insights  are also supporting hundreds of companies within Africa.

The company also boasts of a laudable alumni network, which includes Odunayo Eweniyi, CEO and co-founder of Fintech startup Piggyvest and First Check, a female-led, female-focused, angel fund and investor community; Osarumen Osamuyi, Partner Manager at Meta; Jola Ayeye, scriptwriter and co-host of  the I Said What I Said (ISWIS) podcast—one of the most listened to podcasts in Africa—and a host of others.  An indication of its investment in its employees.

“From documented reports and experience, too, very few people who work for media organisations are offered a competitive salary and we’d like to be the exception to the norm,” Aladekomo said. “The BCM model has been tested and proven. In 2021, we quadrupled our 2020 revenue, and over the last 4 years our CAGR is 225%.”

With this new funding, BCM plans to develop its product serving, staff, and audience. “We are expanding our video production by exploring docuseries and short films,” Aladekomo said. “We will be transforming our studio into a community hub for creatives, and introducing 3 new tech products, including the Zikoko app and Zikoko Memes 2.0, which first launched in 2020. We will also be building out new audiences while offering competitive wages.”

In the past 5 years, some notable fundraises by African digital media companies include Nigerian media company Stears Business’ $600,000 seed round in 2020 and Ghana’s OMG Digital $1.1m seed funding in 2017.  BCM’s progress over the years and recent fundraise is a noteworthy example of the possibilities and opportunities in Africa’s digital media sector.

Of the reported $4.3–$5 billion raised by African startups in 2021 whereby fintech received 53–63% of the volume, digital media companies are one of many sectors that have traditionally been overlooked in the conversation of tangible ventures.

“We’re proud to enter this chapter with Big Cabal Media, as we fully believe in its massive potential for further success, scale and global impact,” said Marlon Nichols, co-Founder and Managing General Partner at MaC Venture Capital. “Investing in Africa’s booming digital media sector aligns perfectly with MaC’s mission of supporting exceptional entrepreneurs building valuable technology companies that leverage shifts in cultural trends and behaviours. I have no doubt that BCM will seize this unique opportunity to continue leading conversations in culture and helping digital consumers access the information that matters most to them.”