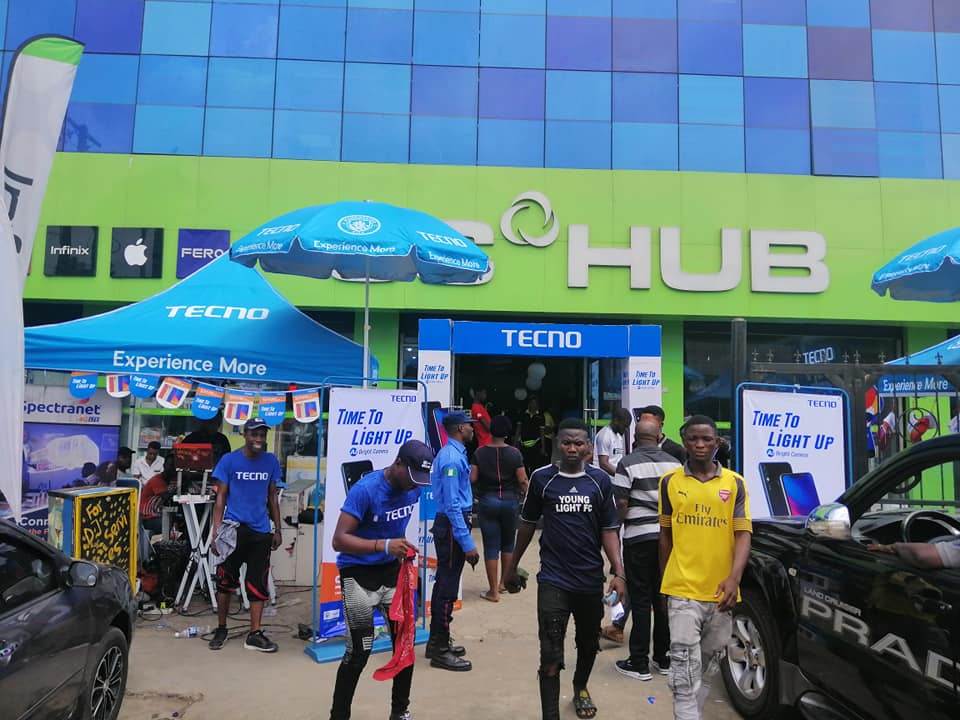 Ade is a young engineer working out of the famous Computer Village market in Ikeja, the capital of Lagos. He doesn’t earn a lot of money. But in the space of three months, he has switched between two new smartphones twice.

“Don’t mind him,” one of his cousins told me, “he bought the phones on credit from EasyBuy.” “Who will give him money to buy two phones?” his cousin teased.

“EasyBuy has helped my life,” Ade chips in.

According to a sales agent I met in Ikeja, EasyBuy started operations in January 2019. To get a loan, the app requests the user’s Bank Verification Number (BVN), valid ID card and their ATM information. While EasyBuy is an app, the service has a larger offline operation.

It has partnered with some smartphone retailers to advance device loans to buyers. One of its partners is 3CHub, the prominent offline retailer with shops in Ikeja and Lekki. The retailer is one of the biggest sellers of Transsion devices (Tecno, Itel and Infinix)

3CHub Ikeja outlet is perhaps its biggest. Daily, the ground floor of the building is packed with customers. Hundreds if not thousands of people walk through its doors every day to check out the latest devices and get the price of a device for a future purchase. Located right in Computer Village, the outlet is perfect for EasyBuy.

Its team of agents, over a dozen of them, wait close to doors, yelling “EasyBuy! EasyBuy!” at every customer that walks in. It’s a crude tactic that sometimes works.

“On a regular day,” says Ayomide* an EasyBuy sales agent, “around 200 people signup for loans daily.” And that’s just for the 3CHub outlet in Ikeja.

EasyBuy’s service loan service is actually called a “buy now, pay later.” According to the FIS World Payment Report 2020, buy-now-pay-later is a “payment option that delays full payment at checkout.”

It’s a flexible payment system that’s designed to encourage consumers to buy items they want especially when they don’t have enough money to cover the full cost at that point in time.

Buy-now-pay-later is designed to encourage consumerism; and for ecommerce, it could spur customers to actually complete orders rather than abandon their carts and not checkout.

EasyBuy is not the first buy-now-pay-later service in Nigeria. In 2018, Jumia introduced Jumia Flex for Nigerian customers. “Buy now, pay small small,” that was how Flex was described in 2018. For an ecommerce service looking to boost ecommerce users in Nigeria from less than 4%, Flex was a smart play.

But the service didn’t last and has since been discontinued.

Slot, a leading phone retailer, also offers a buy-now-pay-later service. A number of other merchants offer the service too, sometimes in different forms and to particular customers like salary earners.

However, EasyBuy’s case is an interesting one. As a standalone service, its pay later feature could be extended for other use cases including online and offline commerce.

The service is owned by a company called Transsnet Financial Nigeria, a company that is owned by Transsion Holdings. In addition to EasyBuy, Transsnet has an interest in other financial services.

On its website, Transsnet lists PalmPay as one of its portfolio companies. It also owns PalmCredit, a digital lending platform. It owns the lender through a subsidiary called New Edge Finance, and PalmCredit confirmed this in an email.

While all three services are separate, they collectively represent Transsion’s foray into the Nigerian financial system.

So far, only PalmPay has gained media attraction thanks to its loud $40 million seed funding round last November. For the other two companies have remained in stealth mode growing their reach offline.

PalmPay used the same gameplan. Representatives of the company made a lowkey attendance at TechCabal’s first ever townhall: the Fintech Townhall held in 2018. That was a full year before it gained media traction with the funding announcement.

EasyBuy seems to be doing the same. In its stealth mode, the Chinese-owned company is quickly becoming omnipresent in phone retail stores. Like PalmPay, it is utilising Transsion’s distribution systems and network for its own growth.

For starters, how the service uses people’s data is not compliant with Nigeria’s data protection regulation, the NDPR.

The NDPR mandates that user data should be stored locally, and if a user’s data will be transferred abroad, it requires the explicit permission of that user. EasyBuy does otherwise.

“The data that we collect from you may be transferred to, and stored at, a destination outside Nigeria,” the app’s terms reads. “It [user data] may also be processed by staff operating outside Nigeria, who work for us or for one of our suppliers.”

Instead of requesting for explicit user permission, EasyBuy said: “by submitting your personal data, you agree to the collection, transfer, storage or processing of your personal data in the manner set out above.”

For an app that is collecting sensitive information like users’ BVN number, the above terms and conditions puts user data at risk. EasyBuy did not respond to our request for comments.

Another part of EasyBuy’s terms says something interesting. EasyBuy will share user data “to other business entities, should we plan to merge with or be acquired by that business entity.”

It said this three times in the same section.

What does that mean?

It’s not clear. What is clear however is that EasyBuy has created a safeguard for any future acquisition. The way the terms were worded suggests that the app may not have been built to last as a standalone service.

It feels more like an offline growth tactic to onboard as many people as people before merging with a bigger entity. This theory gets stronger when the terms for PalmCredit and PalmPay are considered.

Almost like a carbon copy, PalmCredit said it will disclose user data should it merge or be acquired.

For PalmPay, nothing of such exists.

The theory here is that EasyBuy and PalmCredit could be merged under the PalmPay brand to offer their current services.

In an email response, PalmPay does not dispute this.

“PalmPay is not currently partnered with either of these two companies [EasyBuy and PalmCredit],” the company wrote in an email. “[but] We encourage you to watch this space for upcoming announcements of partnerships.”