Why Is Hardware Hard In Nigeria? 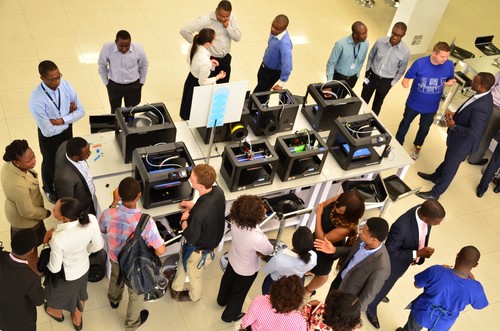 Every product you use most likely took years (or at least months) of design, prototyping and iteration before it was ready for you to purchase. That’s just the nature of the hardware business. To achieve a final product, a lot of creativity, money and an enabling structure/environment have to be in place. Unlike software solutions, time is also a major factor in hardware development because, well, physics.

What this tells us is that hardware – as we know it – is quite difficult to do. At least there are 3D printers and other equipment that lower the barrier for entry but even at that, it’s still a pretty high barrier.

Being that Nigeria is what it is and everything tends to get much harder here, the question then becomes: Why is it hard(er) to do hardware in Nigeria? To figure this out, I spoke to Chuma Asuzu, organizer of the Hardware Lagos meetups and founder of Involute, a 3D-printing-as-a-service startup; Chike Obinugwu, CEO/Founder of VNTS, a hardware startup that makes sockets that use existing electrical cables to transfer high-speed data; and other hardware stakeholders who would rather remain anonymous (it’s a maker thing, I heard).

From my conversations with these people, I grouped everything that hardware as a culture/tech touchpoint would require to thrive into three broad categories: Infrastructure, Innovation and Investment.

The problems in this area aren’t very different from those a software business would have to deal with and that typically means power and Internet. It’s a problem that needs to be solved if we are to make any meaningful headway in this hardware thing. On the Internet side, a lack of adequate broadband infrastructure and the resulting high cost of internet further increases that already high barrier for entry for people who are looking to build hardware products.

Speaking of infrastructure, the National Agency for Science and Engineering Infrastructure (NASENI) is the government body responsible for the establishment of a dynamic infrastructure base for “achieving home-initiated and home-sustained industrialization through the development of relevant processes, capital goods and equipment necessary for job creation, national economic well-being and progress.”

However, NASENI, like many government organisations, is not doing much in that regard. According to the NASENI website, the organisation (created in 1992) has been involved in “pioneering of projects on the manufacture of Solar Plant modules in Karshi – Abuja, local manufacture of Small Hydro Power (SHP) turbines and installation of same in each of the six geopolitical zones of the country, the design and production of Pole Mounted Transformers, and the design and production of wind turbine blades, etc.” Meh.

Still talking infrastructure but on the private sector front is the GE Lagos Garage. Operated by consultancy firm Neubridges and funded by General Electric (GE), this physical space in Victoria Island, Lagos runs a quarterly four-week program that trains makers and hardware founders on various aspects of the hardware game. Unfortunately, it is not open to the public (except to alumni).

There is also no dedicated space for makers compared to the many hubs and coworking spaces available for software development. “Hardware builds on craft,” says Chuma Asuzu. “There needs to be a physical space where makers and hardware entrepreneurs can go to design, prototype and collaborate with other makers. Unfortunately, there is nothing like that in Nigeria.”

Another hardware entrepreneur, who is designing a modular children’s toy that can be modified to teach kids different STEM subjects, says it’s not just enough to innovate, but to also be impact-driven. “They actually complement each if best outcomes is the goal,” she says. “Should you be designing an electric pole, for example, when you could be building a new way to power residential homes or building an antenna that reads weather patterns to predict floods? You can’t just ‘innovate’ for the sake of it.”

Although there may be no follow-through in terms of mentorship, networking and funding opportunities, GE’s Lagos Garage is actually making a dent, at least. Program alumni are welcome to continue to use the lab after exiting the program and that’s enough to make the key difference, says Chike Obinugwu, founder of VNTS and current participant in the current GE Lagos Garage cohort.

“It’s not their job to turn you into a [badass] entrepreneur,” says Chike, whose company makes sockets that use existing electric cables to transmit high-speed data to ensure total WiFi coverage. “Their job is to open your mind to the possibilities and give you the tools to actualize them in real-time. That’s invaluable.”

Investment is practically non-existent in Nigerian hardware – and it’s not just financial investment. Every single person I talked to made repeated efforts to point out the need for makerspaces – physical spaces with equipment and community where makers can go to tinker, design and create. At this time of writing this article, there aren’t any.

GRIT Systems and Elephab are the only hardware startups that I could find (although Chike did mention that his company got seed funding) that have raised funding and GE’s Lagos Garage was instrumental to the Elephab getting funded, perhaps bringing Chike’s point to the fore.

Beyond that there needs to be a makerspace/lab in Nigeria ASAP. Just like you have co-working spaces for software companies, makerspaces are crucial to building innovation, fostering a community and bringing the message of the hardware space to the larger ecosystem. At the moment, the closest thing to a makerspace in Nigeria is the GE Lagos Garage. We can take a cue from Gearbox in Nairobi – it was formed by four hubs and originally started out of iHub (it has it’s own space now). The government can partner with private sector stakeholders to set up well-equipped spaces for makers.

The hardware community also needs to come together to consolidate efforts. Hobbyists, entrepreneurs, artisans, and business people playing in the hardware sector need to engage each other and map a way forward. The various pockets of activity across the value chain need to be harmonized and issues like skills development and investor bias tackled with a unifying purpose.

US-based Bolt is the first hardware-focused VC in the world. We may not have the capacity for something like that at this time but at least we can start to think about it. The hardware space needs a critical injection of funding, mentorship, access to market, among other things.

While the Buhari government has the right intentions with its local content policy, it’s kind of redundant because if people can’t access the market, innovate and collaborate with their community, then there will be no local content to start with. Chike makes a great point about giving Nigerian companies sourcing contracts if some reason the required product cannot be made here in Nigeria. The government can also set up policies that encourage big tech companies like Google, Microsoft and Facebook to work with Nigerian hardware businesses (tax rebates, maybe?) in equipment manufacture and/or by setting up fabrication labs (IBM’s innovation lab comes to mind). There are many, many ways the government can stimulate the space and play a part in building Nigeria’s hardware ecosystem. These guys are already doing the work, but there is much more to do.