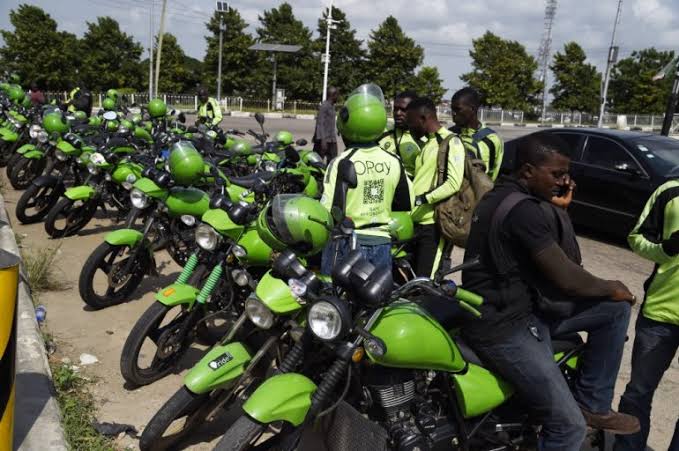 At the Yaba bus stop in Lagos, eager merchants are sweeping and spreading out their day’s wares. The bustle is swelling. Eager motorcyclists are calling out to hurried pedestrians from a makeshift bike park when I notice an ORide motorcyclist zigzagging towards the park slowly. He wrestles his motorcycle with a disheveled man who is apparently a member of one of the many transport unions in Lagos.  He’s asking the bike rider for tickets and, flustered, a heated argument ensues between the two with the informal bike riders chipping in.

For some months now, bike-hailing operators like ORide and transport unions in Lagos have been at loggerheads over their activities in the state.

In the last couple of weeks, however, the operators are now contending with the  Lagos State Environmental and Special Offences Enforcement Unit (Taskforce) an arm of the Nigerian Police in Lagos, who have embarked on bike seizures across the state in the last few weeks. According to multiple sources over 50 bikes from ORide and more than 30 bikes from MAX have been impounded.

There were reports of assault on bike riders particularly in the Igando area of Lagos. A bike rider working with one of the operators who would rather not be named was shot in the neck and at the time, was battling to live at the Intensive Care Unit of a hospital in the area. He has since come out of ICU and is reportedly stable.

In a phone call with TechCabal, Bala Elkana, the Lagos police spokesman, confirmed the seizures. He shared that over 3,000 bikes have been impounded over the last couple of months. Elkana says the police has been going after bikers who break traffic laws. This is an obvious issue since Lagos traffic laws make it illegal for motorbikes below 200 cylinder capacity (CC) to operate as passenger transport. Traffic laws have also banned motorbikes from operating on over 400 routes in the state. But these laws aren’t new or recent; restrictive traffic regulations against bikes have been in place since 2012. Bike-hailing startups also emerged in this regulatory uncertainty, vying with the government to develop the right regulatory framework. So far nothing has happened. Yet these companies have operated with almost no hassles from the police. Until now.

So why is the police going after them now? Importantly too, the challenge from the police comes just days after bike-hailing companies got a ticketing agreement from transport unions in Lagos.

The formal operators’ tussle with the transport unions in Lagos which has been ongoing for a few years seemed to come to an amicable stance three days ago with a new agreement between the operators and the National Union of Road Transport Workers (NURTW) and Road Transport Employers’ Association of Nigeria (RTEAN). For a flat fee of  ₦500 ($1.38) riders affiliated with bike-hailing companies will purchase a daily ticket that allows them to operate anywhere in the state.  This was a downward negotiation from a proposed ₦1,000 ($2.75 ) daily levy. The NURTW and RTEAN will each receive ₦200 ($0.55), while ₦100 ($0.28) will go to the local government where the ticket was sold.

The unions have said the levies are a result of the sector being inundated by foreign companies, an accusation that is half true. Two of the major companies operating in Lagos are indeed foreign but there are other locally owned operators also operating in the state.

“What is the Chinese man looking for on the road if he is selling or distributing the motorbikes?” Dr. J. O. Spencer, the NURTW’s head of special duties asked when he spoke to TechCabal last month.

“Why should he be involved in the domestic affairs of your fellow brothers?”

According to Dr. Spencer, the companies are competing with poorer informal bike operators who need employment. A percentage of these informal riders are not Nigerians.

With the unions seemingly sorted out, the state government is still cap in hand with a proposed annual  ₦25 million licensing fee still in the works for the formal operators. The fee was proposed in July and sparked outrage over the government’s failure to provide enabling environments for the growth of the sector. Added to the levies which amount to ₦182.5 million ($501,935) per 1,000 bikers per annum, operators like ORide and Gokada and MAX will be paying nearly $600,000 in levies and licenses every year to be able to operate in Lagos.

Bike hailing operators like ORide and Gokada agree that they are operating under unclear laws but their efforts have remained targeted at agreeing on regulation with the government and bringing much-needed sanity and security into the sector.

Contrary to reports that only the bike hailing operators are being targeted in the new wave, police spokesperson Elkana says bikes from both formal and informal operators have been seized in the fresh campaign against traffic rule defaulters.

One of the operators whom TechCabal spoke to, as well as a handful of riders says the response to the seizures has been to “talk to the new commissioner of police”.