Digital Nomads: The Solo Wanderer traveling across Africa to find what connects us 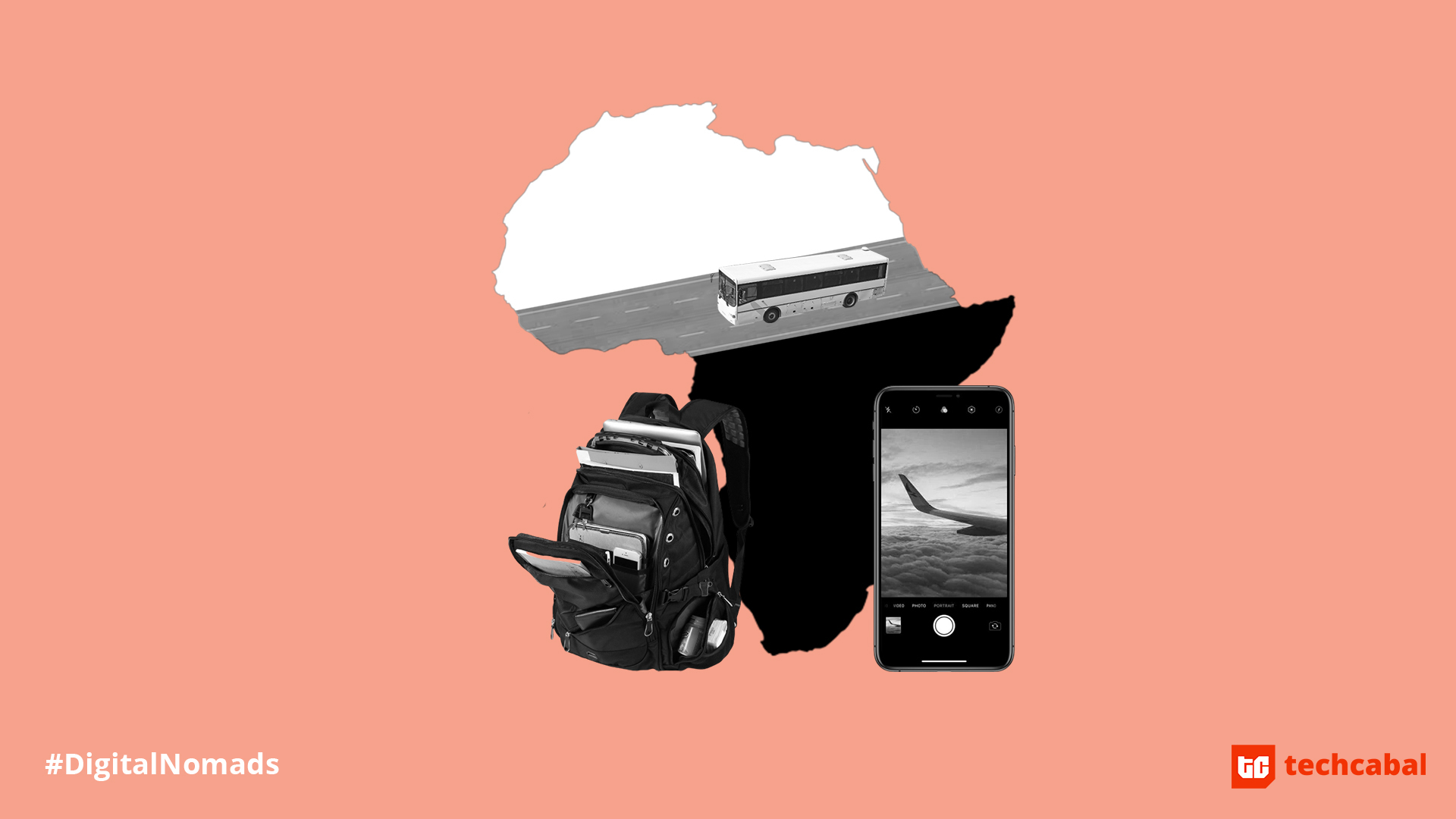 In 2017, Katchie Nzama, more popularly known as The Solo Wanderer, backpacked from Africa’s Northernmost point to its Southernmost point on her own. It took her six months to travel across 21 countries in a trip she tagged #BreakingBorders.

She has since expanded her travel repertoire, having visited 35 of Africa’s 54 countries.

Her life sometimes sounds like one big vacation and she has stories for days. She talks about the beauty of Tunisia and how the country hasn’t recovered from the Arab Spring. In another breath, she talks about being in Sierra Leone during the 2017 mudslide.

Yet, way before all these travels, she talks about growing up in South Africa.

“I grew up in Johannesburg and I always traveled growing up. But my curiosity about traveling through Africa started in high school when a Nigerian student joined our class during the year. He spoke in a different accent from all of us and I was so curious about Nigeria where he came from.”

But there was no dramatic punt across the continent yet. Instead, after high school, Nzama worked at an event planning company as a marketing coordinator.

“I hated working in an office, it was the most horrible life ever. I got tired one day and I didn’t want to do it anymore. I wanted to go from Cape to Cairo. So I left my job to start a travel blog, something that was unheard of for Africans.”

While African travel has become fairly popular in the last few years, the idea of an African travel blogger in May 2014 must have sounded eccentric. The initial idea for the blog was simple: to visit some of the countries her schoolmates came from and try to understand their culture.

“From May until October 2014, all I did was use Youtube to learn how to use social media. I needed to know how to get paid to travel. I watched and learned about how the kids on other continents could do what they were doing.”

Nzama’s thinking about her blog in 2014: I wanted to build a blog about discovering Africa in affordable ways, promoting community based travel and finding ways for tourism to benefit communities.

Nzama says that tourism across the African continent benefits everybody but the immediate community.

“In Southern Africa and East Africa, when you look at major conversations, the communities are excluded. Now it’s too expensive for you to visit a gamepark even if it’s in your community.”

“Community based tourism gives humanity to Africans. Now we know that when you learn about an African culture or tradition, you’re learning it from an African perspective. It was another reason why I wanted to travel.”

Nzama has the passion of a prophet, as she speaks about getting tired of the Western perspective and starting a movement where “one day tourism starts benefitting us.” Her passion for community based tourism is why she is indignant when I ask her if she was scared of leaving her day job in South Africa.

The Western perspective she rails against suggests that people traveling across Africa need to be cautious and careful.

Nzama is confident and assured for someone who says she got where she is today by winging it and sometimes making it up on the fly.

Nzama’s note: In 2014 when I started and was learning how to use the internet and social media, I did not know what I was trying to make out of it. I didn’t know if I could get paid to travel. I had a little bit of money, but I needed to understand how to travel without spending too much money.

When you need to travel without having a ton of money, you get innovative and you discover new things, like couchsurfing. Couchsurfing is a term I first heard from Olumide, the digital nomad in Bali.

“Couchsurfing is basically a community of travelers who are broke and like traveling. Some of them don’t get to travel but because they get to host travels, they travel vicariously through them.”

The Couchsurfing platform allows you to find a village you would like to visit and connect you with a list of people who live there.

You then reach out to them and ask if you can sleep on their couch while you travel.

“I did a lot of couchsurfing across the continent because I didn’t have money and also because if you have to go to remote villages, there won’t be any hotels.

So this was one way to find strangers and turn them into brothers, sisters and friends.”

My note: couchsurfing is more popular in villages in Africa than the cities.

As interesting as it all sounds, the plan wasn’t to constantly depend on her own resources and the goodwill of strangers to have these experiences. People often say that good content must pay for itself, it turns out that adventure must also pay for itself also.

Nzama’s thoughts on content: I started building a brand for traveling across Africa and creating content around it. Being online brought me more money: I put authentic content online and people enjoy that. If it’s ugly, it’s ugly, I’m not trying to make it look pretty.

With authentic content, it led to more people wanting to pay me to travel across the continent.

Is there any sort of formula to what she does? Nzama doesn’t think so. “There is no formula, I’m making this up as we go and I would say it’s working because right now we’re working on my travel TV show.”

On her TV show, she’ll share some of her most memorable travel experiences, and for someone who’s been to 35 countries, she has a trove of experiences.

One of those experiences is getting evacuated from Sierra Leone three years ago after deadly mudslides.

Yet she speaks of Sierra Leone wistfully.

“I was in Segbeya, a village in Northern Sierra Leone that’s so remote even the UN and the USAID do not go there.

But I was determined to go because I wanted to see Sonfon Lake. Most people in West Africa have never heard of it and it means nothing to them. Yet, Sonfon Lake is a cultural landmark for Segbeya village as they believe their ancestors live underneath the water. This belief is the same as in my village in Venda where there’s Fundudzi lake.”

These are the kind of connections she wants to explore and the heritage that make us so similar.

Nzama’s tip to finding a local guide in remote villages: I go to a drinking hall and you’ll always be sure to find someone who can speak a bit of English. I buy them a beer and that’s how I find myself a local guide.

To document her experiences across countries, technology does some heavy lifting.

“I buy SIM cards in whatever country I am in. It is the easiest and most affordable way to connect because you buy the local line and you’re set up.”

Even with a SIM Card and a smartphone, you’re still sure to run into Internet issues every now and then.

“There are countries where the internet connection has been terrible, like Mauritania. I think I was only able to get a couple of tweets out, without images.”

“In Sierra Leone, I was too overwhelmed to share anything.”

Yet when I ask about which of the countries she had better tech experiences, she’s reluctant to compare countries. She would rather speak about them individually.

“Kenya is the easiest country for me to go to. When there was no corona, I could get bored on a Thursday and fly to Nairobi. I love the ease of going to Kenya, I wish the rest of Africa could be like that.”

Kenya’s visa on arrival policy is popular with tourists and the same policy also works in Uganda. It is one of the ways countries are encouraging tourists to visit.

But beyond convenience, Nzama says there are parts of Africa she has fallen in love with.

“Tunisia was devastated by terrorism and it was how I understood that terrorism can bring a country to its knees. It made Tunisia cheap for tourists but the people were starving.

“All the hotels were deserted yet there was still a lot of beauty. I’ve been in the Mediterranean and learned that it is really shallow and you could walk quite far before you actually go underneath the ocean.”

In the end, you get the sense that Nzama is emotionally invested in every country she’s been to and try as I may, I cannot get her to do a rating of her favorite countries.

She even has a kind word for Mauritania, a country she found difficult. “Mauritania was the hardest country ever but it is one of the top countries that I would like to go back to.”

As she says, every country presents something different.

“Traveling across Africa is difficult because of transport. In West Africa there’s no infrastructure, there are no roads.

“Traveling across Africa made me realise Google maps doesn’t work in Africa.

You could get an estimated time for a trip of four hours and twenty hours later, you’re still not there.”