South Africa and Egypt are sending more satellites into orbit 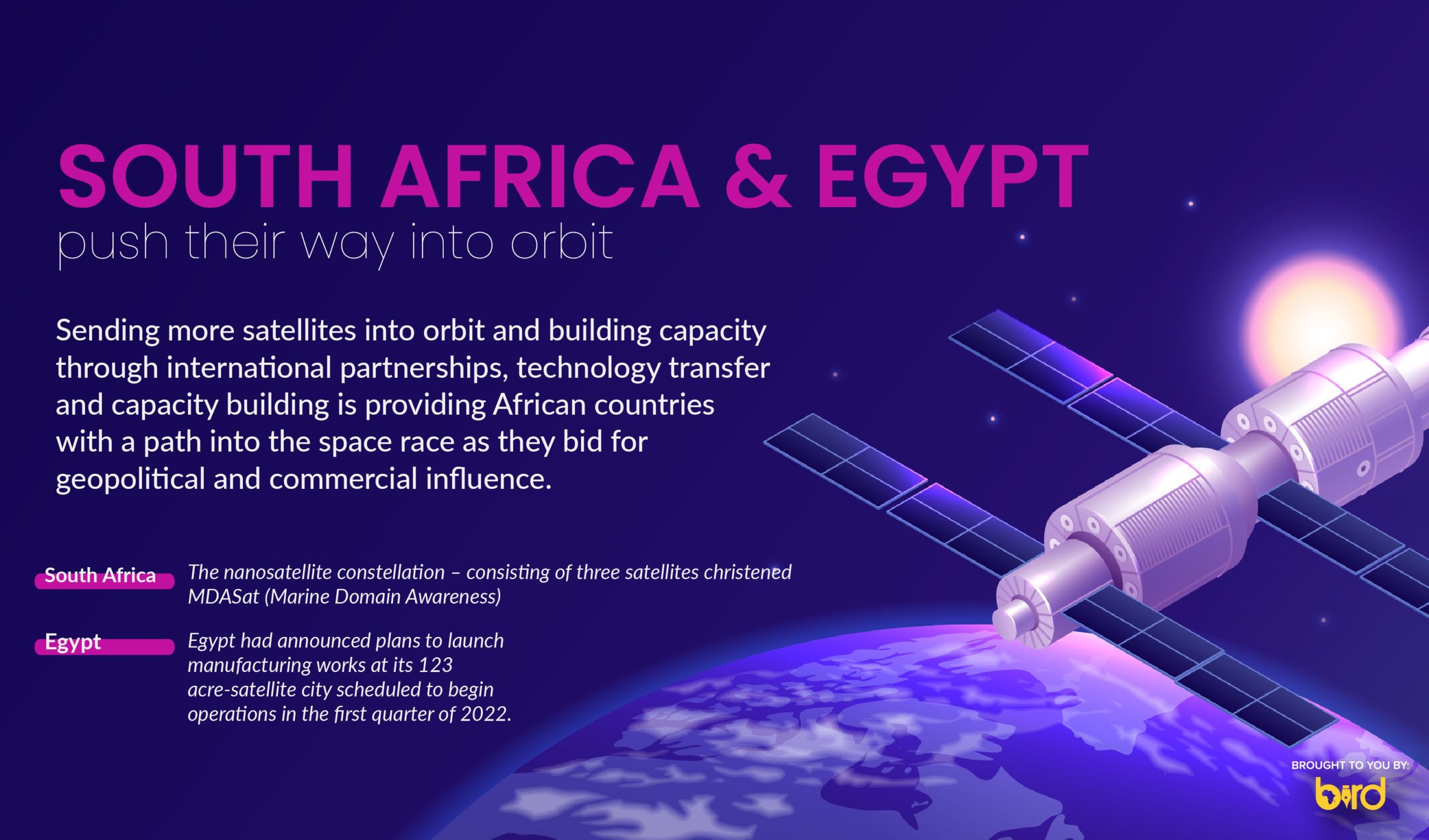 Sending more satellites into orbit and building capacity through international partnerships, technology transfer and capacity building is providing African countries with a path into the space race as they bid for geopolitical and commercial influence.

This story was contributed to TechCabal by Conrad Onyango/bird

As Africa’s space ambitions grow, South Africa and Egypt are primed to join the club of space-faring nations thanks to increased investments in exploration projects.

The two African countries have been listed among emerging global space-faring powers competing to challenge the status quo of the world’s space sector.

“New space-faring powers will emerge as more economies begin to see opportunities to expand both geopolitical and commercial influence in this arena,” according to a new report by World Economic Forum.

The ‘Global Risks Report 2022,’ lists Egypt and South Africa alongside Middle East’s Iran, Turkey, Saudi Arabia, and the United Arab Emirates seeking independence in developing and launching their own satellites as well as Argentina, Brazil, and Mexico in Latin America and Australia, Indonesia, Malaysia, New Zealand, South Korea and Vietnam in the Asia-Pacific region.

Increased private sector investment over the last decade has led to rising competition and the “crowding” of the sector, with the potential to disrupt the traditional incumbents’ control in delivering satellite services. This is good news for countries keen to join the space race.

“Some governments are encouraging private space activity to further national “territorial” claims or to foster the development of high-value jobs, especially in the zone of Low Earth Orbit (LEO) or Medium Earth Orbit (MEO), as well as enhancing their military or defense-oriented presence,” says the report.

Space in Africa, a media, analytics, and consulting firm, projects the continent’s space market will exceed 10 billion US dollars in value by 2024 on the back of rising investments.

Over the last few years, Africa’s space industry has been very busy with a number of countries sending satellites-including those designed and developed on the continent- into space.

Earlier in January, South Africa’s Cape Peninsula University of Technology, launched its third satellite mission into space, on a rocket launched from the Cape Canaveral rocket launch site in Florida in the US.

The nanosatellite constellation – consisting of three satellites christened MDASat (Marine Domain Awareness) – has been designed to collect critical data to enhance the security and protection of South African marine resources.

South Africa is also set to benefit from hosting and being involved in, the world’s largest radio telescope project – the Square Kilometer Array (SKA). Construction of the mega-project is expected to start in earnest in the Karoo, a semi-desert natural region of the country, in 2022.

The intergovernmental project hosted in South Africa and Australia, as well as other parts of Africa, is billed as the most advanced radio telescope network in the world.

With the ability to collect information from one collecting area of a square kilometre (a million square meters), the South African Radio Astronomy Observatory (SARAO) says makes it “50 times more sensitive” and 10 000 times faster than existing radio telescopes.

In September 2021, Egypt had announced plans to launch manufacturing works at its 123 acre-satellite city scheduled to begin operations in the first quarter of 2022.

The satellite city is expected to aid in research, education, and local designing and manufacturing of satellites.

The 2021 edition of the Africa Space Industry Annual Report shows 125 new satellites have been lined up for development in 23 African countries by 2025.

Last year, 10 countries more countries forayed into space science and are working on developing their first satellite, according to the report.

So far, 13 African countries have already sent satellites into the earth’s orbit over the last two decades.