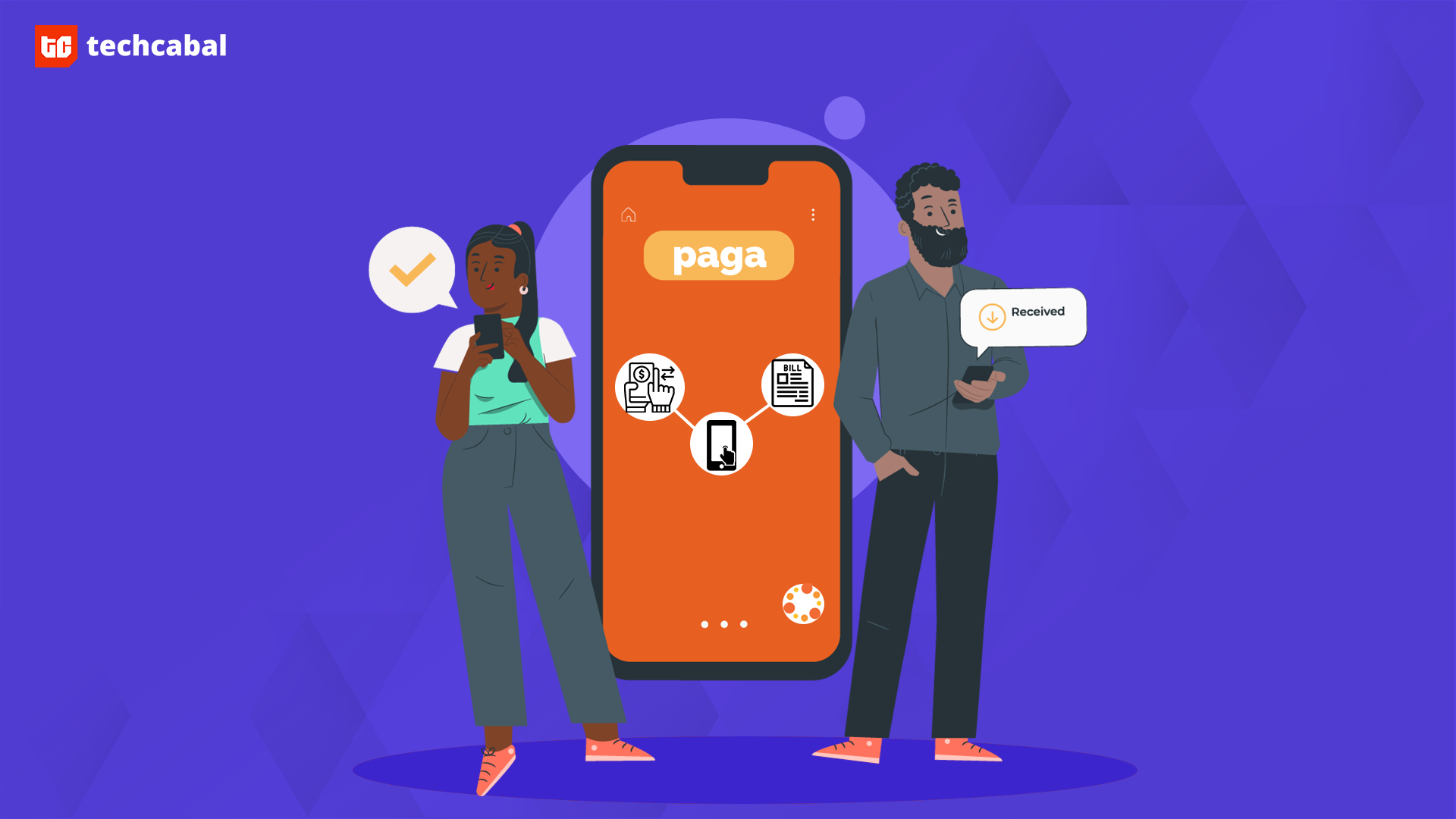 During a chat at the company’s head office in Yaba, a suburb on Lagos Mainland once touted as Nigeria’s Silicon Valley, CEO Tayo Oviosu recalls the epiphany moment that led to the founding of Paga back in April 2009.

The Stanford-educated Oviosu had just returned to the country he was born and raised in but left at age 16 and wanted to venture into the world of entrepreneurship.

Opportunities in the private sector at the time were immense. Nigeria’s central bank was pushing for a cashless economy but banks were slow to innovate. After considering several ideas for a couple of months, Oviosu came up with what is now Paga.

“Back then, a lot of transactions in Nigeria were largely cash-dependent which was inefficient for both businesses and individuals,” he said. “Paga was born out of my own frustration with carrying cash around. The idea was simple—there had to be a way to make payments simpler.”

Oviosu, aiming to build the “Paypal for Africa”, then teamed up with Jay Alabraba to launch a mobile payments company named Paga, a Spanish word that means “to pay”.

Paga was arguably the first fintech company in Nigeria to popularise mobile money among the unbanked. At the time it was launched, the main players bridging payments with mobile technology in Nigeria were Interswitch, eTranzact, and SystemSpec’s Remita.

Thirteen years on, Paga—now a UK-headquartered Group—has amassed more than 19 million unique users through its consumer channel and agent network of over 120,000 agents across Nigeria. Since the company began commercial operations in 2012, it’s processed over $10 billion ( ₦4 trillion).

In an interview with TechCabal, Oviosu reflects on Paga’s evolution and growth and talks about product innovation, global expansion, and the next phase for both Paga and the fintech landscape in Africa.

Oviosu’s goal for Paga was to build a platform that simplified payments, digitised cash transactions, and delivered financial services to the mass market. He started with a team of 8, a figure that’s grown to more than 100.

Paga’s initial set of products was focused on providing more people access to traditional banking services – especially sending and receiving money – through mobile phones and physical agents equipped with POS devices. At an agent outlet, customers show up without an account number and for a fee, are able to send and receive money to anyone.

In December 2019, after the introduction of national identity numbers (NIN) and bank verification numbers (BVN), Paga launched its consumer direct product that allowed users to create mobile accounts and used wallets for transactions through the mobile app and USSD.

According to Oviosu, more than 3.7 million wallets have been created on Paga since then while the company plans to roll out physical and virtual cards later this year.

Over the years, Paga’s total processed value (TPV) has grown exponentially. While it took the company 99 months to get to its first ₦2 trillion, Oviosu revealed it took 22 months to reach the next ₦2 trillion.

In 2021, Paga crossed the ₦1 trillion mark in annual TPV for the first time—hitting ₦1.2 trillion—and is on track to reach ₦2 trillion this year alone, according to the CEO.

As part of its consumer payments play, Paga in February announced its addition as a payment provider for Twitter Tips, a feature that enables Twitter users to either send or receive by simply linking their preferred third-party payment service providers to their profiles.

Beyond consumer payments, however, Paga is now a fintech behemoth helping merchants digitise payments (under a separate brand called Doroki) and opening up its infrastructure for third-party companies to easily offer financial services.

Doroki allows merchants to accept cards and other forms of digital payments via point-of-sale (POS) terminals and mobile POS handheld devices, making it easy for them to get paid and track inventory while enabling them to provide other value-added financial services to customers.

While Covid-19 has increased the use of technology in payments and money transfers in Africa, the purchase and onboarding cost of POS devices is unaffordable for most merchants.

Paga announced last year a partnership with Untapped Global to provide financing that would lower the cost of entry for merchants, with payments recovered from the revenues earned on the devices.

After a successful pilot programme, which saw 2,000 businesses provided with financed POS devices, Oviosu revealed that more than 6,000 sellers currently now use Doroki to collect payments in the wake of the commercial launch last November.

“We’re trying to build an ecosystem for the consumer to conveniently make payments and for SMEs to manage their businesses and do payrolls,” Oviosu said.

From merely enabling Nigerians (individuals and businesses) to make and receive payments with ease, the Paga group now offers open-source APIs to companies for building products.

Paga’s platform-as-a-service (PaaS) business started with the acquisition of a remittance license in 2018, after which it allowed companies like Western Union and Wise to terminate remittances to accounts in Nigeria.

In 2021, Paga opened up its platform to more businesses through Collect APIs, which more than 200 businesses currently use.

Paga’s open wallet is available to any third-party developer. “We don’t want to compete with you building your wealth management app; we’ll help you,” the CEO said, adding that its recent integration with Flutterwave is built around the same APIs.

In effect, Paga has extended beyond the payments business to becoming a product infrastructure company, which entails entering into partnerships with tech companies in similar and adjacent sectors.

Paga’s go-to-market strategy in Nigeria has been a hybrid approach that combines offline and online channels. “A majority of the population may not be tech-savvy and smartphone penetration is still low,” Oviosu said.

Starting out, Paga relied on a retail network of shops and agents that consumers can visit for in-person transactions. “To scale in Africa, you need a hybrid (digital and physical) approach. If you don’t want or know how to use the technology, you can go to agents and still deal in [physical] cash, but the agent can do the digital.”

Oviosu acknowledges that in Nigeria, physical cash is very much still a thing and won’t go away anytime soon. Smartphone penetration has also not improved significantly. Hence, the company “still needs on ramps & off ramps to cash”.

Although the share of Paga’s total transactions being done via agents has declined in recent years.

“Three years ago, agents accounted for about 90% of our transactions. Last year, that figure fell to 60%, an indication that other channels/parts of the business are growing fast.”

What next for Paga? Expansion

“The vision is still the same—to solve payments for individuals and businesses,” Oviosu said. “We’ve always taken an open approach. It’s not a closed circle.”

On what an “open approach” means, the CEO explained that with Paga, users can link their several bank accounts, debit cards, and mobile money wallets from other providers.

In addition, anybody—including non-Paga account holders—can pay a Doroki merchant. “You can walk into a store and pay with your card, scan a QR code, or make payments using USSD from any bank.”

While the vision has been steady, the ambition and scope of Paga have grown over time.

Alongside product expansion, Paga has in its sight a global expansion starting with Ethiopia. In January 2020, it acquired Apposit, an Ethiopian software development company that is planned to be its vehicle for entry into East Africa and Latin America. Last month, Paga announced an official launch in the Horn of Africa country.

Because there are local nuances to be aware of, Paga has a local team of at least 50 in Ethiopia. The payments platform was also built to be multilingual, so switching from one language to another is easy.

As per funding the expansion plans, Oviosu revealed Paga, which has secured $35 million to date—with the backing of investors such as Jim O’Neill and Tim Draper—is looking to raise additional capital.

“The first couple of years of Paga was building infrastructure where it didn’t exist. We built a hybrid payment infrastructure for the online and offline customer,” the CEO said.

“New companies don’t need to repeat that. I expect to see more of them focusing on niche markets that can scale, leveraging existing platforms through open-source APIs.”

As for Paga, the vision remains the same: getting up to one billion people using its platform to access and use money, according to Oviosu.