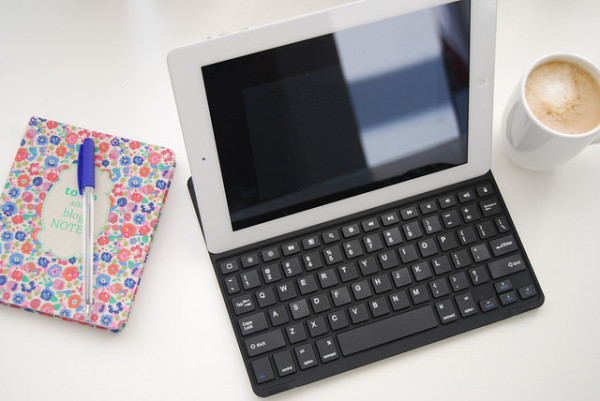 Just under 4 months ago, I got an iPad Air 2. I bought it primarily, as a remote control for my digital audio workstation, Ableton Live, via TouchOSC (so I could make changes to my audio projects without having to interact with a glass trackpad and a keyboard). Secondly, as a makeshift Kindle (for those moments when I’m waiting for people, and I need to read). Third, as a mobile external monitor (crazy, I know), via Air Display. Perfect setup for a burgeoning film score composer, who didn’t want to haul heavy monitors (or any equipment for that matter), to clients’ offices or meetings.

I noticed that as time went on, I began to take my 13” Retina MacBook Pro out in public, less and less. This was mostly for security reasons – Nigeria, sigh – but also because a good number of the things I used to do on my laptop could now be done on iPad with very little trade off. The iPad’s tri-core A8X chip kept up with me marvelously, from keeping more than 30 tabs open on Safari, to staying connected to the TechCabal newsroom via Slack, to Google Drive, Docs and Sheets, to putting down musical ideas in Garageband, to reading saved pages on Instapaper, to listening to Skrillex’ music via Soundcloud, to playing Asphalt 8 and Mortal Kombat X in between work sessions.

As a tech geek, and a hobbyist programmer, I’m mildly obsessed with ergonomics, and I found I got tired really quick when I had to write – mostly because of the lack of an actual keyboard. This became increasingly apparent when I began writing for TechCabal a few weeks ago. Typing on glass is fine for social media, and note taking, but for 600-1000 word posts?

So, Friday morning, I got a bluetooth keyboard, to fix that. Or so I thought.

I’ll start by saying that the bluetooth keyboard is pretty well designed, featuring a similar layout to my Macbook keyboard. Excellent battery life (weeks, not hours, I read somewhere), zero lag, impressive key structure, a clip, on which I can place the iPad, effectively turning it into a 9.7 inch laptop.

My first trial was a TC article, at around 9:30am. Turned the iPad on and paired the keyboard in seconds. They acted like long lost lovers, sharing keystrokes and stuff. I opened up Google Drive, and then Google Docs, to begin pouring my thoughts to ‘paper’ (or screen, depending on how you look at it).

My first gripe with it was the small size, which is largely a function of the size of the iPad itself, but I have rather large fingers, and even my 13-inch laptop sometimes doesn’t have enough key spacing to make typing as comfortable as I’d prefer, and this is even worse. Because of the size, there’s no key travel, and I found myself over-reaching sometimes, and then having to touch the screen to correct the many mistakes.

Muscle memory is a hard thing to shake off. I’ve been typing on a particular size of keyboard for so long, that anything smaller doesn’t make sense anymore.

In the same vein, iOS9 wasn’t built for keyboard input, so I found myself having to break my flow, lift my hands to the screen to move the cursor, select text, et cetera, which is why I think touchscreen laptops are some of the most illogical devices ever created, born out of a desire to show off, rather than a genuine consumer need.

On more than one occasion, I subconsciously reached for a trackpad, to perform actions like text selection, and switching between apps, but to my dismay, all I felt was the cold, unresponsive surface of the bluetooth keyboard.

Based on my experience so far, I think using a keyboard with an iPad is physically possible, but not very useful, in the grand scheme of things. Today, I caught myself more than once ignoring the keyboard in front of me, and typing on the glass touchscreen I sought to avoid initially. Does this mean it’s a completely bad idea? No. But I think for most people, it requires far too much ‘getting used to’, to make it worthwhile, at least in the short term.

When typing anything, I guess it’s best to opt for an actual keyboard, in tandem with an operating system, like OSX, optimised for such. iPad, and iOS by extension, was never designed to accommodate a keyboard, because for a lot of the things it’s useful for, it doesn’t need one.

I reckon Apple called this one right from the start. It’s just not worth the stress.