TechCabal Daily – Looking out for the kids 🕵
Get the most comprehensive roundup of technology news on the continent, delivered to your inbox every weekday at 7am WAT

While the team at Zoom were working hard to ensure people use the tool for more meetings, someone else created a way to opt out of these meetings by faking distractions. Meet Zoom Escaper, a tool that helps you leave Zoom meetings by feeding the sound of dogs, construction and even babies crying into your mic.

I hope my boss isn’t reading this.

Instagram and Google are looking out for the kids

Different social apps are ramping up efforts to make the internet a safer place for kids. In 2015, YouTube created a new app, YouTube for kids, to protect kids from adult content and harassment. Yesterday, Instagram announced a few features to make instagram safer for kids.

Currently, Instagram requires users to be at least 13 years old. But people lie about their ages so it is possible that a chat going on right now is between a 70-year old man and a 10-year old girl who don’t know each other.

To reduce the number of incidents like this instagram is introducing a new feature that prevents adults from sending messages to people under 18 who don’t follow them.

In addition, to prevent conversations between adults and teens, Instagram will start using reminders or safety notices to encourage teenagers to be careful when engaging in conversations with strangers.

Read more: On Instagram, suspicious adults will no longer be able to send DMs to teenagers

According to Google, two in five parents are not confident in talking about different tech-related topics with the kids and this includes discussions about things like screen time, digital wellbeing and discovering quality apps, games and activities. So Google created a website with detailed guides that spell out how to understand and control your kid’s use of technology.

Zoom out: It’s good to see big tech companies caring about the healthy use of their products.

Want to get smarter about fintech in Africa? Listen to the Decode Fintech Podcast by Paystack!

The moments that truly make a company are when things don’t go as planned. In Ep. 4, Francis Appiah, Operations Manager at expressPay 🇬🇭 shares how his team leverages near-disappointing moments to turn customers into loyal brand advocates. .

A year ago the Nigeria-based last-mile delivery, logistics and transportation start-up was in the same shoes as Nigerian crypto exchanges, facing the hurdles of regulation.

In response to the ban by the Lagos state government, it had to lay off 80% of its workforce and pivoted to delivery. In the midst of all this, the pandemic happened which negatively impacted Nigeria’s economy. Then the company tragically lost its founder, Fahim Saleh, in July 2020.

All through these, the company found a way to turn around its fortunes, thanks to Gokada’s team and its Chief Operating Officer Nikhil Goel who was just appointed as its new CEO.

Goel first joined Gokada in 2019 as a Vice President of Rides, bringing with him extensive experience in the global last-mile logistics space. In India, Nikhil was General Manager of unicorn food delivery start-up Zomato, and then as Head of New Verticals at SafeBoda in Kenya.

He’s been responsible for leading the company since Gokada tragically lost its founder, Fahim Saleh, in July 2020. According to Gokada, Goel has helped the company increase its revenue by 10X and grow it’s delivery order volume by 100X, enabling the company to reach profitability in the past 12 months.

In 2000, the first Bluetooth headset was sold and the rest they say is history

According to global market intelligence firm IDC, 444.7 million wearable devices were sold in 2020.

Wearables, as the name implies are gadgets that can be worn as accessories, embedded in clothing, implanted in the user's body, or even tattooed on the skin. Think of headsets, smartwatches and others.

2020 was the year that hearables (Smart headphones) became the must-have device as they provided a degree of privacy with most people working from home.

Hearables were the largest category of devices with a 64.2% share of shipments, followed by smartwatches with a 24.1% share.

The Top five wearables sellers in 2020

Apple: Apple is the biggest player on the market, it shipped 151.4 million wearable devices controlling 34.10% of the market.

Huawei: While still struggling with the sanctions imposed by the US, Huawei came in third selling 43.5 million devices, with a 9.8% market share.

Samsung: Closing in on Huawei, the world’s top smartphone seller Samsung shipped 40 million wearables, it has a 9% market share.

Fitbit: A pioneer in the wearable market, Fitbit which was recently acquired by Google, sold 12.9 million wristbands in 2020, controlling 2.9% of the market. 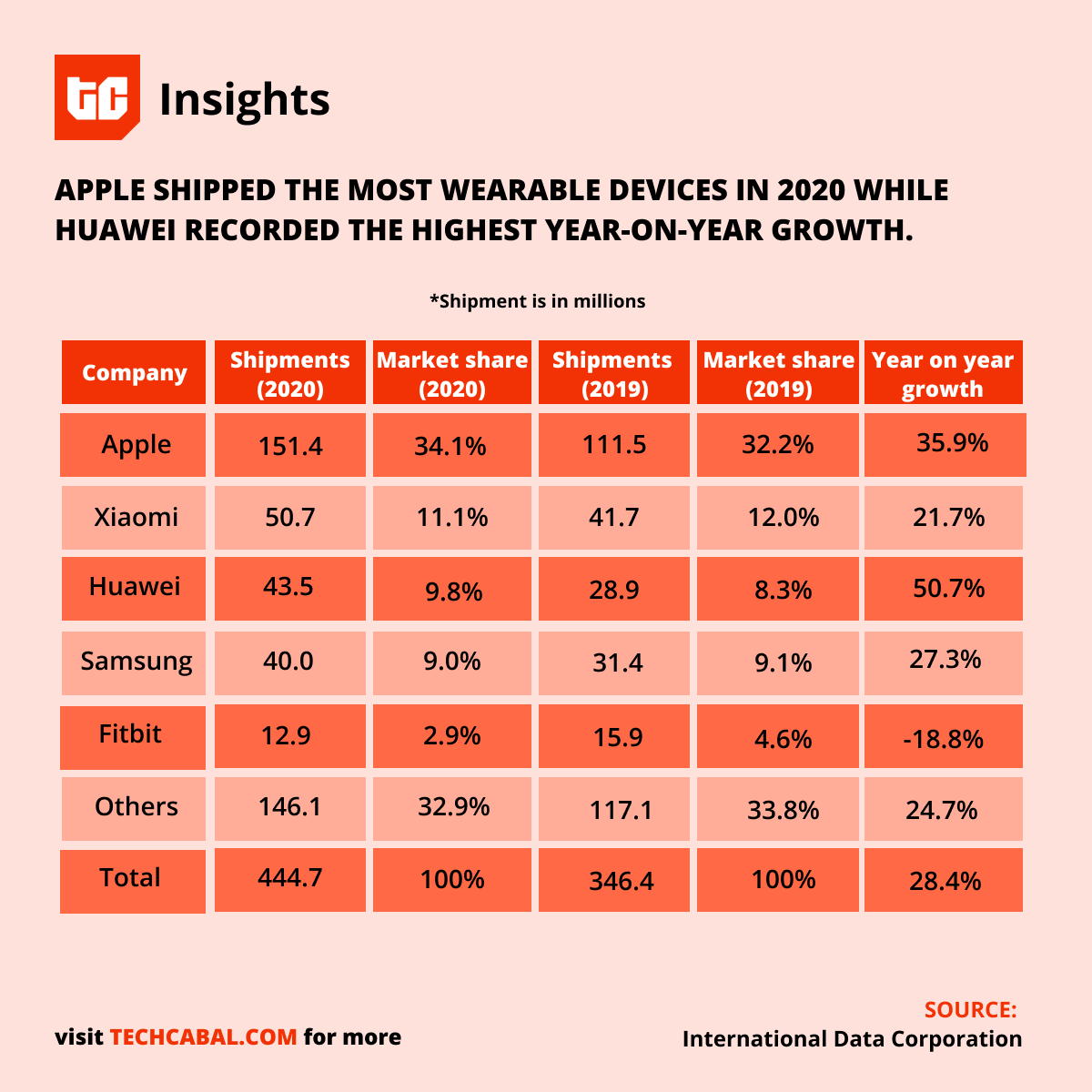 Big Picture: Apple wasn’t the first to make a smartwatch or a headphone but it’s found a way to capture the market. Instead of just relying upon the bespoke engineering that goes into the making of a smartwatch, Apple made sure that it marketed the health and wellness features of the Apple Watch. For Airpods, Apple made it appealing to use.

In all this, Apple’s market share of airpods is falling due to lower end alternatives but its sales are increasing as the wearables market keeps growing.

SME.NG, Nigeria’s gender lens impact investment platform is launching its e-marketplace (the Ebi Market). The online platform will democratize access to finance and e-commerce for women entrepreneurs in Nigeria.

The Ebi Market will be unveiled on the 25th of March 2021. To be a part of the event, please registerhere.

This Friday, March 19 by 11 am, we’ll be having a chat with Tsakane Ngoepe, Chief of Staff at asset-financing platform M-KOPA. Among other things, Tsakane will be discussing how to get more women in senior leadership in African tech.

Every year, there’s new data showing the dearth of women in top management roles in African companies and explaining why the continent needs more women functioning in senior capacities, but how do we actually get more African women to the top of the ladder?

On this TC Live episode, Tsakane will share her thoughts on getting more women involved in Africa’s tech industry, as well as key lessons for African founders and executives. She will also discuss how startups can manage complexities as they grow.

what else we're reading

6 April, 2021 IN PARTNERSHIP WITH Good morning ☀️ ️ Welcome back from the Easter break! What did you get up to? I’ll tell you what China’s been up to – creating their own cryptocurrency. In today’s edition: NIN deadline extension Meet TERAWORK Kenya’s highest number of mobile subscribers LG pulls out of smartphone business […]

On Sunday, MTN Nigeria said that it had agreed to restore commission to 4.5% and subscribers will now be able to use their banks to buy airtime once again. News reports suggest that this resolution has the CBN’s hands all over it.

2 April, 2021 IN PARTNERSHIP WITH Good morning ☀️ ️ It’s Friday and I’m sure, like us, you’re looking forward to the long weekend. In today’s edition: #EndSARS activist speaks about her life and aspirations Apple pay comes to Africa Who sold the most Laptops in 2020? TC Insight: Funding Tracker #EndSARS activist, Rinu, speaks […]