Digital Nomads: From Lagos to Paris, the city where banks show Fintechs how it’s done 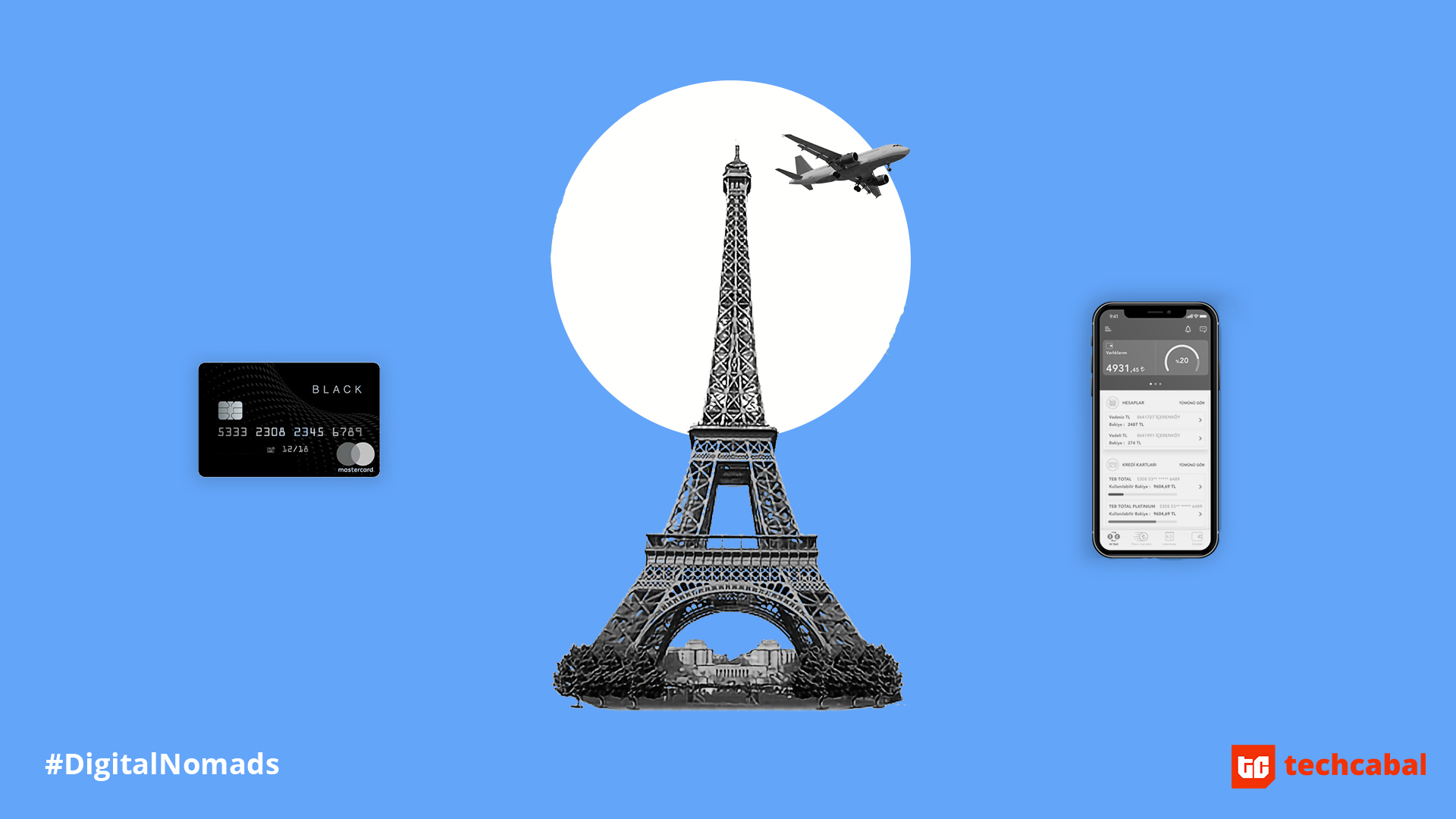 Every week, we speak to Digital Nomads about their tech experiences across countries. Our conversations take us from Saudi Arabia to Somaliland, or from Ethiopia all the way to China. Their experiences are often different, but the common thread is that these conversations are revealing.

I’m speaking to *Jack, a Nigerian who went to study in France over 7 years ago and now calls Paris home. He tells me, “I think if you had talked to me ten years ago, I would have never thought I will live abroad and stay for a long time.”

The next step for Jack was an MBA. “I was getting tired of Lagos, I wanted a very long holiday and I still did not waste the months or year I would spend”

Jack’s considerations in choosing where to study: I had seen everything about Lagos, and I was tired of the people, the things, the food. I wanted a short MBA program, so Canada and the US were out of it.

It helped that there were no language requirements to worry about in France as the MBA was taught in English language.

On studying for a Masters program in France: I think that when you get to Europe, at the masters level, most of the courses are taught in English, especially when it comes to management courses, because they are training their own citizens to cater to an international market.

With his decision made and his bags packed, we talk about airports, leaving Nigeria and the difference in the airports in Lagos and Paris.

Last week, Victor also shared his experience of the Charles De Gaulle airport and why it is the best airport he has ever been in. But Jack provides some extra details.

How big is the Charles De Gaulle airport? The airport has three terminals and train stations that run within the airport. You can’t walk from terminal 2 to terminal one 1, and vice versa because it’s too far. You have to take a train. In terminal 2, again there’s like terminal 2A, 2B, 2C. I think it gets to 2G. I had to take a train to get my luggage.

“Just landing in Paris, you could see a huge difference;orderliness, no crowd, even all the way to the baggage room, different directional signs in different languages. On the train as well, there were announcements in, English, French, Spanish, I think even Chinese.”

Despite how impressive the Charles De Gaulle airport sounds, Jack says it is not the most impressive airport he’s been in.

“If I was going to really rank them, there’s a new Istanbul airport, it’s big and beautiful, they have really nice stuff and stores,  all duty free. “

“There’s also the new Senegalese airport in Dakar, so if you come back to Africa, it’s also really good.”

Jack says that in most airports he’s been in, it is easy to get yourself up with a SIM card and register the SIM.

“You register on the spot, but you buy the recharge. It’s like an information desk. You get the sim for free, then you buy data.”

As a newbie, Jack went with a telecom service that offered great rates for international calls but in time, he realized he was getting a sore deal.

This was despite having a Wi-Fi service at home. His data struggles give an insight to city life in Paris and how dependent it is on having internet service.

“I realized I was spending about 80 Euros per month because I use a lot of internet”. In the city you need your phone to use the maps; you have apps for the trains to know when the trains or buses are coming.

“For mobility, if you live in the city, it’s well connected in terms of public transport, so you’re going to take a lot of buses and trains.”

It’s why a lot of people don’t buy cars. It’s easy to move around with public transportation  and to move, you need your phone. The phone shows you the fastest way to go based on where you’re standing.

Moving around Paris: The metro is the most popular way of getting around. Bicycle sharing and scooter sharing apps are also common in the city.

It shows how important mobile data is. Eventually, Jack moved to a telecom service that promised more data for €19 and also didn’t tie him to a contract. Away from mobile internet, many telecom companies provide package deals that most people take advantage of.

Two of such telecom companies are Free and SFR.

With his internet troubles sorted, we talk about his first impression of Paris and well as how much technology there is in the city.

Jack’s first impression of Paris: When I got to Paris, I was kind of disappointed. There’s nothing spectacular about it. The only difference is orderliness. I didn’t see anything that really blew my mind.

It’s not really a clean city. Maybe if you’re coming from a smaller city in Nigeria that’s when the city life here will seem strange.

What he describes is called the “Paris Syndrome”, a shock travelers experience when they find out that Paris is not as beautiful as they envisioned.

For technology in everyday life, I ask him to compare Paris with China, a country where technology is in everything.

“In terms of technology, all these things you mentioned in China are in Paris. there’s contactless payment. Since I got to France, my credit card has always been contactless, there’s Apple Pay and all that stuff.”

But he argues that despite technology being available, many residents try to avoid using tech where they can.

“You have an educated population and a very high tax system, and so when you pass things through technology, it means you can track it.”

With people trying to pay less taxes where they can, they try to make sure their income doesn’t pass through the system. Jack argues that while France has QR codes and all that, people don’t want to pay with it because they don’t want their expenses or income to be tracked.

It means that there’s still a good deal of cash transactions thanks to people trying to pass money below the system.

It is also impossible to talk about technology in France without talking about regulations.

“The European Union is very regulated. For example, you guys in Lagos can transfer money to someone in Lagos and they’ll get it immediately. You can’t do that here, it takes two days.”

The reason it takes two days for example is that if you send money to someone, you have 24 hours to cancel that transaction. The recipient’s bank has 24 hours to see the money that is coming in and try to analyze the data and see with the person’s projected income if the transfer is suspicious.

It gets us to talking about banking and the differences that exist between Nigeria and France. Banking and Fintech are two of the most exciting sectors in Africa in recent times, but France takes banking to a different level.

“I always joke that my bank is my father in Europe, the relationship is personal. Even as a student, I had my own account officer.”

Jack’s anecdote: The first year I was here, it was the period where Buhari had this policy where you couldn’t spend more than $100 per month. So, there was some money I was expecting but it hadn’t gotten to me.

So I wrote a message to my bank concierge via the bank app explaining the situation. At the bank, I signed an insurance policy and the bank loaned me some money. They just trusted me based on what I said, so that’s it, the bank is always there to help you.

Despite the dominance of traditional banks, digital banks are also popular in France. N26 and Revolut are two neobanks that are popular because they help you avoid banking fees outside the European Union.

“I used Revolut the last time I was in Nigeria. Within Europe, you’re fine, but if you go from the EU to outside the EU, it’s better to use these neo-banks.”

The traditional banks maintain their dominance by providing a variety of services.

“My bank has always been there for me. The apartment I’m in now, everything was furnished by my bank. There’s that loyalty which Fintechs cannot give, they don’t have those pockets. It’s not just about accumulating profits like Nigerian banks do, they invest in you.

When I came here as an MBA student, they gave everybody $100 for free. I can’t imagine moving my main accounts to a fintech.”

This kind of personal service and loyalty is what the fintechs cannot offer. In the end, we talk about how Lagos and Paris are doing in terms of technology. Where do they rank on a scale of 1-10?

“In terms of technology, I’ll rate Lagos up to a 6. We use a lot of technology to solve our problems: mobility problems, the speed of transfers here solve the problem of trust. It’s something you take for granted until you leave Nigeria.”

“I had a classmate in Nigeria who had this app that connects you with a lesson teacher. You wouldn’t find that in Paris, people go to school and after that, they’re off to play.”

“I’ll give Paris a 6 because technology here doesn’t solve problems. I don’t really see the problems it’s solving. When there’s a new technology in Lagos, you can see what it’s solving, in Paris, it’s often because it’s trendy.”

*The interviewee’s name has been changed at his request.

Looking to share your tech story? Send me an email: Muyiwa@bigcabal.com