This month started off on a sour note with news of yet another coup d’etat in Burkina Faso.

Eight months after Lt-Col Paul-Henri Damiba overthrew the democratically-elected Burkinabe government and installed himself as (military) president of Burkina Faso, yet another army official has overthrown Damiba.

Counting the alleged attempted coup in Mali, this is the third coup in Africa this year.

THE LEADING TECH MOVES FROM SEPTEMBER

Since February 2022, we’ve reviewed the leading tech moves from countries across Africa.

While some months like June are filled with news of tech layoffs, others like July come with fraud allegations.

September was, by all accounts, a chill month. So what were the leading tech moves announced in it? 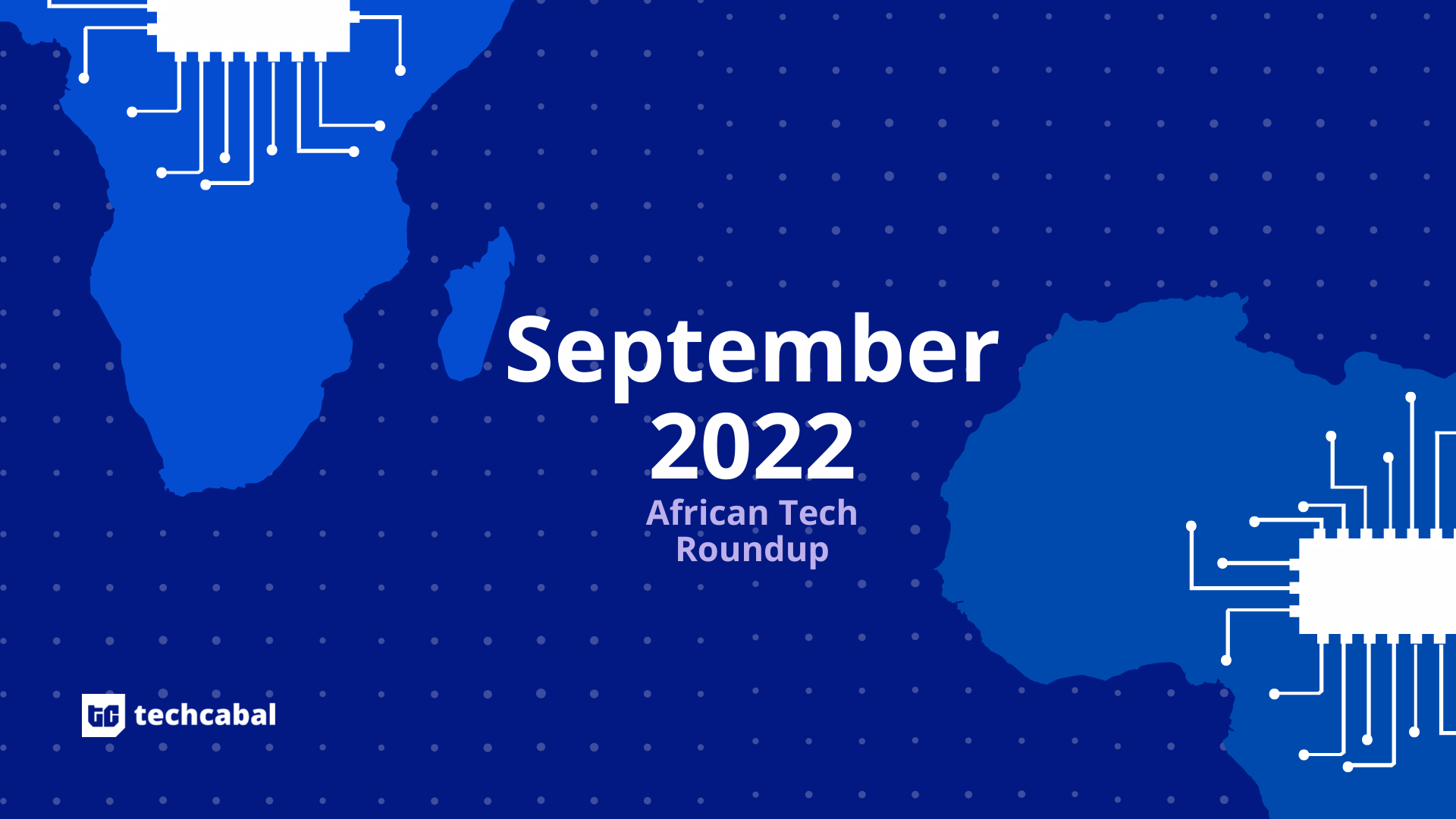 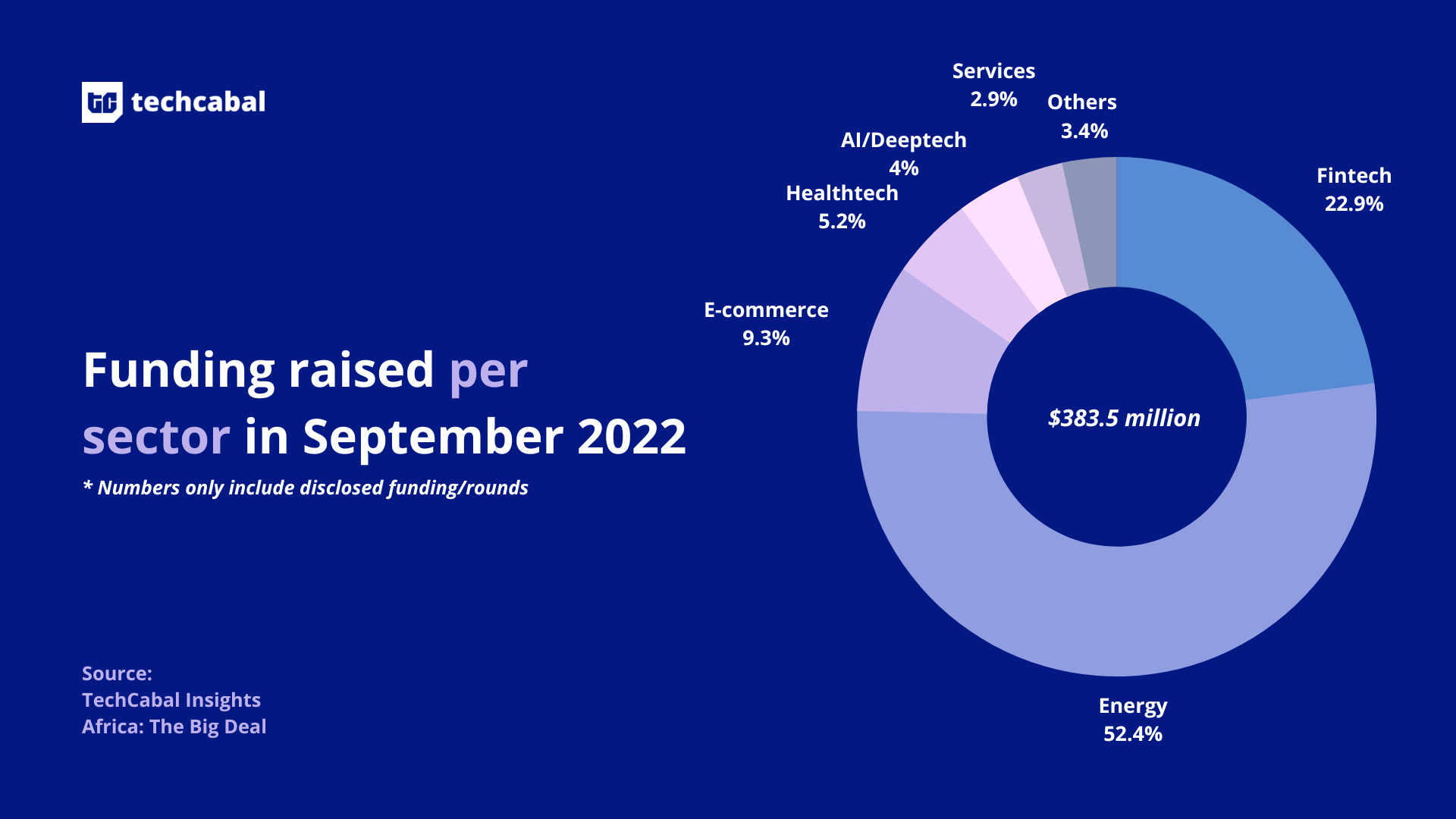 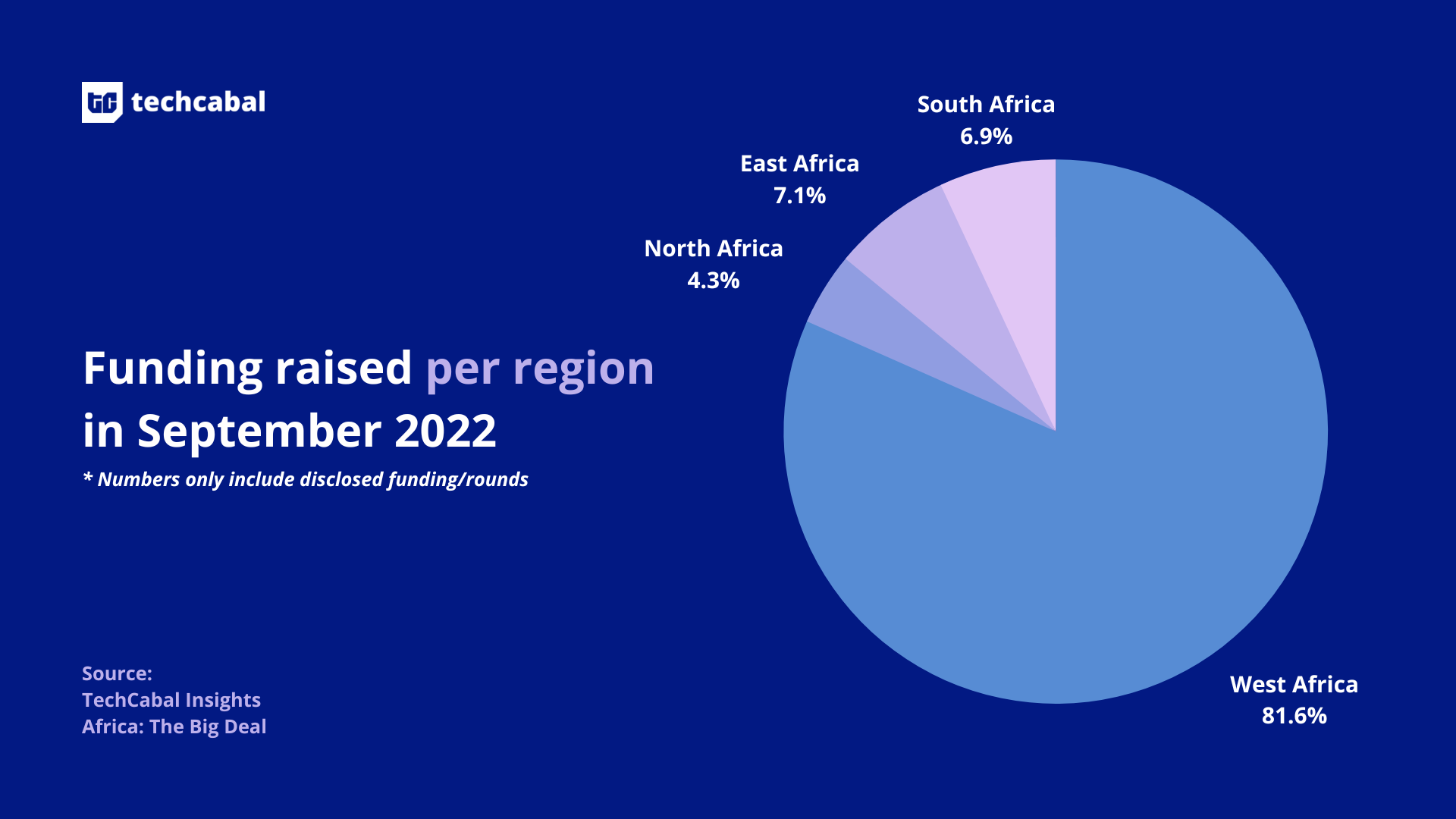 The top five disclosed deals of September 2022 are

Note: This data compiles only funding deals announced in September 2022. Raises are often announced later than when the deals are actually made.

The news of the fees was received with negative feedback on and offline, and the Commission promptly announced that it would suspend the safety audits and, instead, work to train stakeholders.

Kenya’s National Transport and Safety Authority (NTSA) planned to enforce a regulation that caps commission for all ride-hailing companies in the country at 18%. Uber is appealing to the Supreme Court to nullify the regulation.

Uber might be for the legislation but its drivers are not. In September, ride-hailing drivers staged another protest against high commission fees in Kenya.

In September, telco Safaricom announced that it would be splitting from its mobile money service M-Pesa by January 2023.

The announcement comes two years after the enactment of Kenya’s Information and Communications (Amendment) Bill, which sought to split all telcos from their mobile money businesses.

In September, the 6-month ultimatum the Central Bank of Kenya (CBK) gave for all digital lenders to apply for operational licences lapsed.

Only 10 digital lenders, although the CBK did note that it received over 228 applications and is still reviewing many other applications.

The partnership will enable customers to transfer money online from any bank account to an Orange Money wallet, even if they don’t have Orange Money accounts.

As part of Google for Startups Black Founders Fund, startups like Eversend, Zuberi and Norebase will be part of a 6-month training programme and receive equity-free funding between $50,000 and $100,000.

In relation to the $59.2 million frozen by Kenya’s Asset Recovery Agency (ARA) in fraud investigations levied against Nigerian startups in Kenya, over 2,000 Nigerian investors have petitioned courts in Kenya to have their monies unfrozen.

The 2,468 Nigerian investors claim they were swindled to the tune of Ksh 1.44 billion ($11 million) by a dubious person via transactions on Flutterwave, one of the startups being investigated by the ARA. The investors now want their money unfrozen.

Starting in October, Tanzanians will no longer have to pay transfer fees on withdrawal of cash through bank agents and ATMs for Tsh30,000 ($12.81) and below.

The acquisition has been in the works since 2019 and Daystar Power caved in due to the rising demand for its services.

In South Africa, the fintech plans to implement internet banking solutions while its foray into Nigeria and Kenya will see it offering mobile money and USSD services.

On the tech regulations side, the Ugandan parliament in September passed the Computer Misuse (Amendment) Bill, 2022 which many critics believe will be used to suppress digital rights and free speech.

The tax, a 5% levy, was supposed to go into effect this year but communications and digital economy minister, Isa Pantami, argued that the telecommunications sector is already overtaxed.

This launch comes after a pilot phase of this logistics service conducted in Ghana a few months ago.

Across the globe, the financial services industry is faced with competition from fintech startups. They leverage technology to increase access to financial services to previously underbanked and unbanked segments of the population. Nigeria is no exception to this rule. Buoyed by the successful acquisition of local startup Paystack by payment giant Stripe in 2020, fintech startups in the country received over 60% of the $1.3 billion raised by Nigerian startups last year.

The success achieved by these startups lies a great deal in the path created by commercial banks in the country in the last two decades.

“Nigerian banks were the incubators or early supporters of Fintechs in Nigeria. For example, Flutterwave grew out of Access Bank. Teamapt grew out of Fidelity Bank and Wema Bank. Paystack’s connection with banks was critical for early success,” Adedeji Olowe, founder of Lendsqr and a Trustee of Open Banking Nigeria, shared in a text with TechCabal 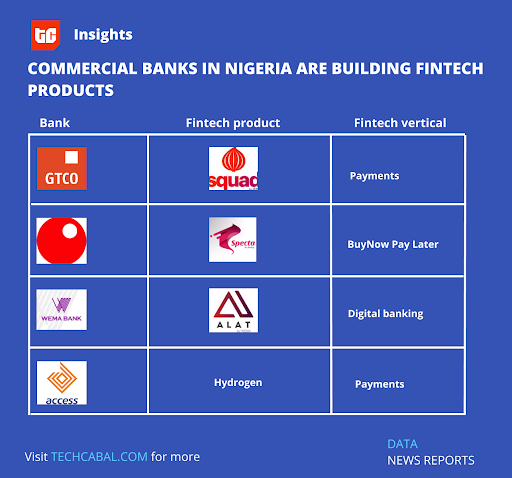 In 2020, Nigeria’s top five banks, commonly known as FUGAZ made $1.56 billion in profits, a huge disparity compared to some fintechs who operate at a loss despite their sky-high valuations. Yet, a huge financial war chest doesn’t always equate to market dominance in unfamiliar terrain.

“Frankly, the banks have no chance of success. They would pump money into these fintechs and most of them would fail abysmally. Banks would run the fintechs like a bank; slow and full of red tape. Nothing would move fast. Customer experience and support would be poor. Merchants and other users who are used to a better experience with fintechs wouldn’t care. Banks would not be able to attract the type of talent that can make things happen. Smart talents are scared of banks,” Olowe further shared

As opposed to competing with fintechs, banks could partner with them to maximise their comparative advantages and achieve their objectives. Yet the result of previous partnerships serves as a cautionary tale. The difference in organisational outlook and structures reduces the success of these partnerships.“Banks and the fintechs don’t have the same DNA, the difference which can be papered over with simple partnerships but which would be disastrous with a closer tie-in required for the type of partnerships that banks want. For example, fintechs are lax with processes and governance while banks are slow, plodding, and bureaucratic,” Olowe concluded.

It’s still a bit early to predict the outcome of banks’ foray into the fintech space but the status quo is unlikely to face any form of disruption. Although, more partnerships between banks and better-governed fintechs will spring up in the coming years.

APPLY FOR THE YOUTHADAPT CHALLENGE

The 2022 YouthADAPT Challenge is open for entries. The Global Center on Adaptation (GCA) and the African Development Bank (AfDB) are awarding $100,000 grants each to 20 enterprises that offer climate change adaptation solutions in Africa. 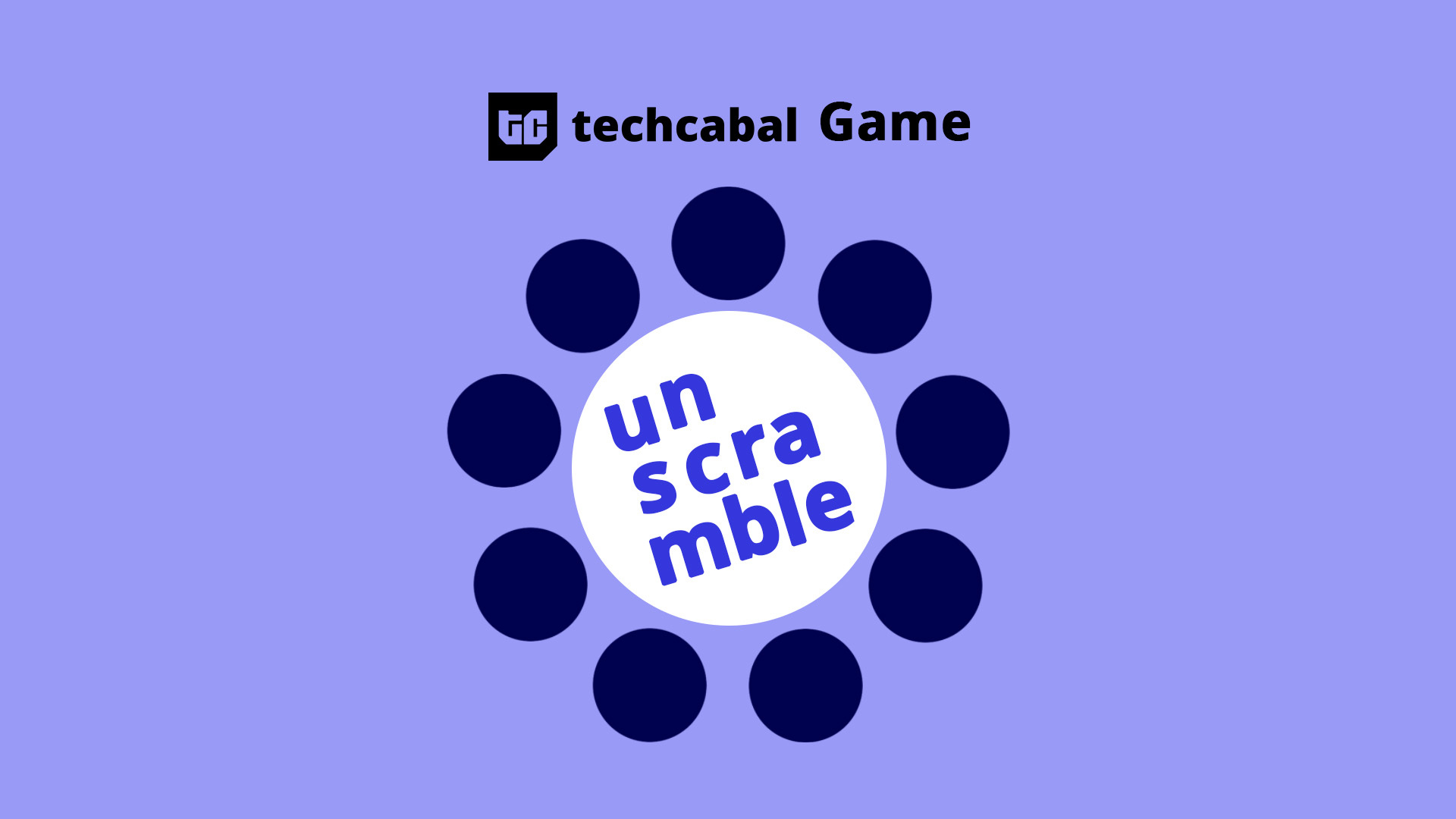 Investors require startups to have technical co-founders. But is that necessary?

Have Nigerians found a new crypto heaven or hell in PiCoin? 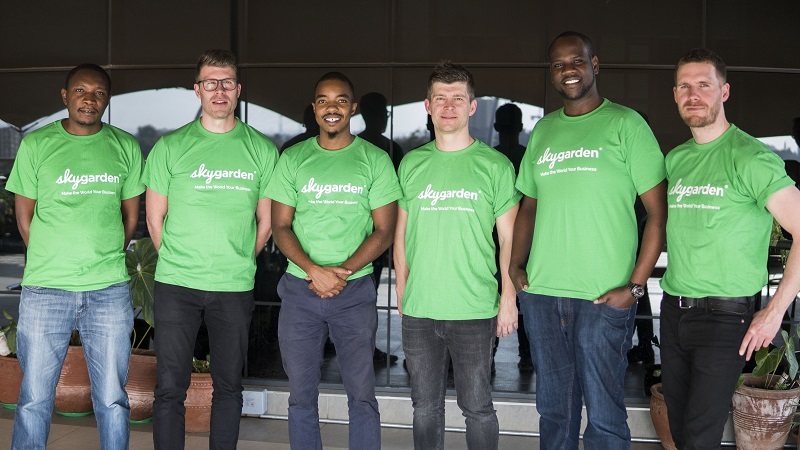